Every two weeks, late in the evening, people are able to see a swarm of strikingly bright points of light crossing the night sky. An array of images and spectacular videos of such sightings circulate on social media. Word soon gets around that these glowing strings of light are not, in fact, an alien fleet. Rather, they are the Starlink satellites from SpaceX, the US space company run by Elon Musk, streaking across the night sky in 'trains'.

This visual spectacle and the ambitious project behind it, which is on an enormous scale, are fascinating. Felix Huber and Manfred Gaida explain the background to the project in an interview. They talk about the impact that these strings of light have on astronomy and space, and answer the questions that people sent to DLR when it put out a call on social media.

Felix Huber is Director of DLR Space Operations and Astronaut Training. This is the central institution for spaceflight operations in Germany. Manfred Gaida is an astronomer and researcher at the DLR Space Administration and an expert on satellite-based space research and optical astronomy.

This interview was conducted by Philipp Burtscheidt.

The eighth batch of 60 Starlink satellites is scheduled to be launched next Sunday, 17 May 2020. What is the purpose of the Starlink constellation?

Huber: Elon Musk wants to enable satellite internet access – first for the United States and Canada, and later for the whole world. For remote regions, this may be the very first chance of getting high-speed broadband internet. Musk needs thousands of satellites to maintain a connection without interruptions and at a high bandwidth. The satellites are placed in low orbits, at approximately 500 to 600 kilometres from the surface, so many satellites are required to achieve full Starlink coverage.

A Facebook user writes: I have seen one of the 'trains' several times. But the satellites were always a few seconds apart. It did not look like the many videos on YouTube. When are we likely to see the closely spaced 'string of pearls' formation? Does this only occur shortly after launch, with them later drifting apart?

Huber: That is exactly what happens. The satellites only appear close together just after they are launched. After that, they are 'pulled apart' by difference in their speed or the on-board engine, until they are evenly distributed around the orbital plane. After they are released, you see the 'string of pearls' formation in the sky for a little while, and – appearing somewhat larger and further away – the spent upper stage of the launcher.

Last September, ESA's Aeolus satellite had to perform an evasive manoeuvre in order to avoid colliding with a Starlink satellite. Near-Earth space is getting quite full.

Gaida: Once the Starlink system is fully operational, there will be approximately five times more satellites in orbit than are currently in space. As of 30 September 2019, the figure was 2218. Amateur astronomers back in the 1970s would only have been able to spot or photograph a satellite by pure chance. Taking a picture of a random satellite track was a real source of pride. Things are very different today.

Huber: It is getting very crowded. There are currently already 30,000 pieces of debris in orbit. The Starlink system will add 12,000 satellites to that situation. A certain percentage of failures is expected. Defective satellites cannot be 'de-orbited' in the normal manner – that is, deliberately made to re-enter the atmosphere and thus burn up. If more than one to two percent of the satellites fail, this will cause a cascade effect, referred to as the Kessler syndrome. This is where pieces of debris crash into one another, creating an ever-larger field of debris. According to current reports, approximately five percent of the Starlink satellites are not functional. That is a critical level.

What impact will the further increase in numbers of satellites have on optical and radio astronomy?

Gaida: A few studies on megaconstellations have now been carried out in the field of astronomy. One says that up to three percent of optical images will be unusable before sunrise and after sunset, when the reflections from satellites are at their most intense. However, other figures are imminent. Starting next year, the entire night sky will be scanned every three nights from the Vera C. Rubin Observatory in northern Chile as part of the Legacy Survey of Space and Time (LSST). This will use a special, wide-angle camera, and scientists will check for any changes. Projections for these wide-angle sky surveys suggest that 30 to 50 percent of the images will be affected. That is a considerable number. Several observatories are now working with SpaceX to develop countermeasures.

Radio astronomers will also be affected, as their sensitive receivers may be disrupted by communications signals from the satellites as they pass overhead. Just consider how sensitive radio astronomy receiving systems are. For example, for the 100-metre radio telescope in Effelsburg, a mobile telephone on the Moon would be the third-strongest source of radiation, after the Sun and the remnants of the Cassiopeia A supernova.

We were asked two questions about visibility and countermeasures. What technologies are available to reduce the brightness of a satellite in the night sky? Can it be 'camouflaged'? And to what extent is SpaceX's stated intention to adjust the angle of the solar panels so that they reflect less light actually feasible?

Huber: You could indeed 'camouflage' the satellites by darkening them. However, if they are dark, they heat up more due to solar radiation. That heat then needs to be re-radiated. The solar panels will always reflect light to a greater or lesser extent, depending on the angle. Both options are somewhat limited.

Satellites in orbit invariably have an impact on the entire world, yet missions are approved by national authorities. For example, the 12,000 Starlink satellites were approved by the Federal Communications Commission (FCC), a US government agency. Someone on Twitter has asked whether anyone can veto satellite missions.

Huber: No. In aviation, countries have sovereignty over their territory and can issue rules for their own airspace. No such thing exists for space. National supervisory authorities approve a satellite launch. Once it has been approved, it can fly.

Like controlled airspace, we would need a controlled expanse of space, with international coordination. However, altitudes below 400 kilometres could remain uncontrolled, as objects there are more subject to the effects of the residual atmosphere. This area 'tidies itself up', so to speak, as satellites there automatically lose altitude due to atmospheric resistance and eventually burn up. This means that 'littering' isn’t such a big problem in low orbits as it is higher up.

Why does Starlink need so many satellites?

Huber: For global network coverage, SpaceX would need a couple of thousand satellites – far fewer than 12,000. They require this enormous quantity in order to increase the available bandwidth. That said, there are other concepts that make do with significantly fewer satellites.

Gaida: The 12,000 are the satellites that have been approved so far; another 30,000 are planned. The entire sky has an area of approximately 42,000 square degrees, so that, statistically speaking, there will be a Starlink satellite in every square degree. One square degree equates to the space that four full Moons, arranged as a square, would take up in the sky.

Sustainability is a real buzzword at the moment in business, politics and society at large. How will SpaceX deal with the issue of space debris?

Huber: The satellites have a de-orbiting mechanism and an electric propulsion system. On average, a satellite will 'live' for five years. After its service life is up, the thrust of its propulsion system should bring it low enough for it to re-enter the atmosphere relatively quickly. But what happens if the de-orbiting controls fail? In that case, it could take a lot more than the required 25 years for it to descend far enough to burn up.

To give some figures, assuming a five-year service life and 30,000 satellites, 6000 satellites will need to be replaced every year. This means that the 6000 old satellites will increasingly be moving through lower orbits every year. Considerable numbers will end up doing this over the years. They will cross paths with lower-flying systems, including the International Space Station (ISS). This is seen in a very critical light.

Gaida: On top of all that, more megaconstellations are also being planned. Just think of Amazon, Samsung and One Web. Such missions will amount to many more thousands of satellites.

Huber: Exactly. Another issue is the electric propulsion system, with which collision avoidance manoeuvres are performed more slowly than with chemical engines. But it is often the case that evasive action needs to be taken at very short notice and the orbit must be altered quickly. The more crowded space becomes, the more important it is to have concepts for actively removing space debris. Once the Kessler syndrome emerges, we run the risk of low-Earth orbit (LEO) becoming permanently cluttered.

This is a global problem that will be difficult to resolve through national decision making. What is happening at an international level, whether politically or in terms of space research and industry?

Huber: Exchanges of information are taking place. For example, the major space agencies are notifying each other of the positions and dimensions of pieces of debris. Of course, there is no 'towing service' or the like in space at the moment.

Gaida: Apparently, SpaceX is now working with two major astronomical organisations: the International Astronomical Union (IAU) and the American Astronomical Society (AAS). They receive data that they can use to create simulations in order to quantify the effects of disruption and put forward suggestions on how, for example, satellites could be darkened, so that they reflect less sunlight, within the limits of what is feasible.

Huber: However, these measures focus on optical disturbances. They will not solve the interference problems facing radio astronomers, or the risk of collisions and debris.

Do you have any suggestions?

Huber: It could be regulated in such a way that very large satellite constellations are only permitted to fly in very low orbits – up to 300 kilometres. At these altitudes, they would have to contend with atmospheric resistance, which would have to be compensated for with an electric propulsion system. If the system failed, the satellite would automatically descend and burn up. My colleagues have jokingly dubbed these 'Huber orbits'. It would be the exact opposite of what is happening these days, with de-orbiting having to be actively initiated at greater altitudes.

Thank you, Professor Huber and Dr Gaida. With your answers, you are sure to have provoked new questions and provided ample food for thought. 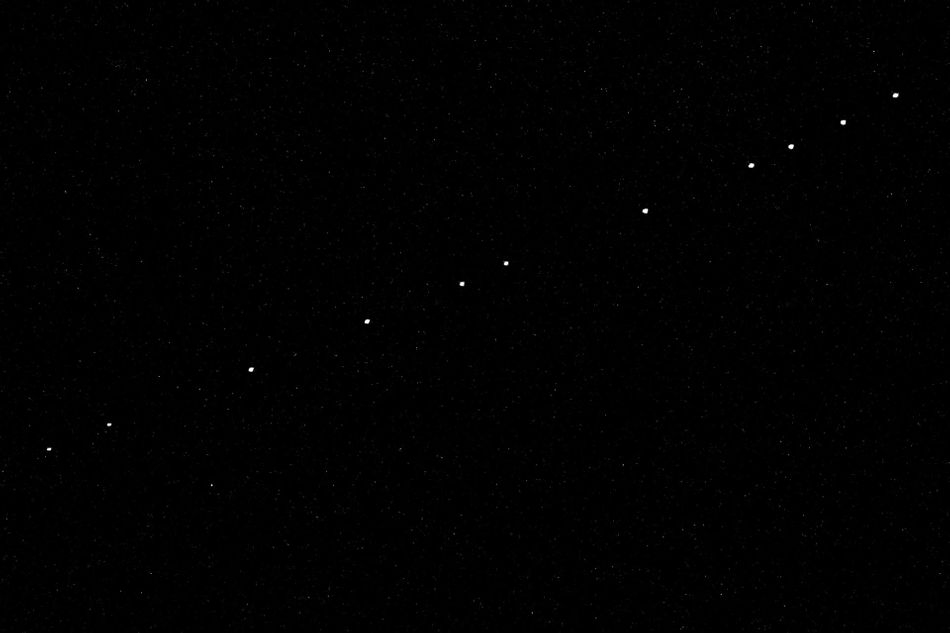