Current research on flexible electronics is paving the way for wireless sensors that can be worn on the body and collect a variety of medical data. But where do the data go? Without a similar flexible transmitting device, these sensors would require wired connections to transmit health data.

Huanyu “Larry” Cheng, Dorothy Quiggle Career Development Assistant Professor of Engineering Science and Mechanics in the Penn State College of Engineering, and two international teams of researchers are developing devices to explore the possibilities of wearable, flexible antennas. They published two papers in April in Nano-Micro Letters and Materials & Design.

Like wearable sensors, a wearable transmitter needs to be safe for use on human skin, functional at room temperature and able to withstand twisting, compression and stretching. The flexibility of the transmitter, though, poses a unique challenge: When antennas are compressed or stretched, their resonance frequency (RF) changes and they transmit radio signals at wavelengths that may not match those of the antenna’s intended receivers.

“Changing the geometry of an antenna will change its performance,” Cheng said. “We wanted to target a geometric structure that would allow for movement while leaving the transmitting frequency unchanged.”

The research team created the flexible transmitter in layers. Building upon previous research, they fabricated a copper mesh with a pattern of overlapping, wavy lines. This mesh makes up the bottom layer, which touches the skin, and the top layer, which serves as the radiating element in the antenna. The top layer creates a double arch when compressed and stretches when pulled — and moves between these stages in an ordered set of steps. The structured process through which the antenna mesh arches, flattens and stretches improves the overall flexibility of the layer and reduces RF fluctuations between the antenna’s states, according to Cheng.

Energy efficiency was another priority. The bottom mesh layer keeps radio signals from interacting with the skin. This implementation, beyond preventing tissue damage, avoids a loss of energy caused by tissue degrading the signal. The antenna’s ability to maintain a steady RF also allows the transmitter to collect energy from radio waves, Cheng said, potentially lowering energy consumption from outside sources.

The transmitter, which can send wireless data at a range of nearly 300 feet, can easily integrate a number of computer chips or sensors, Cheng said. With further research, it could have applications in health monitoring and clinical treatments, as well as energy generation and storage.

“We’ve demonstrated robust wireless communication in a stretchable transmitter,” Cheng said. “To our knowledge, this is the first wearable antenna that exhibits almost completely unchanged resonance frequency over a relatively large range of stretching.” 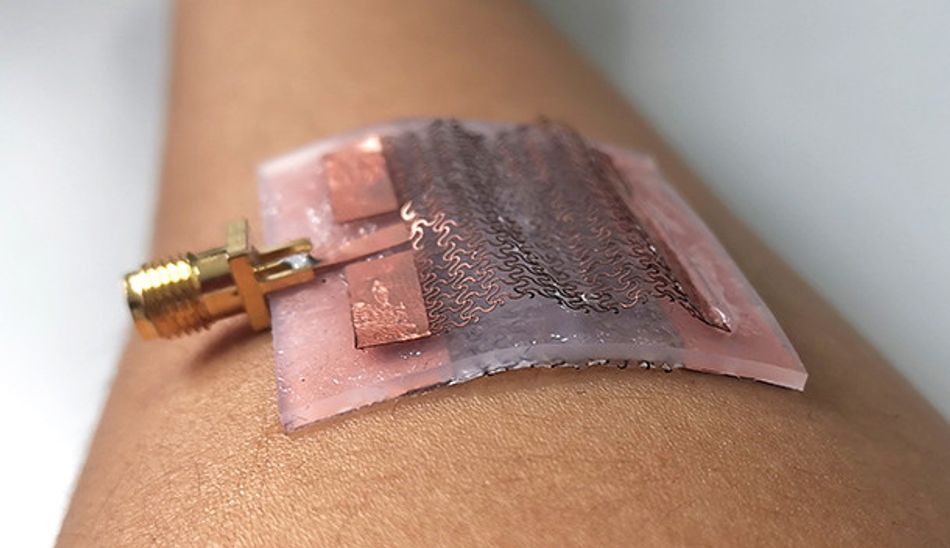 The wearable transmitter is designed to compress its top layer in a double arch pattern, shown here, to respond to movement without compromising signal transmission. Image: Image Provided By Huanyu Cheng

After developing the stretchable antenna prototype, Cheng analyzed it with another research team. The researchers aimed to identify new fundamental pathways for fine-tuning such a device that could be applied to similar, future research.

“We wanted to investigate the problem by examining the connection between mechanical properties and electromagnetic behavior,” Cheng said. “Highlighting this relationship can reveal insights about the influence of different parameters on antenna performance.”

The team fabricated an antenna with layers and a mesh pattern similar to their previous prototype but lacking the double-arch compression structure. They measured the deformation of the antenna as the mesh was stretched at different intervals, then used computer simulations to examine the relationship between the deformation and the antenna performance.

To simplify the analysis of the antenna’s radio signal transmission, the researchers used a mathematical technique to convert certain measurements — such as the width and angle of the repeating mesh pattern — into constant values. With this process, called normalization, researchers can focus on the relationship between specific variables by negating the influence of the normalized variables.

The team found that the normalization of different variables provided several avenues for customizing the antenna’s performance. They also found that the simulated geometry of the mesh could produce different outcomes, even with the same set of normalized variables.

Though the researchers analyzed wearable antenna properties, Cheng emphasized that their methods could be applied to other radio frequency devices.

“We’ve shown that you don’t have to be limited to exploring the effects of one normalized variable,” Cheng said. “Using this method, we can tailor the properties for other antennas or devices that communicate using microwaves.”

In this video, researchers test the ordered structural changes as an earlier prototype is compressed and stretched. Unlike the final wearable transmitter, this device creates one arch when compressed instead of two. Video Provided By Huanyu Cheng

Looking toward the future

Cheng and his collaborators will continue to research ways to facilitate the development of these devices through application-based studies as well as further fundamental explorations to optimize the design process.

“We are really excited that this research could one day lead to networks of sensors and transmitters worn on the body, all communicating with each other and external devices,” Cheng said. “What we’re imagining is science fiction at the moment, but we are working to make it happen.”

Self-powered sensor can be integrated into soft robots, smart clothing

Thin tissue grafts and flexible electronics have a host of applications for wound healing, regenerative medicine and biosensing. A new device inspired by an octopus’s sucker rapidly transfers delicate tissue or electronic sheets to the patient, overcoming a key barrier to clinical application