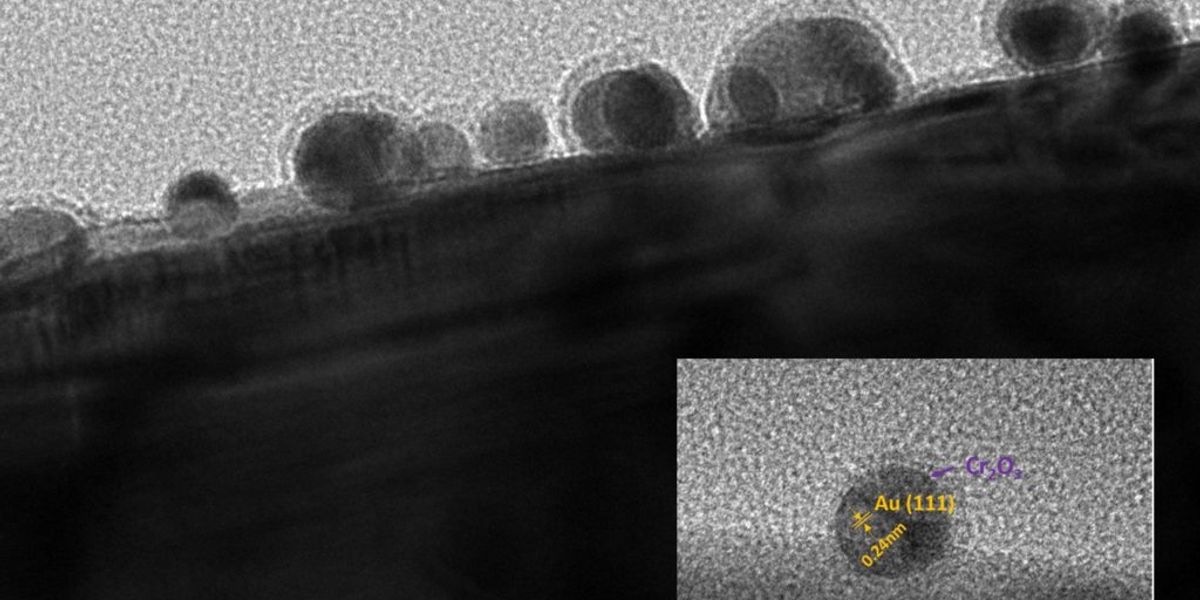 Transmission electron microscopy (TEM) image of a semiconductor nanowire composed of indium, gallium and nitrogen, and coated with the gold and chromium oxide nanoparticles. As shown in the high resolution TEM image inset, the gold is surrounded by a shell of chromium oxide. Credit: Roksana Rashid, McGill University.

Producing synthesis gas, a precursor of a variety of fuels and chemicals, no longer requires natural gas, coal or biomass.

Solar-powered synthesis gas could recycle carbon dioxide into fuels and useful chemicals, an international team of researchers has shown.

“If we can generate syngas from carbon dioxide utilizing only solar energy, we can use this as a precursor for methanol and other chemicals and fuels. This will significantly reduce overall CO2 emissions,” said Zetian Mi, professor of electrical and computer engineering at the University of Michigan, who led the study published in the Proceedings of the National Academy of Science.

Composed mainly of hydrogen and carbon monoxide with a little methane, syngas is commonly derived from fossil fuels with the help of electricity. In addition, toxic chemicals are often added to make the process more efficient. 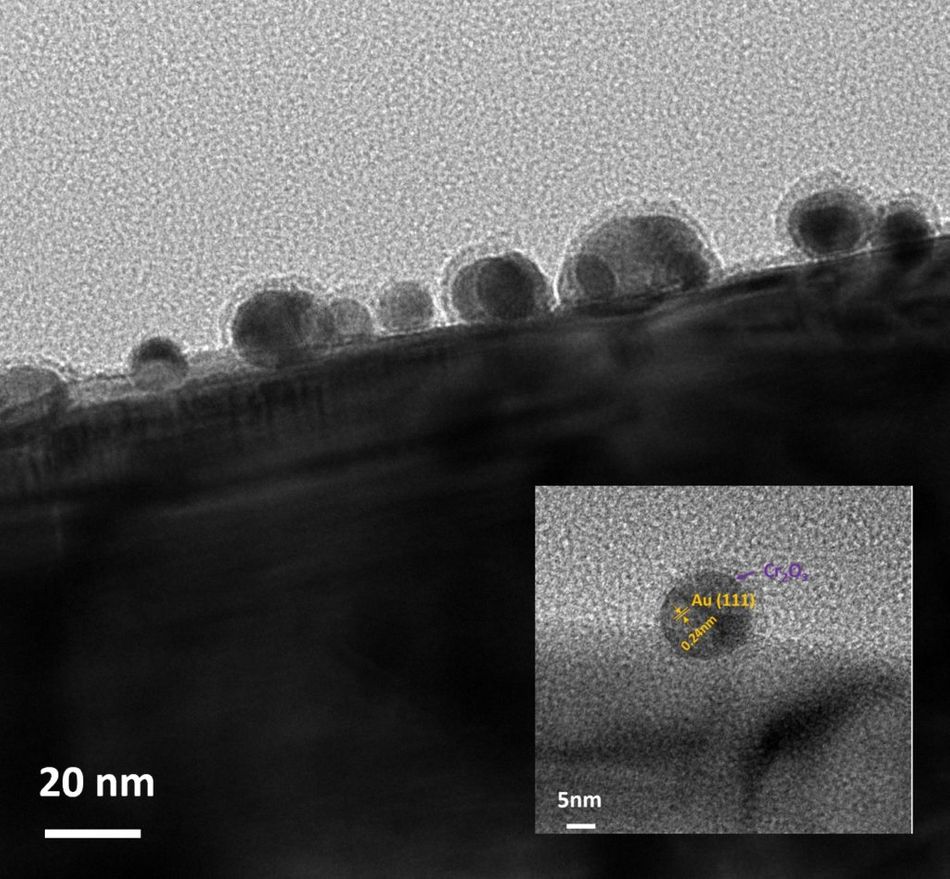 Transmission electron microscopy (TEM) image of a semiconductor nanowire composed of indium, gallium and nitrogen, and coated with the gold and chromium oxide nanoparticles. As shown in the high resolution TEM image inset, the gold is surrounded by a shell of chromium oxide. Credit: Roksana Rashid, McGill University.

“Our new process is actually pretty simple, but it’s exciting because it’s not toxic, it’s sustainable and it’s very cost effective,” said Roksana Rashid, first author of the study, who performed the experiments as a doctoral student in electrical and computer engineering at McGill University in Canada.

To create a process that uses only solar energy, Mi’s group overcame the difficulty of splitting carbon dioxide molecules, which are among the most stable in the universe. For this, they peppered a forest of semiconductor nanowires with nanoparticles. Those nanoparticles, made of gold coated with chromium oxide, attracted the carbon dioxide molecules and bent them, weakening the bonds between the carbon and oxygen.

The gallium nitride nanowires used the light energy to free electrons and the positively charged spaces they leave behind, known as holes. The holes split water molecules, separating the protons (hydrogen) from the oxygen. Then, at the metal catalysts, the electrons split the carbon dioxide, producing carbon monoxide and sometimes drawing in the free hydrogen to make methane. Processes are under development to separate the oxygen from the other gases. 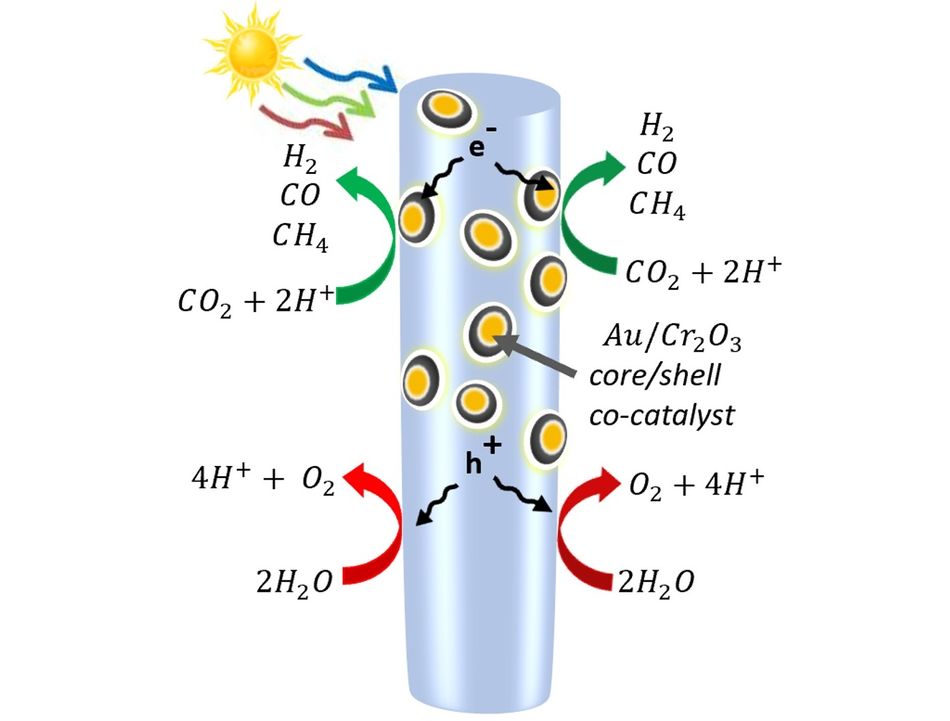 Diagram: Semiconductor nanowires made of indium, gallium and nitrogen—decorated with gold and chromium oxide nanoparticles. When the light hits the nanowire, it frees up electrons and the positively charged “holes” that electrons leave behind. On the nanowire itself, the holes oxidize water into proton and oxygen. Meanwhile, some electrons are drawn into the metal nanoparticles, where they break apart carbon dioxide. The molecules recombine into the carbon monoxide, hydrogen and methane molecules that make up syngas. Credit: Roksana Rashid, McGill University.

“Our technology sheds light on how to build distributed syngas production from air, water and sunlight,” said Baowen Zhou, co-corresponding author of the study with Mi and a former postdoctoral research fellow in Mi’s lab at McGill University and U-M.

“What is surprising is the synergy between gold and chromium oxide to make the CO2 reduction to syngas efficient and tunable. That was not possible with a single metal catalyst,” Mi said. “This opens up many exciting opportunities that were not previously considered.”

Mi’s tunable syngas setup uses standard industrial manufacturing processes, and is scalable. While Rashid used distilled water in this experiment, seawater and other electrolyte solutions are also expected to work, and Mi has used them in related water-splitting studies.

“The semiconductor we use as the light absorber is based on silicon and gallium nitride, which are the most commonly produced semiconductors, and we use very little material for the gallium nitride. Each nanowire is about one micrometer in thickness,” Mi said.

Mi’s next goal is to increase the efficiency of the device, which currently stands at 0.89%. When 10% of the light energy is converted to chemical energy, he hopes that the technology could see the technology be adopted for renewable energy, similar to solar cells.

The project was supported through the Emission Reduction Alberta ERA, based at McGill University in Canada, former home of Mi. The co-authors all have current or former ties to McGill. Rashid is currently a postdoctoral researcher in electrical and computer engineering at the University of Waterloo in Canada. Zhou is currently an associate professor of mechanical engineering at Shanghai Jiao Tong University.

A licensing agreement for intellectual property developed in this study is in the process of being negotiated in order to bring the technology to market and make a positive environmental impact. The two companies are NS Nanotech Inc. and NX Fuels Inc, both co-founded by Mi. The University of Michigan and Mi have a financial interest in these companies.

Australia's plans to produce hydrogen using fossil fuels carries significant risks and could create an industry that leads to an increase in greenhouse gas emissions, researchers from The Australian National University (ANU) warn.