At the end of October 2021, it will be time for German astronaut Matthias Maurer to travel to the International Space Station (ISS) on board a SpaceX Crew Dragon. His first ISS mission has been named 'Cosmic Kiss'. Thirty-six experiments developed in Germany have been planned for his mission. One of them is Wireless Compose 2 (WICO2), which has been designed and prepared by the German Aerospace Center (Deutsches Zentrum für Luft- und Raumfahrt; DLR) and its partners DSI Aerospace Technologie, Hohenstein Laboratories and Bielefeld University. This wireless communications network can receive sensor data and use the transit times of radio signals to determine the position of objects in the ISS. It can also be used as a platform for further experiments. The Ballistocardiography for Extraterrestrial Applications and long-Term missions (BEAT) experiment will use a T-shirt equipped with sensors to measure astronauts' ballistocardiographic data, including pulse and blood pressure. This provides a continuous overview of their vital signs. 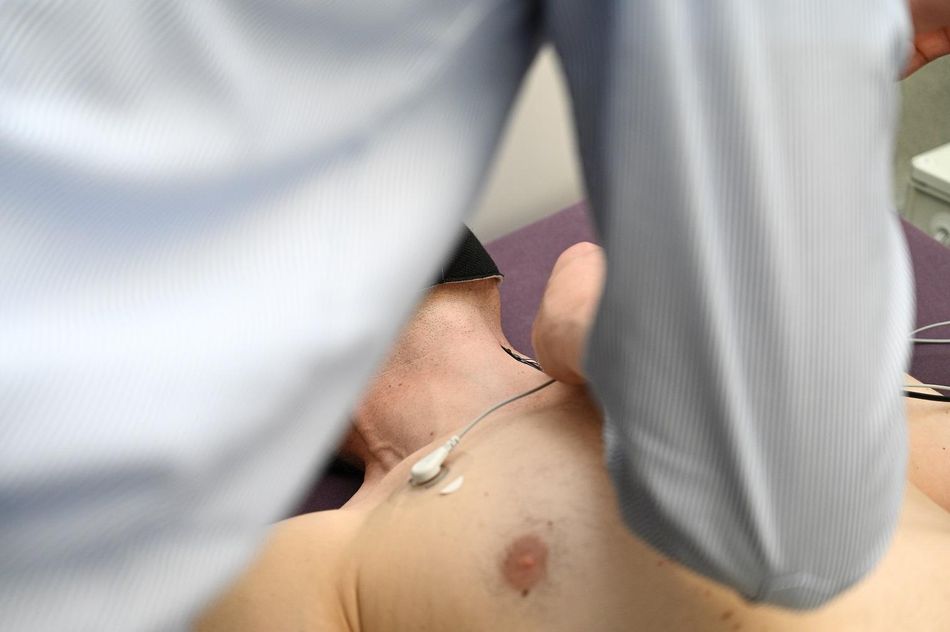 Matthias Maurer will be the first astronaut to wear the 'SmartTex' smart T-shirt on the ISS. Sensors are integrated into the T-shirt in the necessary places to measure the relevant physiological data. The astronaut can thus wear the sensors comfortably on their body. They acquire cardiovascular data such as relative blood pressure and details of the rate of contraction and the opening and closing times of the heart valves – information that is normally only accessible using sonography or computed tomography. This allows the impact of the space environment on the human cardiovascular system to be assessed and demonstrated.

In the summer of 2021, researchers calibrated the sensors for the SmartTex in the :envihab research facility at the DLR Institute of Aerospace Medicine in Cologne. It is well known that muscles deteriorate in microgravity conditions. "The heart is a muscle, too, so it will be interesting to see whether and how the heart changes under space conditions. That is why we will be measuring the ballistocardiographic data from Matthias Maurer before, during and after his stay on the ISS," explains Martin Drobczyk, Project Manager at the DLR Institute of Space Systems in Bremen. "This is particularly relevant for long-term crewed space missions to the Moon and Mars." In April 2022, Italian ESA astronaut Samantha Cristoforetti will fly to the ISS and also wear the T-shirt. "We are delighted that both a male and a female astronaut will be testing the SmartTex. We are particularly interested in whether there will be differences between the measurement data from male and female astronauts," adds Drobczyk. 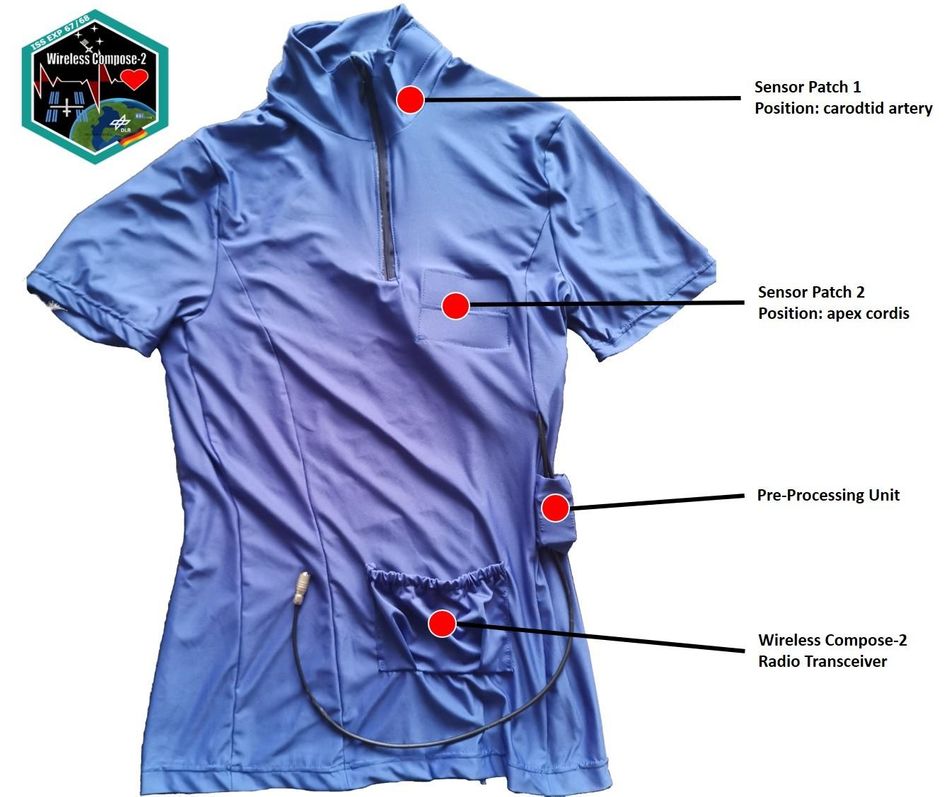 The company Hohenstein Laboratories developed and provided the SmartTex T-shirt. The ballistocardiography measurements are carried out in cooperation with space company DSI Aerospace Technologie GmbH, which also supplied the sensors. The experiment will be supervised by the Medical Faculty of Bielefeld University. The resulting data will be temporarily stored within the network and retrieved by the astronaut at regular intervals. These data packets will then be transferred to Earth via the ISS connection for evaluation by the DLR research team.

In the future, the SmartTex technology could be transferred to applications in the fields of fitness and telemedicine.

Wireless network on the ISS

Wireless Compose 2 (WICO2) is the continuation of the successful ISS experiment Wireless Compose, a wireless communications network for receiving sensor data efficiently and pinpointing the locations of objects within the ISS. The aim is to provide a flexible and adaptable wireless network infrastructure for conducting experiments, which has low power consumption and low weight. The WICO2 network hardware consists of five modules that together weigh just one kilogram. Each individual module is roughly the size of a small smartphone. They are scheduled to travel to the ISS on board the SpaceX CRS-24 supply flight, which is expected to launch in December 2021.

Communication within the network is based on ultra-broadband technology. This is particularly effective and less prone to interference in metallic, reflective environments such as the ISS. Another feature of the technology is that it can determine the transit times of the emitted signals, and thus measure distance. This makes it possible to determine the position of astronauts and objects to within 10 centimetres. 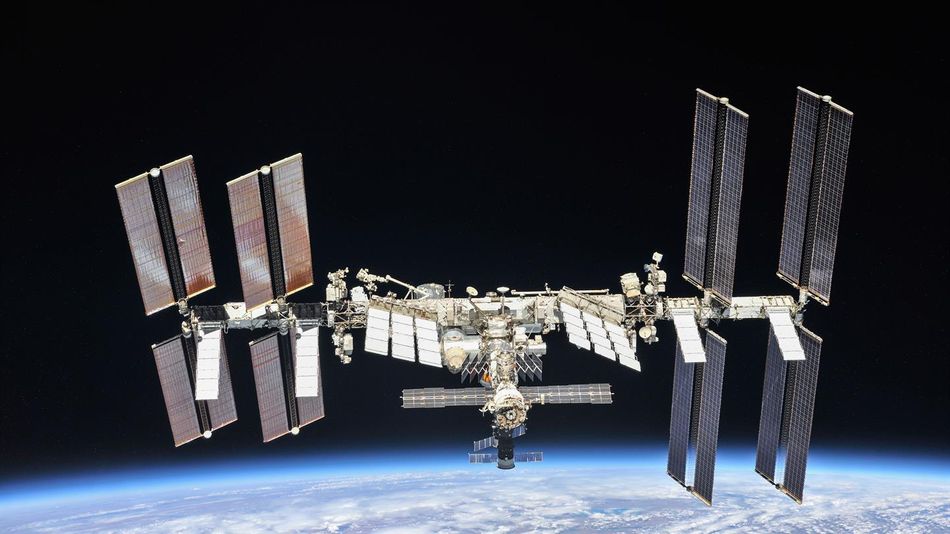 The network currently derives its electricity from batteries. In the future, it will generate its power from the light on the ISS itself through a process called energy harvesting. Christian Strowik from the DLR Institute of Space Systems is investigating which photovoltaic cells are most efficient at generating electricity from the artificial light on the ISS. "On the ISS, most of the lighting is provided by commercially available fluorescent tubes, the light spectra of which change with prolonged use. We are now looking to determine which photovoltaic cells are best suited for supplying our network with electricity." In addition to research on photovoltaic cells, the scientists also want to make the electronics more efficient across the entire network. "As soon as we have identified suitable photovoltaic cells, we will look into storage options. We want to store the energy for as long as possible and make activity in the network dependent on the charge status of the storage," adds Strowik. This should help to further extend maintenance intervals.

Wireless Compose 2 is an updatable and adaptable network and thus offers an infrastructure for future scientific and bio-medical experiments.

A system made with two inexpensive sensors proves to be more accurate than smartwatches for measuring calories burned during activity.

Wireless solutions are already playing an increasingly essential role in the future of global healthcare, but more innovation is needed.