For quantum computers to surpass their classical counterparts in speed and capacity, their qubits—which are superconducting circuits that can exist in an infinite combination of binary states—need to be on the same wavelength. Achieving this, however, has come at the cost of size. Whereas the transistors used in classical computers have been shrunk down to nanometer scales, superconducting qubits these days are still measured in millimeters—one millimeter is one million nanometers.

Combine qubits together into larger and larger circuit chips, and you end up with, relatively speaking, a big physical footprint, which means quantum computers take up a lot of physical space. These are not yet devices we can carry in our backpacks or wear on our wrists.

To shrink qubits down while maintaining their performance, the field needs a new way to build the capacitors that store the energy that “powers” the qubits. In collaboration with Raytheon BBN Technologies, Wang Fong-Jen Professor James Hone’s lab at Columbia Engineering recently demonstrated a superconducting qubit capacitor built with 2D materials, rendering it a fraction of the size of previous capacitors.

To build qubit chips previously, engineers have had to use planar capacitors, which set the necessary charged plates side by side. Stacking those plates would save space, but the metals used in conventional parallel capacitors interfere with qubit information storage. In the current work, published on November 18 in NanoLetters, Hone’s PhD students Abhinandan Antony and Anjaly Rajendra sandwiched an insulating layer of boron nitride between two charged plates of superconducting niobium diselenide. These layers are each just a single atom thick and held together by van der Waals forces, the weak interaction between electrons. The team then combined their capacitors with aluminum circuits to create a chip containing two qubits with an area of 109 square micrometers and just 35 nanometers thick—that’s 1,000 times smaller than chips produced under conventional approaches.

When they cooled their qubit chip down to just above absolute zero, the qubits found the same wavelength. The team also observed key characteristics that showed that the two qubits were becoming entangled and acting as a single unit, a phenomenon known as quantum coherence; that would mean the qubit’s quantum state could be manipulated and read out via electrical pulses, said Hone. The coherence time was short—a little over one microsecond, compared to about 10 microseconds for a conventionally built coplanar capacitor, but this is only a first step in exploring the use of 2D materials in this area, he said. 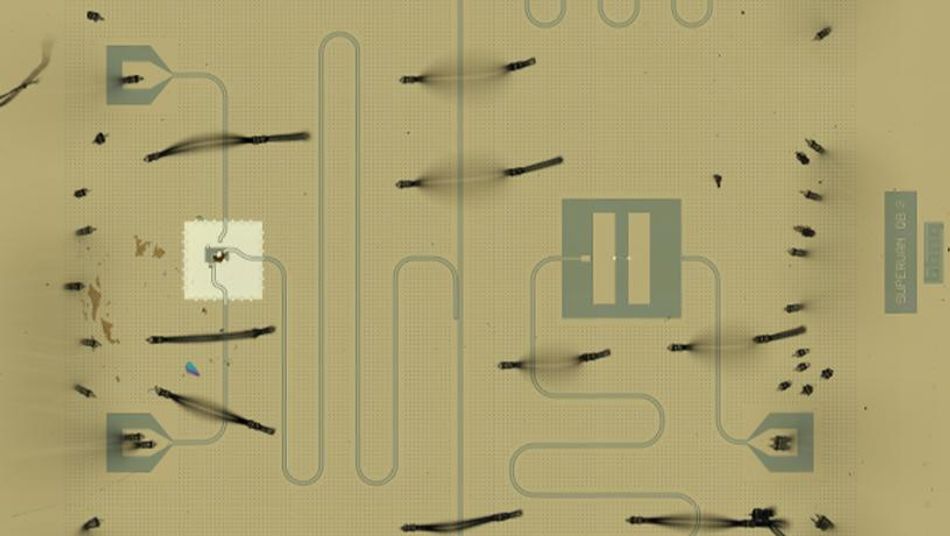 Separate work published on arXiv in August from researchers at MIT also took advantage of niobium diselenide and boron nitride to build parallel-plate capacitors for qubits. The devices studied by the MIT team showed even longer coherence times—up to 25 microseconds—indicating that there is still room to further improve performance.

From here, Hone and his team will continue refining their fabrication techniques and test other types of 2D materials to increase coherence times, which reflect how long the qubit is storing information. New device designs should be able to shrink things down even further, said Hone, by combining the elements into a single van der Waals stack or by deploying 2D materials for other parts of the circuit.

“We now know that 2D materials may hold the key to making quantum computers possible,” Hone said. “It is still very early days, but findings like these will spur researchers worldwide to consider novel applications of 2D materials. We hope to see a lot more work in this direction going forward.”

Science Communications Manager for the Quantum Initiative at Columbia University

"Magic-angle" trilayer graphene may be a rare, magnet-proof superconductor