Scientific, decoupled, and intelligent moulding are commonly used terms within the plastics industry to describe an injection moulding methodology that allows for consistent, repeatable parts to be efficiently produced in a system with many sources of variation. This guide covers the basic steps in setting up this process in order to create the most accurate, repeatable moulded parts for you.

An important first step is to determine a robust fill-speed setting that allows for inherent variations, which are seen both within polymers and injection moulding press performance, all while reducing the variation imposed on the polymer melt that fills the mould cavity. This will help ensure repeatable part and/or product performance-related to the polymer’s bulk properties.

As the material is being driven to flow, shear stress is imparted on the molecular chains. The shear stress begins to align the molecular chains in the direction of flow, thus allowing the chains to slip more easily past one another. As shear rate is increased, the easier the material will flow (viscosity drops). This is a behaviour seen with Non Newtonian fluids. The viscosity will continue to drop as the shear rate is increased until the molecular chains have reached full alignment. At the point of full alignment, the viscosity will remain constant with further increasing shear rate. This is known as the Upper Newtonian Plateau, as the material will now exhibit a more Newtonian fluid type of behaviour [see Viscosity Change vs. Shear Rate chart]. 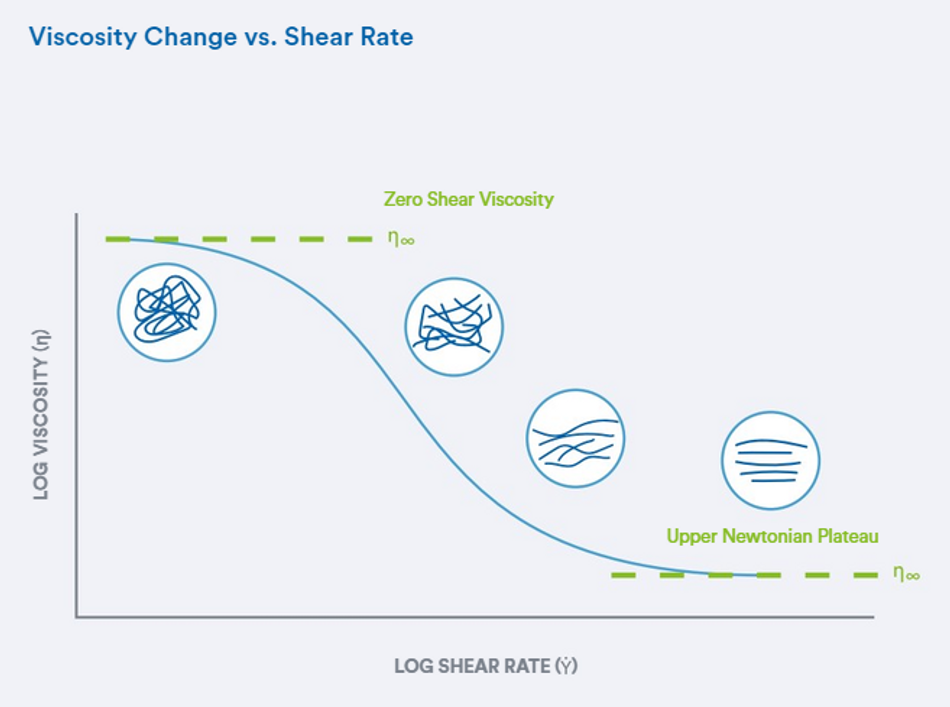 This chart shows viscosity change vs. shear rate. As shear rate is increased, the easier the material will flow (viscosity drops). At the point of full alignment, the viscosity will remain constant with further increasing shear rate. This is known as the Upper Newtonian Plateau.

Let’s move from background to application. The fill-speed determination process attempts to capture this shear-thinning behavior of the material as it flows through the mould. The in-mould rheology curve plots apparent viscosity vs. shear rate using readouts from the press – actual injection pressure and actual fill time [see Rheology Curve chart]. 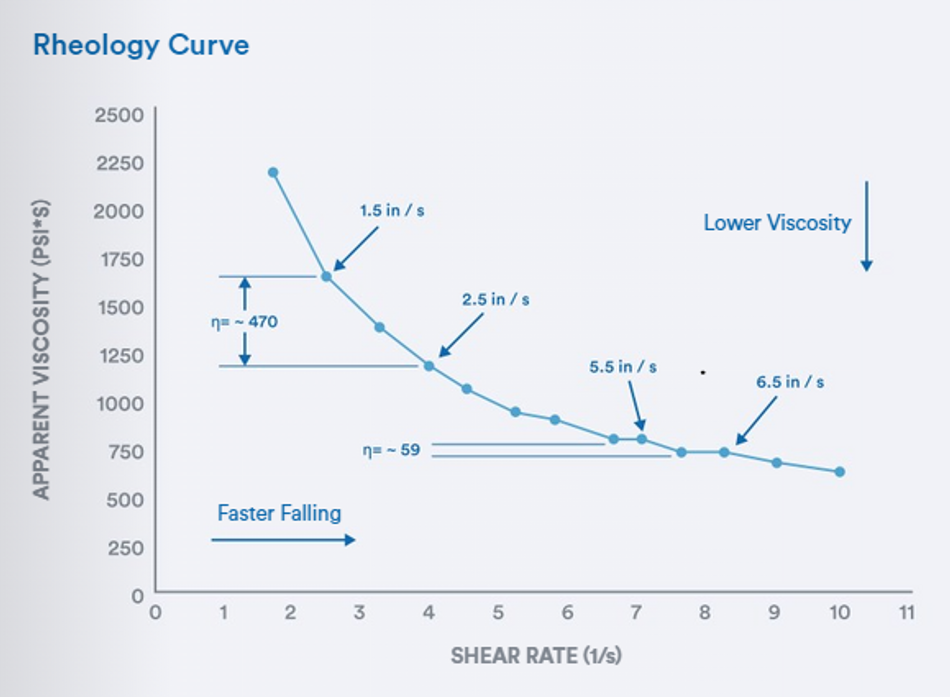 This example of a Rheology Curve Chart, which helps determine the optimum fill speed, shows that, as the shear rate is increased, the viscosity is reduced.

As seen in the Rheology Curve chart, as the shear rate is increased, the viscosity is reduced. At higher shear rates, the viscosity begins to level off. Choosing a fill speed that results in a shear rate in this plateaued region allows for material differences from lot to lot. Additionally, at this fill speed, inconsistencies in the machine stroke speed/response will have a negligible effect on the viscosity of the material that is flowing into the mould cavity. This results in manufactured parts having more uniform molecular/filler orientation, heat history, and pressurisation from shot to shot.

Looking at the process for determining a robust fill-speed setting also allows for the moulding process to use the shear-thinning behaviour of polymers to fill out smaller features, more accurately replicate mould geometry, improve weld line strength, and minimise potential for flow front hesitation. Be cautious, though: Don’t choose a fill speed that is too fast, resulting in very high shear rates. Shear rates that are too high can begin to degrade the polymer. The molecular chains can begin to break down, resulting in lower molecular weight. Lower molecular weight chains result in mechanical properties of the material being altered. This can lead to premature part failure. High shear rates are especially damaging to filled materials. Glass-fiber is a very common reinforcement for plastic materials, and often has a shear rate limit well below that of the carrier material. When shear rates are too high, reinforcing fibers can be broken down, thus reducing their effectiveness.

Next up is establishing a hold pressure setting that will pack out a part sufficiently, while reducing the potential for overpacking. A well-packed part will exhibit minimal volumetric shrinkage that would otherwise lead to sinks, voids, warpage, and so on while not being overly stressed to a point that could lead to premature failures such as cracking, or cause issues in the moulding process such as flash or trouble ejecting from the mould.

When plastic melt enters the mould cavity, it is at a lower density than when the polymer is solidified. As the plastic cools, the free volume between the molecular chains reduces. The illustration on page 5. highlights the state changes that occur with amorphous, semi crystalline, and liquid-crystal polymers.

A deeper look at some reasons for choosing plastic over metal including weight, finishes, strength, longevity, recyclability, cost.