From Lake Pontchartrain to the Texas border, Louisiana has lost enough wetlands since the mid-1950s to cover the entire state of Rhode Island. Using a first-of-its kind model, NASA-funded researchers quantified those wetlands losses at nearly 21 square miles (54 square kilometers) per year since the early 1980s.

In the new study, scientists used the NASA/USGS Landsat satellite record to track shoreline changes across Louisiana from 1984 to 2020. Some of those wetlands were submerged by rising seas; others were disrupted by oil and gas infrastructure and hurricanes. But the primary driver of losses was coastal and river engineering, which can have positive or negative effects depending on how it is implemented.

Centimeter by centimeter, wetlands are built by the slow accumulation – accretion – of mineral sediment and organic material carried by rivers and streams. Accretion makes new soil and counters erosion, the sinking of land, and the rise of sea level.

Human intervention and engineering often hold back or divert the flow of sediments that naturally accrete to build and replenish wetlands. For instance, reinforced levees and thousands of miles of canals and excavated banks have isolated many wetlands from the Mississippi River and the network of streams that course through its delta like veins and capillaries. In a few cases, engineering projects have added sediment to delta areas and built new land. 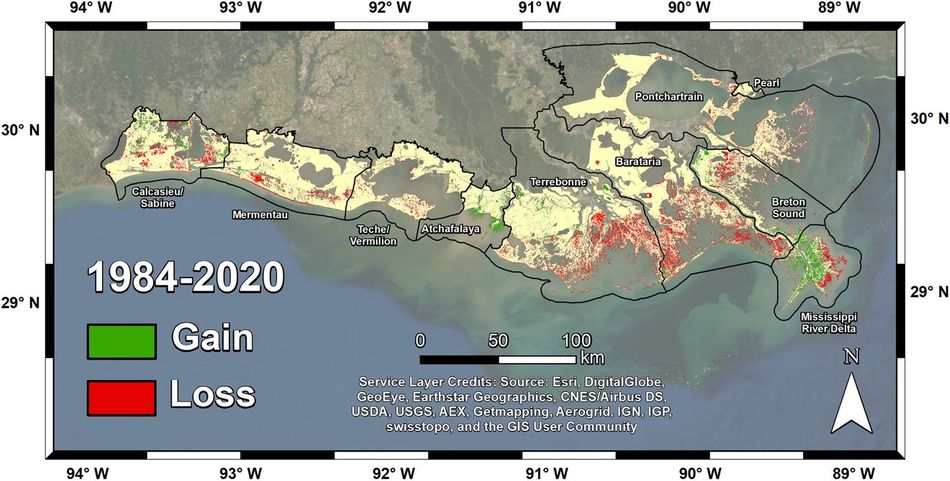 The researchers mapped land change in coastal Louisiana from 1984 to 2020. Basins that failed to build new soil, such as Terrebonne and Barataria, experienced the most land loss – more than 180 square miles (466 square kilometers). Credit: Jensen et al. Journal of Geophysical Research: Biogeosciences

By analyzing Landsat imagery with tools from cloud computing, the researchers developed a remote sensing model that focused on accretion or the lack of it. Basins that failed to build new soil, such as Terrebonne and Barataria, experienced the most land loss over the study period – more than 180 square miles (466 square kilometers). Other areas gained ground, including 33.6 square miles (87 square kilometers) of new land in the Atchafalaya Basin and 43 square miles (112 square kilometers) in the area known as the “Bird’s Foot Delta” at the mouth of the Mississippi River.

“The Louisiana coastal system is highly engineered,” said Daniel Jensen, lead author and postdoctoral researcher at NASA’s Jet Propulsion Laboratory in Southern California. “But the fact that ground has been gained in some places indicates that, with enough restoration efforts to reintroduce fresh water supply and sediment, we could see some wetland recovery in the future.”

Understanding wetland dieback and recovery is critically important because the Mississippi River Delta, like many of the world’s deltas, drives local and national economies through farming, fisheries, tourism, and shipping. “For the 350 million people who live and farm on deltas around the world, coastal wetlands provide a key link in the food chain,” said JPL’s Marc Simard, principal investigator of NASA’s Delta-X mission and co-author of the paper. 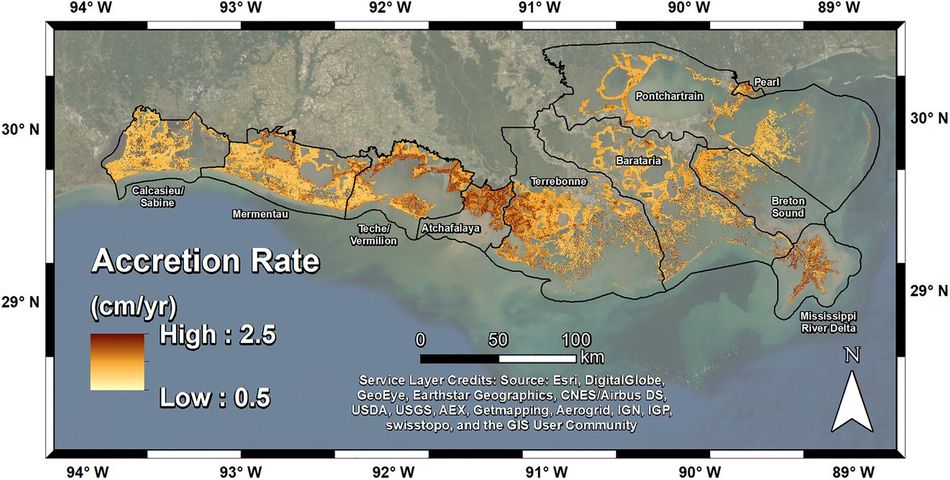 In several airborne and field campaigns since 2016, the Delta-X research team has been studying the Mississippi River Delta, the seventh largest on Earth, using airborne sensing and field measurements of water, vegetation, and sediment changes in the face of rising sea level. The Landsat analysis builds on this airborne mission. Delta-X is part of NASA’s Earth Venture Suborbital (EVS) program, managed at NASA’s Langley Research Center in Hampton, Virginia.

The new model by Jensen and colleagues is the first to directly estimate soil accretion rates in coastal wetlands using satellite data. Working with ground-based accretion records from Louisiana’s Coastwide Reference Monitoring System, the scientists were able to estimate amounts of mineral sediment from water pixels in the Landsat imagery and organic material from the land pixels.

The researchers said their approach could be applied beyond Louisiana because wetland loss and resiliency is a global phenomenon. From the Great Lakes to the Nile Delta, the Amazon to Siberia, wetlands are found on every continent except Antarctica. And they are declining in most places. Wetlands were recently called some of the “most vulnerable, most threatened, most valuable, and most diverse” ecosystems on the planet, according to an international analysis co-authored by NASA researchers.

Keeping a Steady Eye on Sea Level Change From Space