Particle robots are composed of loosely coupled components, or particles, that lack an individual identity or addressable position. They are capable of only a simple motion—expansion and contraction. However, when a group of particles is coordinated to move as a collective, interesting behavior is observed. Even in amorphous configurations, particle robots exploit statistical mechanics phenomena to produce locomotion. Robotic Particles Photo Credit: Shuguang Li/Columbia Engineering

The concept of “gray goo,” a robot comprised of billions of nanoparticles, has fascinated science fiction fans for decades. But most researchers have dismissed it as just a wild theory.

Current robots are usually self-contained entities made of interdependent subcomponents, each with a specific function. If one part fails, the robot stops working. In robotic swarms, each robot is an independently functioning machine.

In a new study published today in Nature, researchers at Columbia Engineering and MIT Computer Science & Artificial Intelligence Lab (CSAIL) demonstrate for the first time a way to make a robot composed of many loosely coupled components, or “particles.” Unlike swarm or modular robots, each component is simple and has no individual address or identity. In their system, which the researchers call a “particle robot,” each particle can perform only uniform volumetric oscillations (slightly expanding and contracting), but cannot move independently.

The team, led by Hod Lipson, professor of mechanical engineering at Columbia Engineering, and CSAIL Director Daniela Rus, discovered that when they grouped thousands of these particles together in a “sticky” cluster and made them oscillate in reaction to a light source, the entire particle robot slowly began to move forward, towards the light. 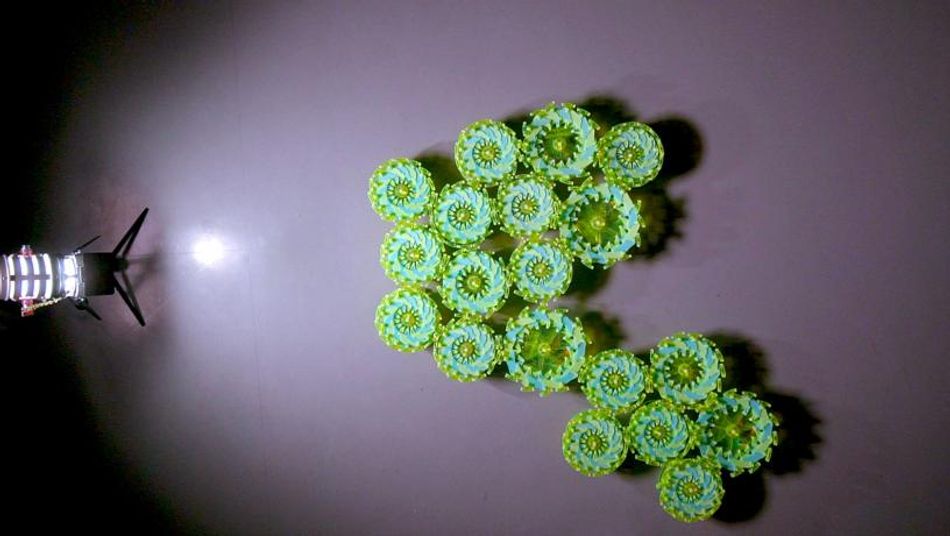 The particle motion can be phase-modulated by an environmental stimulus, such as a light source. Here, we show a particle robot in which each component measures its light intensity, broadcasts its value to the group, and receives the intensity values of its neighbors to determine its phase delay. This produces undulating motion, with net movement towards the light source. Light Source Photo Credit: Richa Batra, Jane Nisselson, Kyle Parsons/Columbia Engineering

“You can think of our new robot as the proverbial ‘Gray Goo,’” says Lipson. “Our robot has no single point of failure and no centralized control. It’s still fairly primitive, but now we know that this fundamental robot paradigm is actually possible. We think it may even explain how groups of cells can move together, even though individual cells cannot.”

Researchers have been building autonomous robots for more than a century, but these have been non-biological machines that cannot grow, heal, or recover from damage. The Columbia Engineering/MIT team has been focused on developing robust, scalable robots that can function even when individual components fail.

“We’ve been trying to fundamentally rethink our approach to robotics, to discover if there is a way to make robots differently,” says Lipson, who directs the Creative Machines lab. “Not just make a robot look like a biological creature but actually construct it like a biological system, to create something that is vast in complexity and abilities yet composed of fundamentally simple parts.”

Rus, who is also the Andrew (1956) and Erna Viterbi Professor of Electrical Engineering and Computer Science at MIT, adds, “All creatures in nature are made of cells that combine in different ways to make organisms. In developing particle robots, the question we ask is, can we have robotic cells that can be composed in different ways to make different robots? The robot could have the best shape required by the task—a snake to crawl through a tunnel or a three-handed machine for a factory floor. We could even give these particle robots the ability to make themselves. Suppose, for example, that a robot needs a screw driver from the table—the screw driver is too far to reach. What if the robot could reshuffle its cells to grow an extra long arm? As its goals change, its body can change too.”

The team, working with Chuck Hoberman at Harvard’s Wyss Institute and other researchers at Cornell, used many identical components, or particles, that could perform a simple motion like expansion and contraction. In simulations, they demonstrated robots comprising 100,000 particles. Experimentally, they demonstrated a system comprising two dozen particles.

“The particles closer to the light source experience brighter light and thus start their cycle earlier,” explains Shuguang Li, co-first author of the paper who conducted the physical experiments. Li, who was a postdoctoral fellow in Lipson's former lab at Cornell and is currently a postdoc with Rus at CSAIL, continues, “That movement creates a sort of wave throughout the cluster, from the ones closer to the light to the ones further away, and that wave makes the entire cluster move towards the light. The movement toward light creates a global motion, even though the individual particles cannot move independently.”

Modeling this behavior in simulations, they explored obstacle avoidance and object transport at greater scales, with hundreds and thousands of particles. They were also able to demonstrate the resilience of their particle robot paradigm both to noisy components and to individual failure.

“We found that our particle robots maintained approximately half of their fully functioning speed even when 20 percent of the particles are dead,” says Richa Batra, co-first author of the paper and Lipson’s PhD student who led the simulation studies.

The team is already testing their system with a larger number of cm-scale particles. They are also exploring other forms of particle robots, such as vibrating microspheres.

“We think it will be possible one day to make these kinds of robots from millions of tiny particles, like microbeads that respond to sound or light or chemical gradient,” says Lipson. “Such robots could be used to do things like clean up areas or explore unknown terrains/structures.”

Justin Werfel is a senior research scientist at Harvard’s Wyss Institute for Biologically Inspired Engineering, where he works on topics in complex and emergent systems, including swarm robotics, termite behavior, engineered molecular nanosystems, and evolutionary theory.