Signs of the Heat Probe Shifting on Mars. Credit: NASA/JPL-Caltech

There is a new plan to support the German Aerospace Center (Deutsches Zentrum für Luft- und Raumfahrt; DLR) Mars ‘Mole’ that is part of NASA’s InSight mission. The Heat Flow and Physical Properties Package (HP3) Mole is a self-driving penetrator that has hammered itself into the Martian subsurface to a depth of approximately 30 centimetres. Since 28 February 2019, it has no longer been able to move deeper beneath the surface. Tests with the Mole on Mars and replicas of the instrument located at DLR in Germany and at NASA's Jet Propulsion Laboratory in Pasadena, California, have provided insights about the possible causes of this situation. It is likely that the Mole is experiencing insufficient friction from the surrounding soil under the lower gravity on Mars, and that small, slot-shaped cavities may have formed between the penetrator and the soil. The scientists and engineers working on the InSight mission are now planning to use the lander’s robotic arm to lift away the support structure situated above the Mole. With the support structure removed, the situation can be examined more closely, and it will become possible to assist the penetrator directly with the robotic arm as it hammers further into the subsurface. 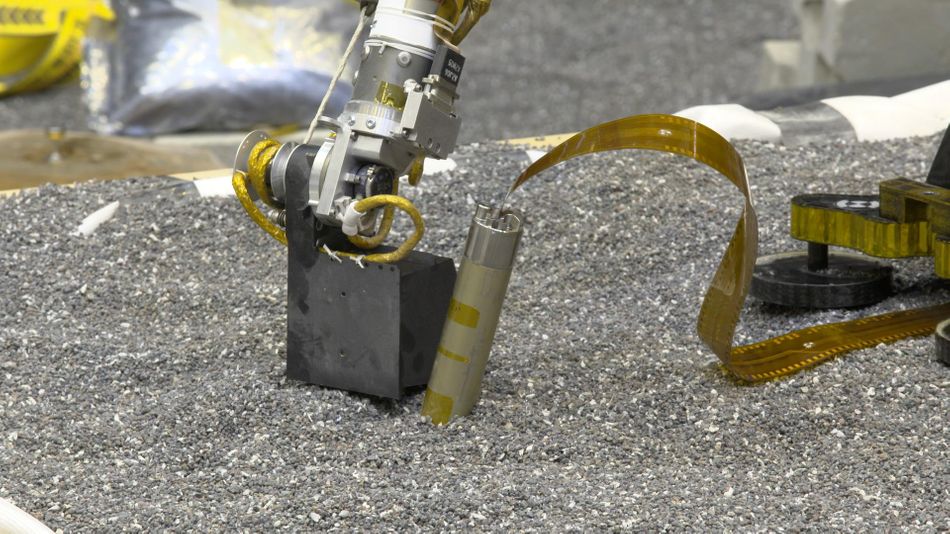 Testing How InSight's Arm Will Push on Mars. Credit: NASA/JPL-Caltech

The lifting process is expected to be commanded in several stages, starting at the end of June. First, the support structure will be gripped. In the course of a week, the arm will then lift the structure in three steps and acquire images. With this careful procedure, the engineers will ensure that the Mole, which is about three quarters into the surface, is not pulled out.

"We want to lift the support structure because we cannot visualise the Mole beneath the subsurface, and we therefore do not know what situation it is in," explains Tilman Spohn, Principal Investigator for the HP3 experiment at the DLR Institute of Planetary Research. "We are now rather sure that the insufficient grip from the soil around the Mole is a problem, because the friction caused by the surrounding regolith under the lower gravitational attraction on Mars is much weaker than we expected." Tests carried out at the DLR Institute of Space Systems in Bremen have confirmed that this can happen under certain circumstances. Lateral support and friction are important for the Mole, because the recoil from each hammer blow must be absorbed using resistance provided by contact with the surrounding soil.

There is also a possibility that the Mole has encountered a rock. The Mole was certainly designed in such a way that it is able to push small rocks out of its way. However, it could currently be trapped between a rock and the surrounding supporting structure. If this is the case, moving the support structure could allow it to bypass the obstacle and dig deeper. The team carefully chose a landing site that is flat and has as few rocks as possible on the surface. This usually means that there are fewer rocks in the subsurface as well. "We are confident that the probability of hitting a stone that is too large is only a few percent," continues Spohn. 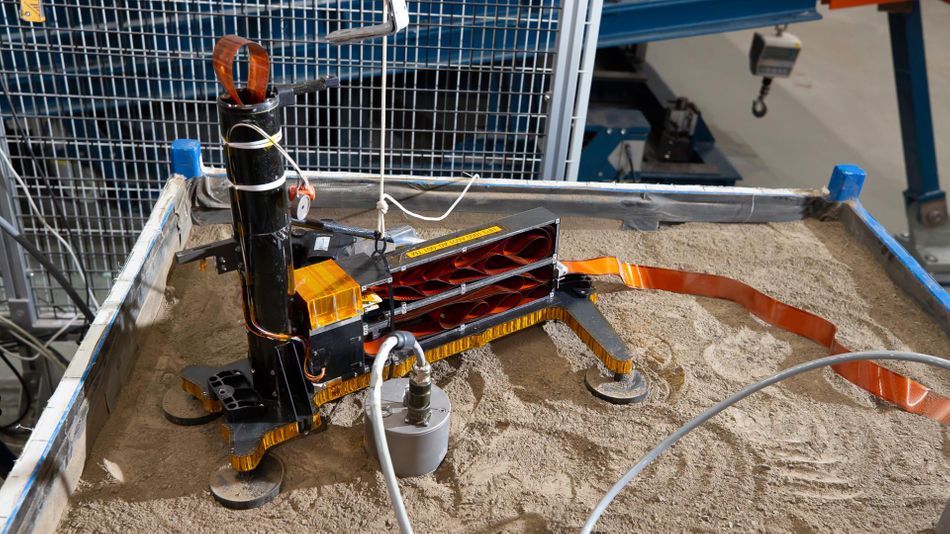 Once the support structure has been lifted, the researchers will decide on the best strategy to assist the Mole. "We plan to use the robotic arm to press on the soil close to the Mole. This additional load will increase the pressure on the penetrator and thus the friction on its outer surface," explains Spohn. "Our calculations at DLR suggest that we have to get close to the device. Immediately above the Mole, which is positioned at a small angle to the vertical with respect to the surface, and close to it, the effect is greatest. Without removing the support structure, we would be too far away, and the effect would be too small."

Gentle lifting of the support structure

The support structure of the HP3 experiment will be lifted step by step, as there are springs inside the support structure that may still be in contact with the rear of the Mole. "If that is the case, we want to be careful lifting the structure so that we do not accidentally pull the Mole out of the ground," says NASA engineer Troy Hudson. "If that happens, we will not be able to insert it back into its hole or move it elsewhere, since the arm has no way of picking up the Mole directly. So we will lift the support structure a little bit at a time, checking to make sure the Mole is not coming with it."
Moving the Mole would not help, even if the arm could grasp it. "We think that the issue is a lack of friction in the Martian regolith. So even if we could lift up the Mole, it would not matter where we put it – there would still be the same friction problem," adds Hudson.

The InSight mission is being carried out by NASA’s Jet Propulsion Laboratory (JPL) in Pasadena, California, on behalf of the agency’s Science Mission Directorate. InSight is part of NASA’s Discovery Program. DLR is contributing the Heat Flow and Physical Properties Package (HP3) experiment to the mission. The scientific leadership lies with the DLR Institute of Planetary Research, which was also in charge of developing and implementing the experiment in collaboration with the DLR Institutes of Space Systems, Optical Sensor Systems, Space Operations and Astronaut Training, Composite Structures and Adaptive Systems, and System Dynamics and Control, as well as the Institute of Robotics and Mechatronics. Participating industrial partners are Astronika and the CBK Space Research Centre, Magson GmbH and Sonaca SA, the Leibniz Institute of Photonic Technology (IPHT) as well as Astro- und Feinwerktechnik Adlershof GmbH. Scientific partners are the ÖAW Space Research Institute at the Austrian Academy of Sciences and the University of Kaiserslautern. The DLR Microgravity User Support Center (MUSC) in Cologne is responsible for HP³ operations. In addition, the DLR Space Administration, with funding from the German Federal Ministry for Economic Affairs and Energy, supported a contribution by the Max Planck Institute for Solar System Research to the French main instrument SEIS (Seismic Experiment for Interior Structure).

A flexible way to grab items with feeling

In a recent project, Professor Edward Adelson and Sandra Liu — a mechanical engineering PhD student at CSAIL — have developed a robotic gripper using novel “GelSight Fin Ray” fingers that, like the human hand, is supple enough to manipulate objects.