Researchers from MIT and Brigham and Women’s Hospital hope to reduce the risk to healthcare workers posed by Covid-19 by using robots to remotely measure patients’ vital signs. Credits:Credit: Spot image courtesy of the researchers, edited by MIT News

During the current coronavirus pandemic, one of the riskiest parts of a health care worker’s job is assessing people who have symptoms of Covid-19. Researchers from MIT and Brigham and Women’s Hospital hope to reduce that risk by using robots to remotely measure patients’ vital signs.

The robots, which are controlled by a handheld device, can also carry a tablet that allows doctors to ask patients about their symptoms without being in the same room.

“In robotics, one of our goals is to use automation and robotic technology to remove people from dangerous jobs,” says Henwei Huang, an MIT postdoc. “We thought it should be possible for us to use a robot to remove the health care worker from the risk of directly exposing themselves to the patient.”

Using four cameras mounted on a dog-like robot developed by Boston Dynamics, the researchers have shown that they can measure skin temperature, breathing rate, pulse rate, and blood oxygen saturation in healthy patients, from a distance of 2 meters. They are now making plans to test it in patients with Covid-19 symptoms.

“We are thrilled to have forged this industry-academia partnership in which scientists with engineering and robotics expertise worked with clinical teams at the hospital to bring sophisticated technologies to the bedside,” says Giovanni Traverso, an MIT assistant professor of mechanical engineering, a gastroenterologist at Brigham and Women’s Hospital, and the senior author of the study.

The researchers have posted a paper on their system on the preprint server techRxiv, and have submitted it to a peer-reviewed journal. Huang is one of the lead authors of the study, along with Peter Chai, an assistant professor of emergency medicine at Brigham and Women’s Hospital, and Claas Ehmke, a visiting scholar from ETH Zurich.

When Covid-19 cases began surging in Boston in March, many hospitals, including Brigham and Women’s, set up triage tents outside their emergency departments to evaluate people with Covid-19 symptoms. One major component of this initial evaluation is measuring vital signs, including body temperature.

The MIT and BWH researchers came up with the idea to use robotics to enable contactless monitoring of vital signs, to allow health care workers to minimize their exposure to potentially infectious patients. They decided to use existing computer vision technologies that can measure temperature, breathing rate, pulse, and blood oxygen saturation, and worked to make them mobile.

To achieve that, they used a robot known as Spot, which can walk on four legs, similarly to a dog. Health care workers can maneuver the robot to wherever patients are sitting, using a handheld controller. The researchers mounted four different cameras onto the robot — an infrared camera plus three monochrome cameras that filter different wavelengths of light. 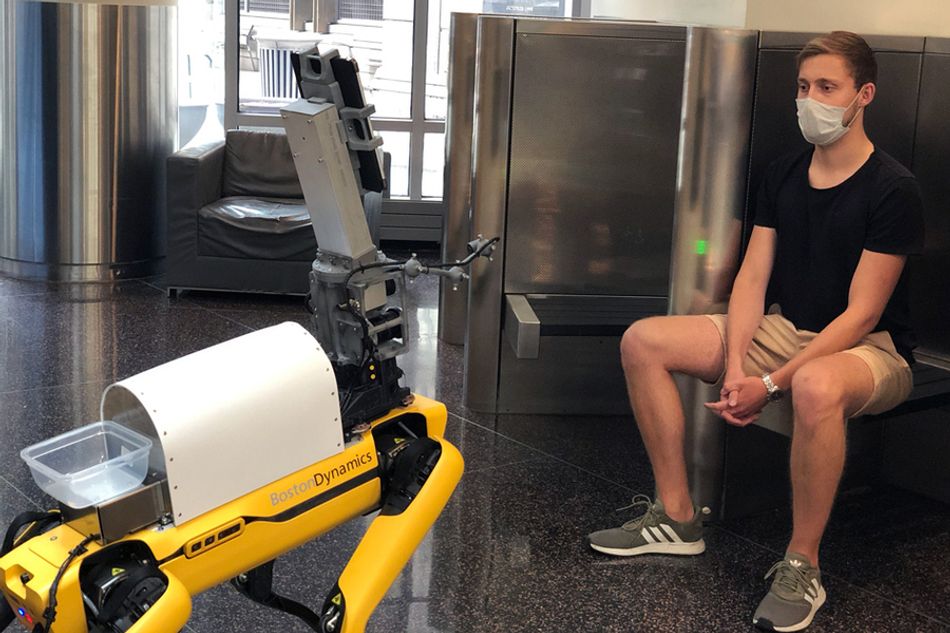 ﻿Using four cameras mounted on a dog-like robot developed by Boston Dynamics, the researchers have shown that they can measure skin temperature, breathing rate, pulse rate, and blood oxygen saturation in healthy patients, from a distance of 2 meters. Credits:Credit: Courtesy of the researchers

The three monochrome cameras each filter a different wavelength of light — 670, 810, and 880 nanometers. These wavelengths allow the researchers to measure the slight color changes that result when hemoglobin in blood cells binds to oxygen and flows through blood vessels. The researchers’ algorithm uses these measurements to calculate both pulse rate and blood oxygen saturation.

“We didn’t really develop new technology to do the measurements,” Huang says. “What we did is integrate them together very specifically for the Covid application, to analyze different vital signs at the same time.”

In this study, the researchers performed the measurements on healthy volunteers, and they are now making plans to test their robotic approach in people who are showing symptoms of Covid-19, in a hospital emergency department.

While in the near term, the researchers plan to focus on triage applications, in the longer term, they envision that the robots could be deployed in patients’ hospital rooms. This would allow the robots to continuously monitor patients and also allow doctors to check on them, via tablet, without having to enter the room. Both applications would require approval from the U.S. Food and Drug Administration.