The device created as part of the Russian Science Foundation project

Scientists have created a terahertz holographic spectrometer that they need for studying vortex beams of electromagnetic radiation at home. This research is a part of developing new efficient technologies for wireless data transmission.

Experimental physics obviously demands lots of expensive and complex devices. Moreover, if a project is at the frontline of science, it’s even harder to find a suitable device for it. Therefore, sometimes a research team has to design or update a device on its own.

Recently, ITMO University’s Laboratory of Digital and Display Holography faced a task of this kind. For several years now, the scientists at the lab have been studying ultra-wideband terahertz beams of electromagnetic radiation. It’s argued that these beams will help create groundbreakingly fast wireless connection channels that greatly surpass Wi-Fi by a lot.

“We work on creating an anti-jamming wireless data transmission as part of a Russian Science Foundation project,” says Nikolay Balbekin, a researcher. “It’s based on transmitting data with the help of beams of terahertz radiation with a certain structure.”

However, before attempting to transmit information with the help of terahertz radiation, the scientists need to check different types of beams in order to find the most suitable one. They need a special spectrometer to conduct experiments that would allow them to detect perturbation of the electromagnetic field in terahertz radiation. 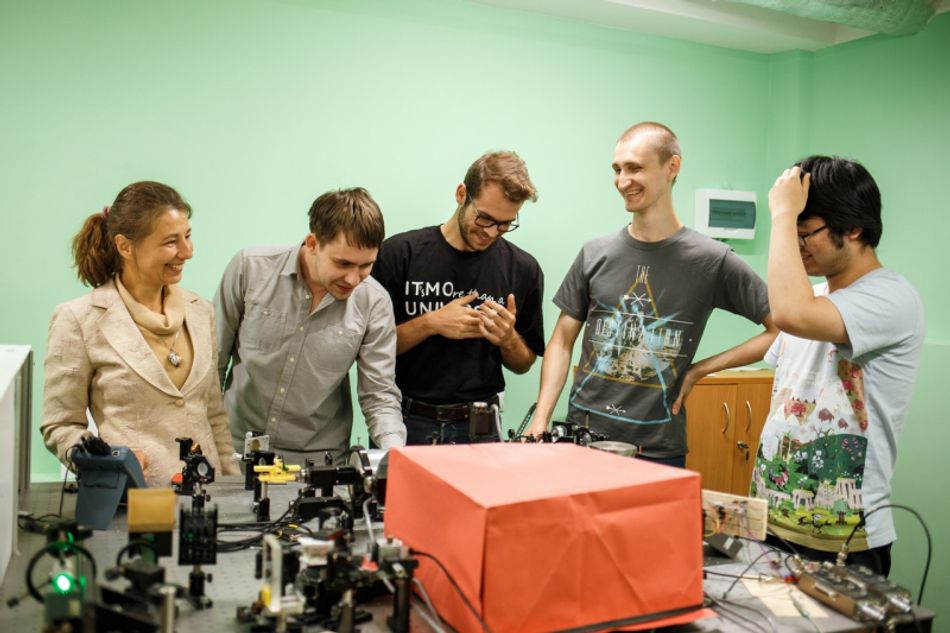 Yaroslav Grachev (second from the right) and his colleagues

“We plan to code information by means of spatial distribution inside a beam,” says Yaroslav Grachev, a researcher. “Inside the beams, a wavefront of radiation would curl up into a spiral. In order to decode the information, we need to detect this distribution. If interference changes the form of the spiral, the information will be distorted. That’s why we need to predict all the subsequences of beams’ change while it’s distributed in the air. With the help of a terahertz holographic spectrometer, we can detect the oscillations of the electromagnetic field by applying femtosecond impulses. It’s somewhat similar to taking pictures of the quickly happening change in the electromagnetic field.” 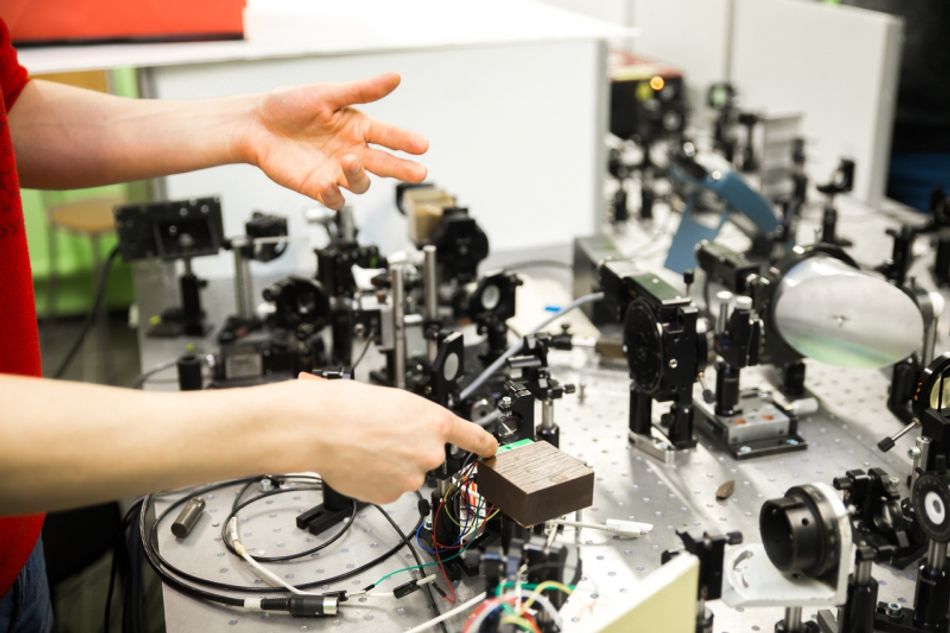 Yaroslav Grachev working on the device

At this point, a problem occurred: conventional technologies wouldn’t allow to “take pictures” needed for radiation beams analysis as fast as was necessary.

“Traditional technologies spend around 40 hours on time exposure,” explains Yaroslav Grachev. “We would need to scan the field step by step, moving the diaphragm [along the square of the measured beam]. The measurements we need to take for the Russian Science Foundation project would take years and wouldn’t necessarily have precise results. We needed to create a separate module for a detecting system that would allow us to move it along the device and take measurements quickly.”

Purchasing such an unconventional mechanical device from abroad would be quite expensive and time-demanding. The same reasons also made the scientists decide to create the device themselves instead of outsourcing.

An electro-optical crystal grown on ITMO University’s request was supposed to become the core of the new device and act as a detector. The crystal changes its optical features under the influence of terahertz radiation. These changes can be measured by a supershort laser impulse. The more powerful the terahertz signal is, the bigger change in laser radiation intensity will be detected by a video camera.

The device was supposed to be much more efficient with each measurement taking a reasonable amount of time instead of 40 hours. The construction was meant to include a number of unique parts printed on a 3D printer. The process of designing it took about a year. However, when the next phase of development was at hand, COVID-19 disrupted the plans, and scientists had to self-isolate. 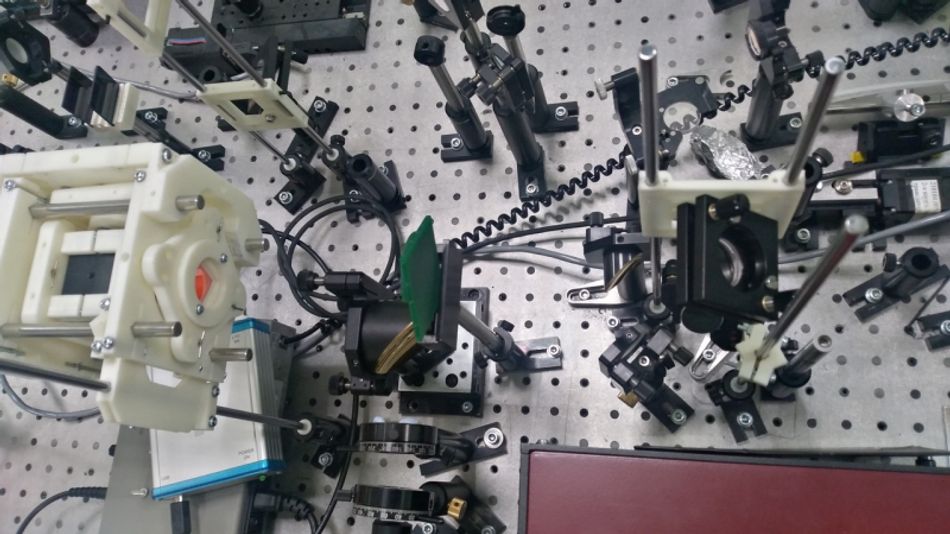 The device created as part of the Russian Science Foundation project

“A week before the self-isolation was announced, we had evaluated the situation and taken actions to provide the employees who could continue to work remotely with the best possible conditions. We moved the 3D printer and materials and our team members started to work from home,” says Nikolay Petrov, the head of the Laboratory of Digital and Display Holography.

Yaroslav Grachev and Vladimir Koklyushkin took key roles in implementing the design. The last drawings were discussed via Skype and the details were produced at home.

“I was responsible for 3D printing,” says Yaroslav Grachev. “The printer was moved to my place – I like working with it, too. Some metallic parts such as screws and guide strips had to be purchased. The rest we produced ourselves. Even though we had 10 years of experience in creating terahertz spectrometers and self-isolation was at hand, it took us a lot of non-stop work. We needed to design the concept, the adjustment mechanisms, the 3D models, and then print them, align the parts, put together a model of a spectrometer, fix the 3D printer (all the equipment that is constantly working tends to break at some point), upgrade the design of certain parts and produce them again.”

From a model to the experiment

One way or another, the device was completed. The next step was experimenting. It's necessary to leave the house at this phase, as you can’t bring a powerful femtosecond laser system to your apartment. The scientists had to take additional measures and wear masks and gloves that are necessary during the pandemic, as well as glasses and coats typically worn at the labs.

The experiments took a week and showed promising results. It was proven that the holographic spectrometer allows one to record the distribution of terahertz radiation on a 16x16x30mm square in 10 minutes. However, according to the creators, this number is not a limit.

Now the scientists need to conduct new experiments as part of their work on ultra-high-speed wireless data transmission. Ahead is the work on spatial filtering of a femtosecond laser beam to obtain a crystal clear image with high resolution in the terahertz range, as well as many other experiments related to the formation of terahertz vortex beams and the study of their free-space propagation – a topic the team had previously worked on.

The device can also be applied in other projects that demand measuring of terahertz radiation.

“I am for making 3D models of the parts that we used available for anyone, following the example of open-source hardware. This device can be efficiently used not only in our project, but also in experiments with terahertz technologies overall,” concludes Yaroslav Grachev.