A three-year grant from the National Science Foundation is funding research at Embry-Riddle to produce better, stronger materials for aircraft manufacturing.

Embry-Riddle Aeronautical University is leading an initiative to improve the performance and manufacturing capability of materials used to produce aircraft and other aerospace equipment, and including students as young as high school-level in the hands-on operation, thanks to a National Science Foundation (NSF) grant of $392,000.

The Eagle researchers who received the three-year grant — Aerospace Engineering associate professor Dr. Sirish Namilae and Dr. Marwan Al-Haik, professor and program coordinator for the Ph.D. in Aerospace Engineering program — are developing new methods to investigate and improve the manufacturing of composite materials, which make up more than 50% of the construction of newer aircraft, such as the Boeing 787.

According to Namilae, the research is pioneering because it explores how composite materials react while they are being cured, which is when they are susceptible to defects.

“The key innovation is we’re doing this during processing,” said Namilae, adding that the project involves a custom-built autoclave similar to ones used by manufacturers, but with viewports, or windows. The viewports allow the researchers to use an observation technique known as digital image correlation to watch deformations develop that can lead to defects in the final product. 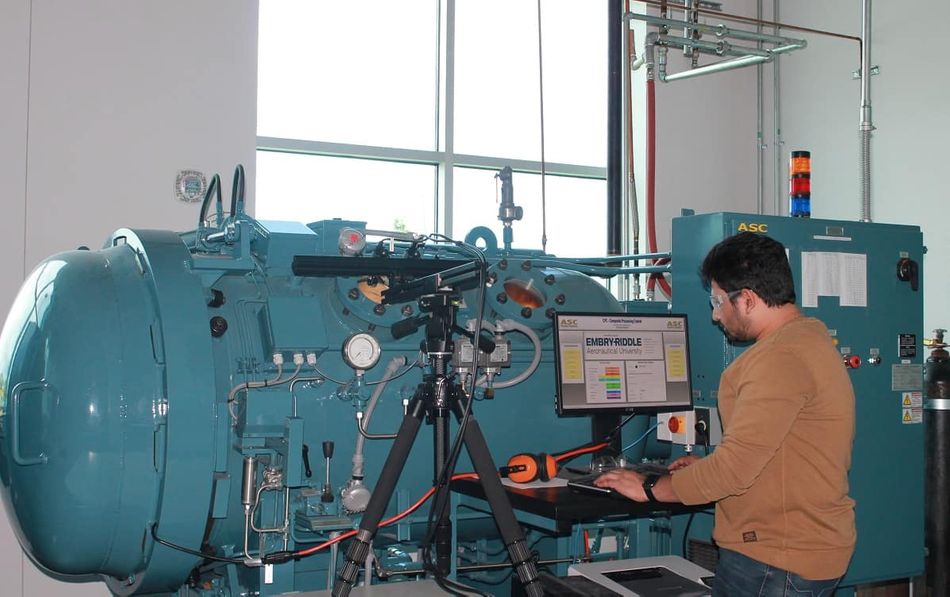 Composite defects can require redesigns, not only of aircraft but also of the civil infrastructure in which they are used. Wrinkles in composite materials, for example, Namilae said, can reduce a material’s strength by up to 30%.

Once the researchers have perfected in situ diagnostic techniques for manufacturing composite materials, they will experiment with using nanoscale components such as zinc oxide (ZnO) nanowires between the composite layers.

The ZnO nanowires strengthen the interface between the carbon fiber laminates — which is the weakest zone in structural composites — through a mechanism identical to Velcro. Basically, the ZnO nanowires will mechanically interlock with the adjacent carbon fibers, providing more resistance against mechanical loads. In addition, ZnO can convert mechanical deformations into electrical energy, which allows the developed composites to have added functionalities such as sensors that monitor their structural health.

The research will involve Embry-Riddle graduate students, undergraduates and even interns from local high schools, who will be paired with the graduate students. Studies have shown that exposing younger students to hands-on lab work can draw them into STEM fields, Namilae said.