An international team of researchers, led by Huanyu “Larry” Cheng, Dorothy Quiggle Career Development Professor in the Penn State Department of Engineering Science and Mechanics, has developed a stretchable antenna and rectenna system that harvests energy from radio waves in the ambient environment to power wearable devices. Image: Provided by Larry Cheng

From microwave ovens to Wi-Fi connections, the radio waves that permeate the environment are not just signals of energy consumed but are also sources of energy themselves. An international team of researchers, led by Huanyu “Larry” Cheng, Dorothy Quiggle Career Development Professor in the Penn State Department of Engineering Science and Mechanics, has developed a way to harvest energy from radio waves to power wearable devices.

The researchers recently published their method in Materials Today Physics. 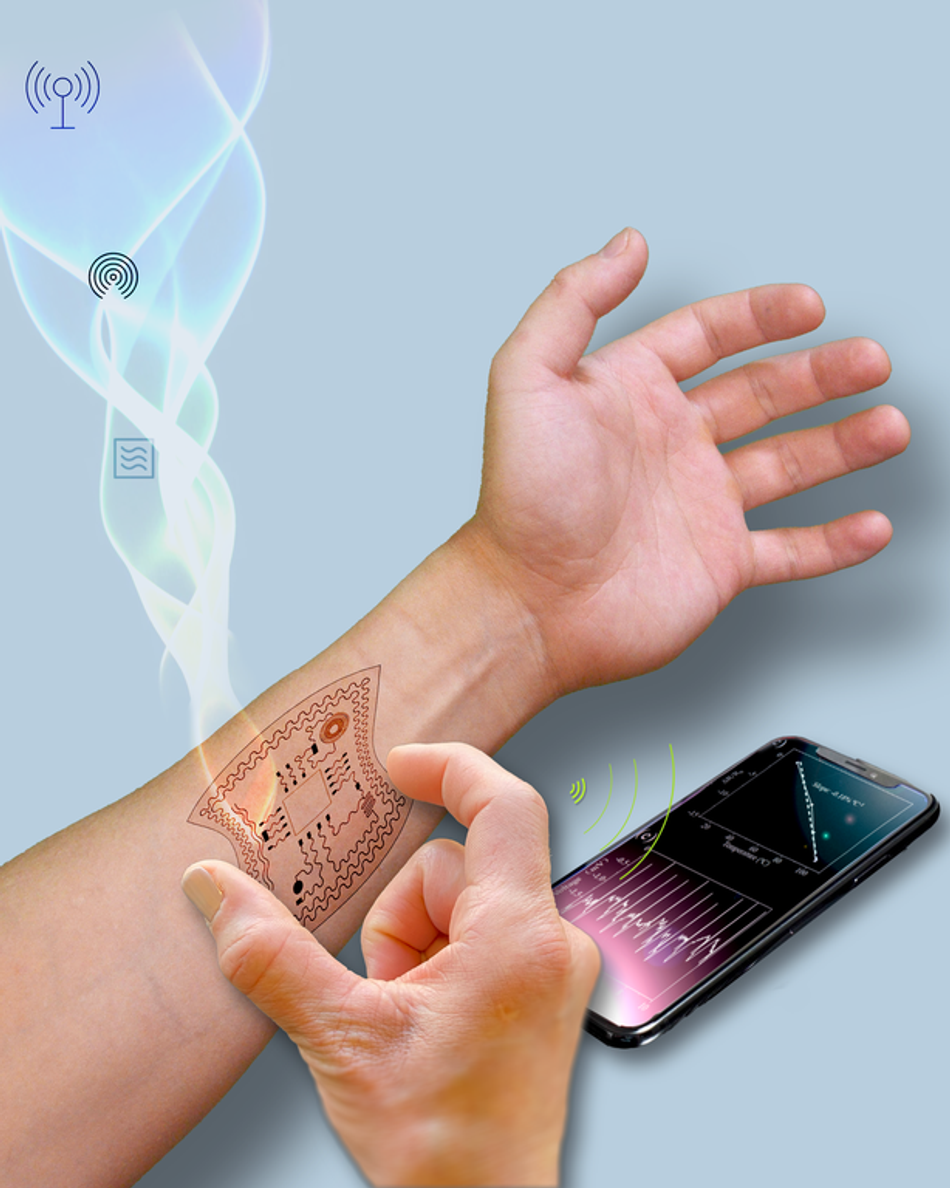 An international team of researchers, led by Huanyu “Larry” Cheng, Dorothy Quiggle Career Development Professor in the Penn State Department of Engineering Science and Mechanics, has developed a stretchable antenna and rectenna system that harvests energy from radio waves in the ambient environment to power wearable devices. Image: Provided by Larry Cheng

“We don’t want to replace any of these current power sources,” Cheng said. “We are trying to provide additional, consistent energy.”

The researchers developed a stretchable wideband dipole antenna system capable of wirelessly transmitting data that is collected from health-monitoring sensors. The system consists of two stretchable metal antennas integrated onto conductive graphene material with a metal coating. The wideband design of the system allows it to retain its frequency functions even when stretched, bent and twisted. This system is then connected to a stretchable rectifying circuit, creating a rectified antenna, or "rectenna,” capable of converting energy from electromagnetic waves into electricity. This electricity that can be used to power wireless devices or to charge energy storage devices, such as batteries and supercapacitors.

This rectenna can convert radio, or electromagnetic, waves from the ambient environment into energy to power the sensing modules on the device, which track temperature, hydration and pulse oxygen level. Compared to other sources, less energy is produced, but the system can generate power continuously — a significant advantage, according to Cheng.

“We are utilizing the energy that already surrounds us — radio waves are everywhere, all the time,” Cheng said. “If we don’t use this energy found in the ambient environment, it is simply wasted. We can harvest this energy and rectify it into power.”

Cheng said that this technology is a building block for him and his team. Combining it with their novel wireless transmissible data device will provide a critical component that will work with the team’s existing sensor modules.

“Our next steps will be exploring miniaturized versions of these circuits and working on developing the stretchability of the rectifier,” Cheng said. “This is a platform where we can easily combine and apply this technology with other modules that we have created in the past. It is easily extended or adapted for other applications, and we plan to explore those opportunities.”

There’s a reason Penn State consistently ranks among the top one percent of the world’s universities. Across 24 campuses, our 100,000 students and 17,000 faculty and staff know the real measure of success goes beyond the classroom—it’s the positive impact made on communities across the world. Our i... learn more

Signs of burnout can be detected in sweat

EPFL engineers, working in association with startup Xsensio, have developed a wearable sensing chip that can measure the concentration of cortisol – the stress hormone – in human sweat.

The design could lead to conformable wearable monitors to track skin cancer and other conditions.