A demonstration of the ink's fluorescence in UV light. Photo by Dmitry Grigoriev, ITMO.NEWS

Scientists from ITMO University, Bauman Moscow State Technical University, and the University of Toronto have developed a gel ink that emits light when exposed to monochromatic radiation of various wavelengths. This makes it possible to create complex images when applying tags to products – the scientists believe that the level of anti-counterfeiting protection offered by their invention is much higher than that of the existing counterparts. The research received support from a Russian Science Foundation and the Ministry of Science and Higher Education grant.

The invention is based on nanocolloidal systems produced by means of ionic gelation of nanoparticles with different charge. They contain poly(ethyl methacrylate)-based polymer particles with different charges, which gives the material not just plasticity but also the ability to self-restore. The gels produced in such a way can be used for 2D imagery as well as in multilayer 3D printing, which offers many prospects for their use: from the creation of functional biological materials and films to the printing of optically active structures. Among the applications of the latter is anti-counterfeiting protection.

The tags developed at ITMO University can be applied not only on even surfaces, but also on those with complex geometry or morphology. It’s also worth mentioning that this method is not just eco-friendly and affordable, but also safe for both customers and products. It can be used to tag clothes, as it doesn’t damage fabrics and the tags can be easily removed with organic solvents. It can also be used in the food industry: the tags don’t percolate even through thin membranes, which makes it possible to use them in food packaging. 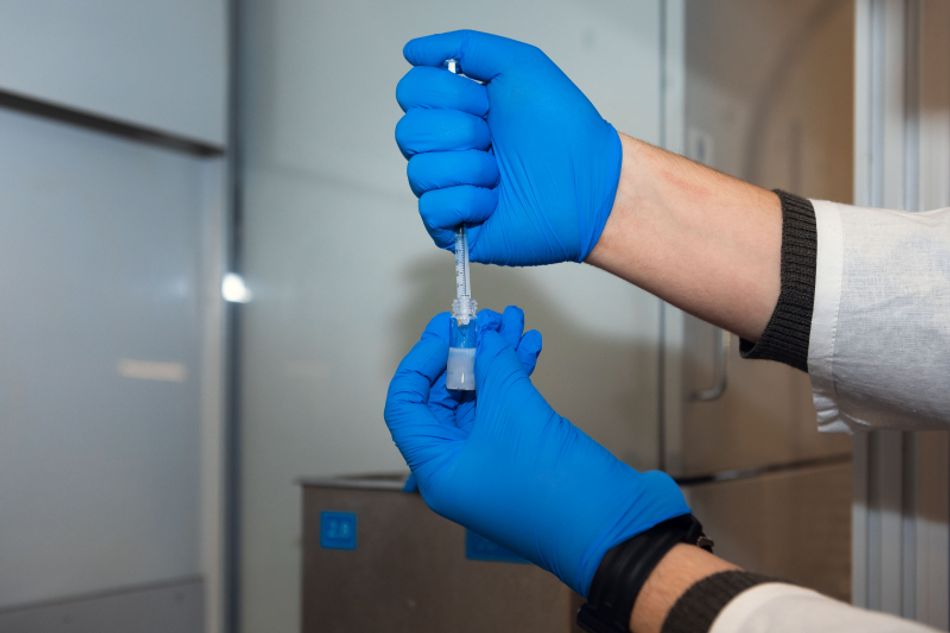 Scientists from ITMO’s ChemBio Cluster focused on the latter application, as anti-counterfeiting protection is not only promising, but also relevant.

“Manufacturers lose over 20% of their income to counterfeiting. But in truth, this is an issue for customers, as well – if it's food or cosmetics that we are talking about, counterfeit goods can be harmful for one’s health. This is why any methods that help deal with counterfeiting are in demand. As of now, there’s a competition between radiofrequency methods and the more classical hidden images methods. RFID tags make use of rare-earth metals, which are also used in electronics and so on; they are currently used to mark upscale goods and aren’t very good for mass production. Plus, they are harmful for the environment, and today, there’s a focus on green technology and renewable sources,” comments Egor Ryabchenko, one of the authors of the research and a Master’s student at ITMO’s ChemBio Cluster.

The level of protection is increased thanks to the gel’s nanoparticles having different optical activity levels; simply put, they start to glow when exposed to light at different wavelengths. This makes it possible to create complex combined patterns that are harder to forge.

“According to this technology, we can create multilayered hidden patterns that can only be seen at different wavelengths. This way, even if the perpetrators succeed in forging a part of the tag, there’s a good chance that they wouldn’t be able to forge the other. What’s more, the difference between the original pattern and the forged one will be immediately apparent.

In addition, thanks to every image being an optically active structure, we can expand the range of methods used for their analysis and verification. For example, it can be a bar code or a QR code that can only be seen in UV light, and its inverted version – only in light at a different wavelength,” explains the researcher.

The scientists plan to continue experimenting with the ink formula so that they can adjust it to the needs of specific industries. By changing the formula, the ink can be made better in terms of thermal resistance (this can be of use to the manufacturers of electronics and equipment), or in terms of plasticity (which is relevant for tagging clothes).