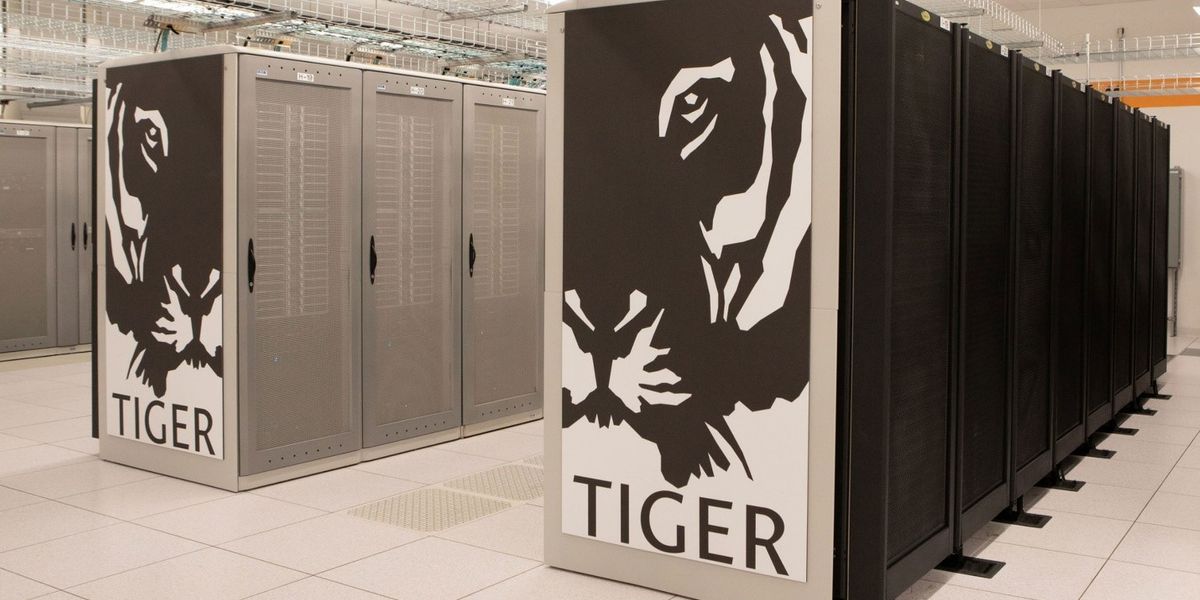 Researchers at Princeton and Rice universities have combined iron, copper, and a simple LED light to demonstrate a low-cost technique that could be key to distributing hydrogen, a fuel that packs high amounts of energy with no carbon pollution.

The researchers used experiments and advanced computation to develop a technique using nanotechnology to split hydrogen from liquid ammonia, a process that until now has been expensive and energy-intensive.

In an article published online Nov. 24 in the journal Science, the researchers describe how they used light from a standard LED to crack the ammonia without the need for high temperatures or expensive elements typically demanded by such chemistry. The technique overcomes a critical hurdle toward realizing hydrogen’s potential as a clean, low-emission fuel that could help meet energy demands without worsening climate change.

“We hear a lot about hydrogen being the ultimate clean fuel, if only it was less expensive and easy to store and retrieve for use,” said Naomi Halas, a professor at Rice University and one of the study’s principal authors. “This result demonstrates that we are moving rapidly towards that goal, with a new, streamlined way to release hydrogen on-demand from a practical hydrogen storage medium using earth-abundant materials and the technological breakthrough of solid-state lighting.”

Hydrogen offers many advantages as a green fuel, including high energy density and zero carbon pollution. It is also used ubiquitously in industry; for example, to make fertilizer, food and metals. But pure hydrogen is expensive to compress for transport and is difficult to store for long periods. In recent years, scientists have sought to use intermediate chemicals to transport and store hydrogen. One of the most promising hydrogen carriers is ammonia (NH3), comprised of three hydrogen atoms and one nitrogen atom. Unlike pure hydrogen gas (H2), liquid ammonia, although hazardous, has existing systems for safe transportation and storage.

“This discovery paves the way for sustainable, low-cost hydrogen that could be produced locally rather than in massive centralized plants,” said Peter Nordlander, a professor at Rice and another principal author.

One persistent problem for advocates has been that cracking ammonia into hydrogen and nitrogen often requires high temperatures to drive the reaction. Conversion systems can require temperatures above 400 degrees Celsius (732 degrees Fahrenheit). That demands a lot of energy to convert the ammonia, as well as special equipment to handle the operation.

Researchers led by Halas and Nordlander at Rice University, and Emily Carter, the Gerhard R. Andlinger Professor in Energy and the Environment and a professor of mechanical and aerospace engineering and applied and computational mathematics at Princeton, wanted to transform the splitting process to make ammonia a more sustainable and economically viable carrier for hydrogen fuels. Using ammonia as a hydrogen carrier has drawn considerable research interest because of its potential to drive a hydrogen economy, as a recent review by the American Chemical Society shows.

Industrial operations often crack ammonia at high temperatures using a wide variety of materials as catalysts, which are materials that accelerate a chemical reaction without being changed by the reaction. Previous research has demonstrated that it is possible to lower the reaction temperature by using a ruthenium catalyst. But ruthenium, a metal in the platinum group, is expensive. The researchers believed they could use nanotechnology to allow cheaper elements like copper and iron to be used as a catalyst instead.

The researchers also wanted to tackle the energy cost of cracking ammonia. Current methods use a lot of heat to break the chemical bonds that hold ammonia molecules together. The researchers believed they could harness light to sever the chemical bonds like a scalpel rather than using heat to shatter them like a hammer. To do so, they turned to nanotechnology, along with a much cheaper catalyst containing iron and copper.

The combination of nanotechnology’s tiny metal structures and light is a relatively new field called plasmonics. By shining light into structures smaller than a single wavelength of light, engineers can manipulate the light waves in unusual and specific ways. In this case, the Rice team wanted to use this engineered light to excite electrons in the metal nanoparticles as a way to split the ammonia into its hydrogen and nitrogen components without the need for intense heat. Because plasmonics requires certain types of metals, such as copper, silver or gold, the researchers added the iron to copper before creating the tiny structures. When finished, the copper structures behave as antennas to manipulate the light from the LED to excite the electrons to higher energies, while the iron atoms embedded in the copper act as catalysts to accelerate the reaction carried out by excited electrons.

The researchers created the structures and conducted the experiments in laboratories at Rice. They were able to adjust many variables around the reaction such as the pressure, the intensity of the light and the light’s wavelength. But calibrating the exact parameters was daunting. To investigate how these variables affected the reaction, the researchers worked with principal author Carter, who specializes in detailed investigations of reactions at the molecular level. Using Princeton’s high-performance computing system, the Terascale Infrastructure for Groundbreaking Research in Engineering and Science (TIGRESS), Carter and her postdoctoral fellow, Junwei Lucas Bao, ran the reactions through her specialized quantum mechanics simulator uniquely able to study excited electron catalysis. Molecular interactions of such reactions are incredibly complex, but Carter and her fellow researchers are able to use the simulator to understand which variables should be adjusted to further the reaction.

“With the quantum mechanics simulations, we can determine the rate-limiting reaction steps,” said Carter, who also holds appointments at Princeton’s Andlinger Center for Energy and the Environment, in applied and computational mathematics, and at the Princeton Plasma Physics Laboratory. “These are the bottlenecks.”

By fine-tuning the process while utilizing the atomic-scale understanding Carter and her team provided, the Rice team was able to consistently extract hydrogen from ammonia using only light from energy-efficient LEDs at room temperature with no additional heating. The researchers say the process is scalable. In further research, they plan to investigate other possible catalysts, with an eye to increasing the process efficiency and decreasing the cost.

Carter, who also currently chairs the National Academies’ committee on carbon utilization, said a critical next step will be to decrease the costs and carbon pollution involved with creating the ammonia that begins the transportation cycle. Currently, most ammonia is created at high temperatures and pressures using fossil fuels. The process is both energy-intensive and polluting. Carter said many researchers are working to develop green techniques for the production of ammonia as well.

“Hydrogen is used ubiquitously in industry and will be used increasingly as fuel as the world seeks to decarbonize its energy sources,” she said. “However, today it is mostly made unsustainably from natural gas — creating carbon dioxide emissions — and is difficult to transport and store. Hydrogen needs to be made and transported sustainably where it is needed. If carbon-emission-free ammonia could be produced, for example, by electrolytic reduction of nitrogen using decarbonized electricity, it could be transported, stored, and possibly serve as an on-demand source of green hydrogen using the LED-illuminated iron-copper photocatalysts reported here.”

The article, Earth-abundant photocatalyst for H2 generation from NH3 with light-emitting diode illumination, was published in the Nov. 25 issue of Science. Besides Carter, Halas and Nordlander, coauthors include Hossein Robatjazi, who received his doctorate at Rice and is now chief scientist of Syzygy Plasmonics; Junwei Lucas Bao, who is now a professor at Boston College; Yigao Yuan, Jingyi Zhou, Aaron Bales, Lin Yuan, Minghe Lou and Minhan Lou of Rice University; Linan Zhou of both Rice and South China University of Technology, and Suman Khatiwada of Syzygy Plasmonics. Halas and Nordlander are co-founders of Syzygy and hold equity in the company.

Support for the research was provided in part by the Welch Foundation, the Air Force Office of Scientific Research, Syzygy Plasmonics, and the Department of Defense.

Rice University’s Office of Public Affairs contributed to this article.

At Princeton Engineering, we bring together people from across academic disciplines, from industry, non-profits and government, from all nations, and from all backgrounds. We value our collaborative culture because it is what is needed to achieve breakthroughs that address the pressing needs of soc...

In a discovery that could speed research into next-generation electronics and LED devices, a University of Michigan research team has developed the first reliable, scalable method for growing single layers of hexagonal boron nitride (hBN) on graphene.

Researchers have developed a concept that would make Martian rocket fuel, on Mars, that could be used to launch future astronauts back to Earth.

Sustainable fuels are based on green hydrogen and carbon dioxide - and should make a significant contribution to decarbonising sectors such as aviation, where fossil fuels are particularly difficult to replace.