Griffin is a student project from the Autonomous Systems Lab at ETH Zürich. Our mission is to combine a flying platform with a robotic arm. In doing so, we aim to develop a robot capable of gripping and manipulating objects in flight.

Setting up an avalanche net or scaffolding, building a powerline, or doing repair work in a power plant still requires human work. Often, this work is dangerous or in a remote place. Thus, numerous safety precautions are necessary, and usually, big machines such as cranes first have to be set up before work can begin. In addition, materials often need to be transported by helicopter. As a result, this type of work is slow and expensive.

We at Griffin believe that drones are the perfect solution to making this work safer, more efficient, and cheaper. The problem with drone technology so far is that drones aren’t yet capable of interacting with their environment precisely and reliably. The applications mentioned above require utmost reliability and precision because zero mistakes can be tolerated.

With our focus project, we aim to push aerial manipulation to new heights. That is, we want to showcase the ability of drones to pick up and place objects in any orientation. While simultaneously exerting a force or torque our drone will not only be able to transport objects but more importantly also be able to interact with its surroundings. By transforming a drone from a simple flying vehicle into a flying manipulator, it won’t be necessary for humans to carry out dangerous construction works anymore.

What is our project?

The goal of the project was to produce an innovative aerial manipulation prototype that intrinsically differentiates itself from existing designs, by integrating the manipulator into the structure. To achieve this, the aerial platform needed to be modeled around the manipulator whose purpose is to correct the positional error of the MAV (micro air vehicle) itself. The aerial manipulator should be able to perform various missions ranging from pick and place tasks to the manipulation of predefined objects. Furthermore, the design should be able to interact with its environment in any conceivable orientation to allow for high flexibility in achievable tasks.

The system that we conceptualized and built was completely novel. To ensure its novelty, our ideation and creation processes were guided by questions like “why do most MAV designs have the propellers situated on the same plane?”. By studying a multitude of research papers we have learned that most implementations of an aerial manipulator remain relatively basic; in most cases they consist of an already established aerial vehicle platform, such as a quad- or hexacopter, with an attached manipulator. 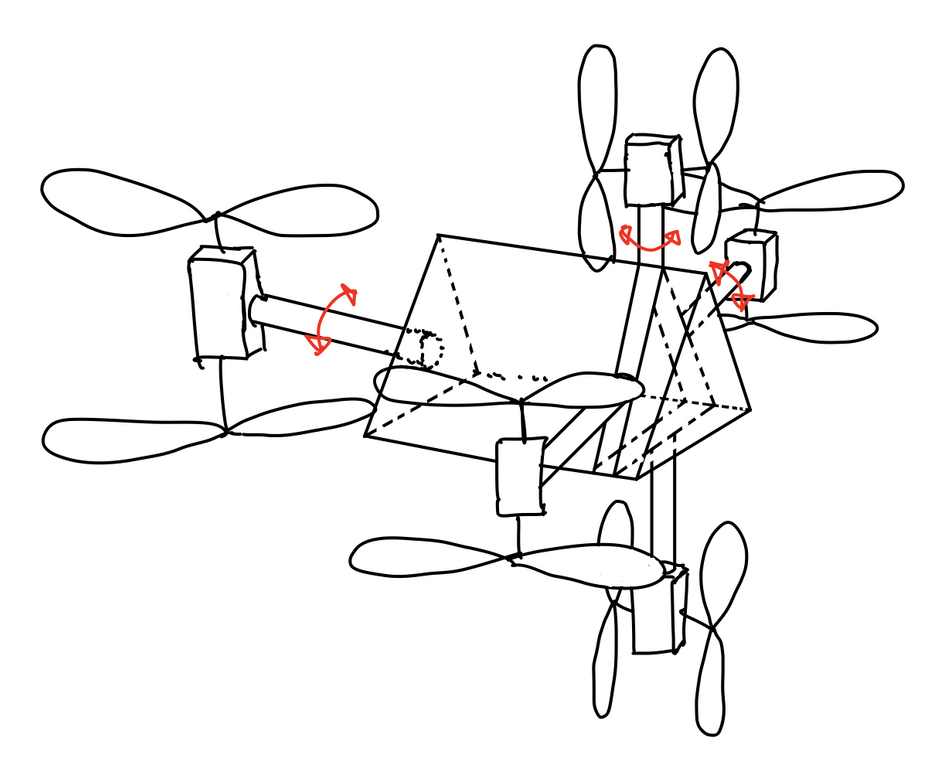 First drawing of the drone.

Our concept of the drone (see image above), called PrisMAV, was heavily inspired by a delta-type 3D printer. It features a prism-like shape to which tiltable rotor groups are attached. Early designs featured four front rotor groups which were later on reduced to three. The linear delta manipulator has prismatic joints which move along the structure of the MAV. To reiterate - the main idea behind PrisMAV was to incorporate the manipulator into the structure of the MAV instead of attaching it to an existing drone platform. Hence, the required electronics were be mounted inside of the prism-like structure, protecting them from impacts. To that end, the manipulator can be retracted into the structure.

In addition to that, we utilize tricopter configurations when starting and landing. Here, the manipulator points downwards during takeoff and landing. To enable the aerial manipulator to interact with its environment, an end-effector that is capable of grabbing various shapes is necessary. Therefore, we chose a compliant finger mechanism that adapts its shape to the grabbed objects and is capable of firmly holding objects of up to 500 grams in place during flight.

With these ideas in mind the team started developing a CAD of PrisMAV. To keep the team in sync we first designed a fundamental concept (see image below), where we defined the built space of all different components. 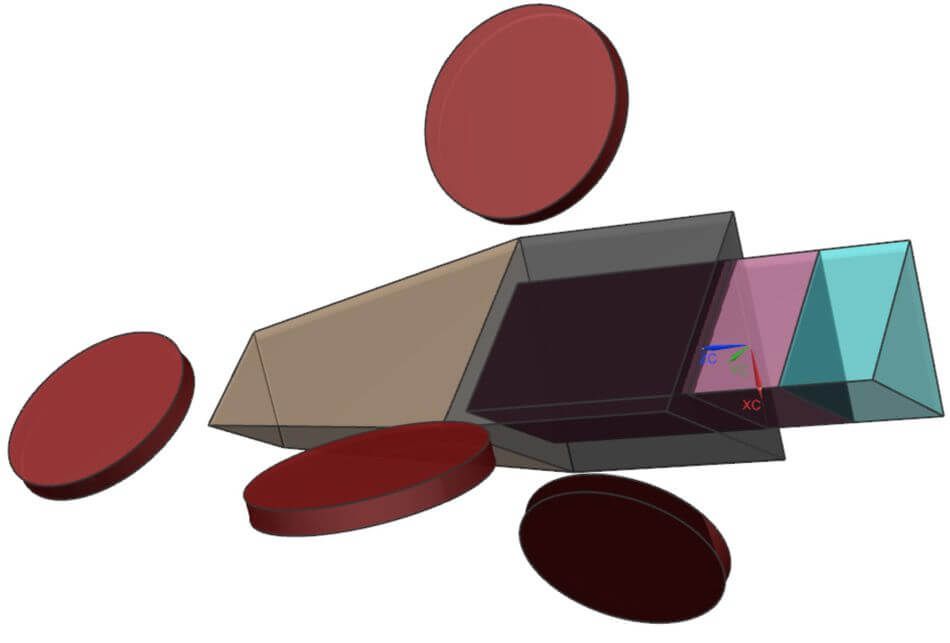 Moreover, we have collaborated with coaches from ASL which led to a final design of our system. 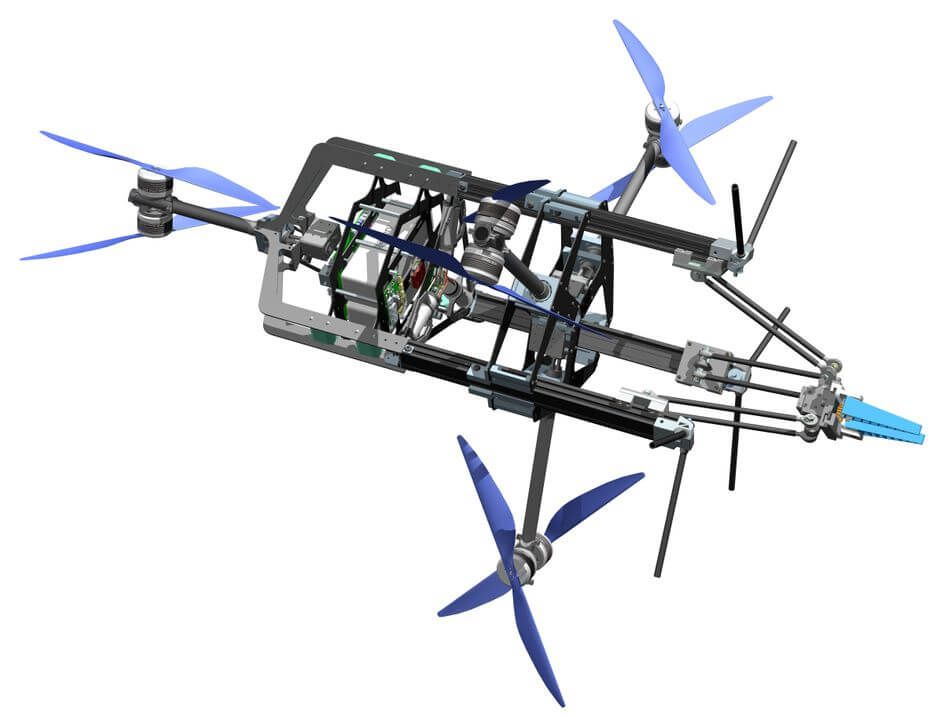 That design was then turned into a full-scale prototype. The materials used vary and different techniques have been used to build certain parts of the prototype. For instance, the structure of our system consists of carbon fiber, while CNC milled aluminum parts were utilized to ensure rigidity in critical sections of the SLS printed sections. 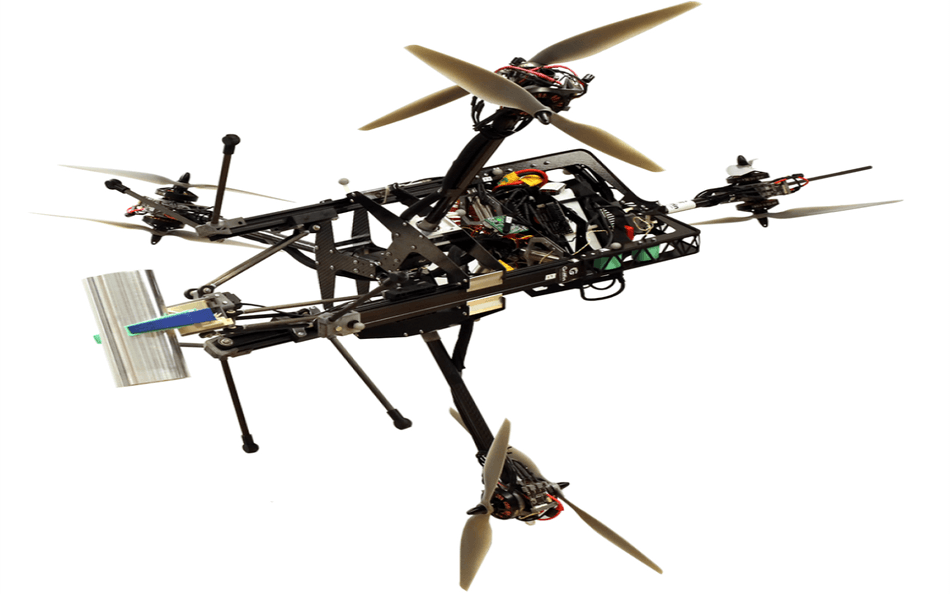 After assembling PrisMAV, it was time to test the system - or to be more specific the manipulator and the platform itself. The test has revealed some weak spots; however, overall, the design was able to hold its integrity. Hence, we proceeded in coupling the manipulator and platform together.

Building the system was only the first half of the project; next we had to implement software to ensure that PrisMAV performed as planned. The next step was to test the end-effector’s capabilities regarding holding a specified setpoint while flying. The graphs below depict the results, where you can see the position of a theoretically fixed end effector (red line) compared to the working manipulator (orange line). 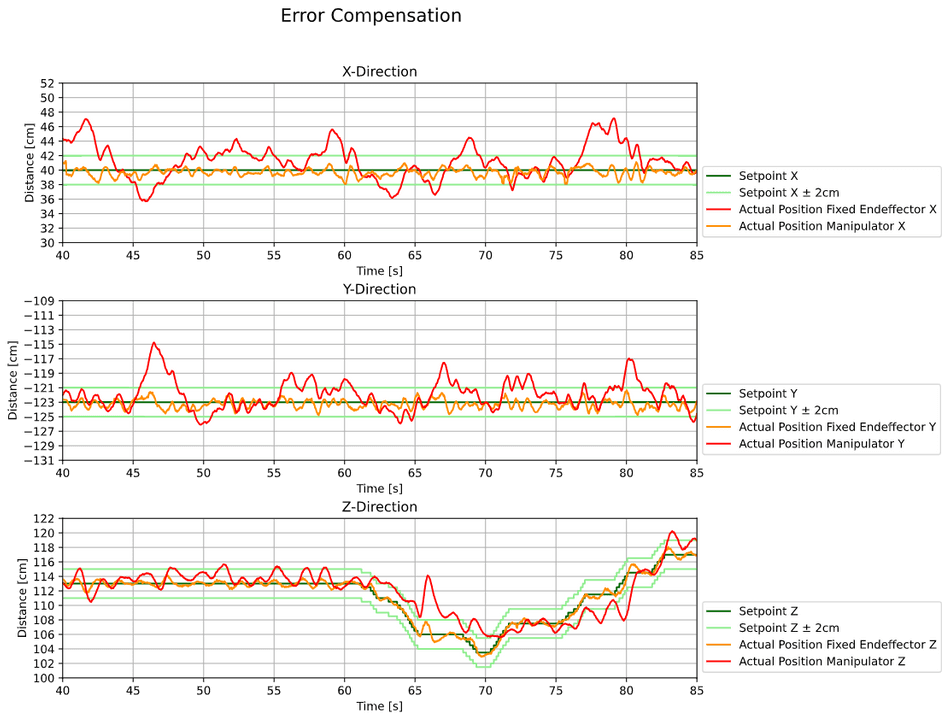 Plots that show the error compensation of our manipulator.

Confident in the test results, the team then went on to get the drone to perform some aerial manipulation tests, with the goal to pick and place objects inclined differently. The procedure can be seen in the videos:

What problem does our project solve?

To illustrate the importance of this project one should think of alpine environments for instance. In such environments, human labour is required, however, as surrounding infrastructure needs to be protected from rockslides. Here, avalanche nets need to be installed, which require specialized workers. Due to the natural characteristics of these environments, these workers have to perform their work in great danger.

With our project, we aim for a solution that tackles such dangerous tasks by pushing the boundary of aerial manipulation to a new level.

What is the current state of the art of our sector?

Even though micro aerial vehicles (MAVs) have gained a significant amount of traction over the past couple of decades, their use case in an industrial setting has been limited to passive applications such as visual inspection, data collection, surveillance, or relatively simple tasks such as spraying pesticides.

Active applications such as interaction with objects or pick and place missions, which may be broadly generalized as aerial manipulation, have not yet gained a foothold in the industry even though such tasks are commonplace for ground and underwater robots. This can be explained by their increased complexity compared to conventional MAVs which restrains them to a field of study in academia. Possible applications of an aerial manipulator are vast, ranging from construction of power lines or setting up avalanche nets to the cleaning of windows on a skyscraper.

Who is the team behind the project?

Team Griffin consists of eight bachelor students who are part of the Autonomous Systems Lab (ASL) at ETH Zürich.

Our project should show the potential of aerial manipulation and encourage engineers to redesign and rethink current systems and inspire new enthusiasm in this field. PrisMAV should act as a foundation to build on and help the upcoming focus projects at ASL to get a deeper understanding of aerial manipulations. 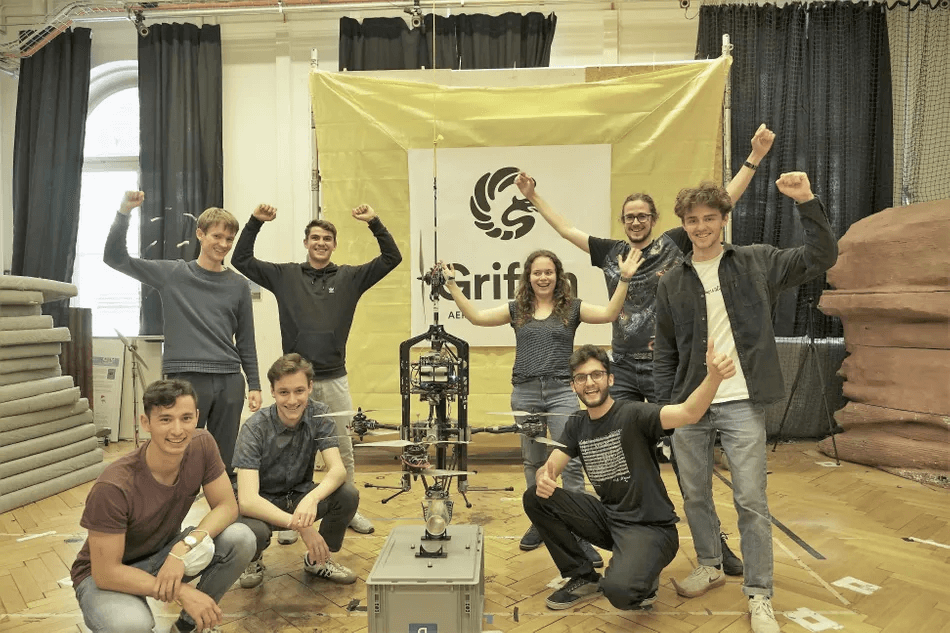