Hand lotion, yogurt, and toothpaste are some examples of colloidal gels, which MIT researchers have now characterized in detail by studying movies of their microstructure.

The term “colloidal gel” may not be a household name, but examples of these materials are everywhere in our daily lives, from toothpaste and shower gel to mayonnaise and yogurt. Colloidal gels are mixtures of particles suspended in fluid, and depending on how they are manipulated, these gels can flow like liquid or hold their shape like a solid.

Now MIT researchers have peered into the microstructure of colloidal gels and identified a surprisingly rich variety of behaviors in these squishy, phase-defying materials.

The team captured movies of colloidal gels as they formed, starting as individual particles in water and evolving into thick, uniform goo. The researchers zoomed in at various size scales to observe any activity in the morphing material, and discovered a range of scale-dependent behaviors.

The researchers say their findings, reported on Feb. 27 in the journal Physical Review Letters, represent the first comprehensive study of the microstructure of colloidal gels. The work may help scientists tune the material properties of a variety of common products.

One example that comes to mind, says study co-author Irmgard Bischofberger, is addressing the problem of the ever-present film of liquid on the surface of most yogurts. This liquid is either jostled out of the bulk of the yogurt during its transport, or it seeps out as a result of gravity, as the yogurt sits on a shelf over an extended period.

“You want to have the yogurt withstand vibrations and gravity and avoid collapsing, but you don’t want to make your whole material stronger in a way that it won’t feel quite right when you eat it,” says Bischofberger, assistant professor of mechanical engineering at MIT. “Knowing all this information of how the material behaves across length scales allows you to find ways to tune a specific aspect of the material.”

Scientists have typically explored the microstructure of colloidal gels using specialized laser setups to scatter light at multiple angles, to capture information about a material at different length scales. Bischofberger says that it would require many experimental runs to capture images of the same material at every resolution.

The MIT team’s collaborator, Cerbino, had previously found that by using a simple optical microscope, with a resolution sharp enough to resolve everything from a material’s individual particles to its bulk properties, he could record movies of the material and then use a computer code to analyze the images at prescribed pixel lengths. For instance, the code could be set to analyze the motions within several pixels, or between hundreds of pixels, or across the entire image. In this way, Cerbino was able to capture the dynamics of a material across all length scales “in a single shot,” Bischofberger says.

Cerbino previously demonstrated this technique, known as differential dynamic microscopy, or DDM, by imaging individual particles in a simple solution. For this new study, the team applied DDM to explore colloidal gels, a more complex class of materials. 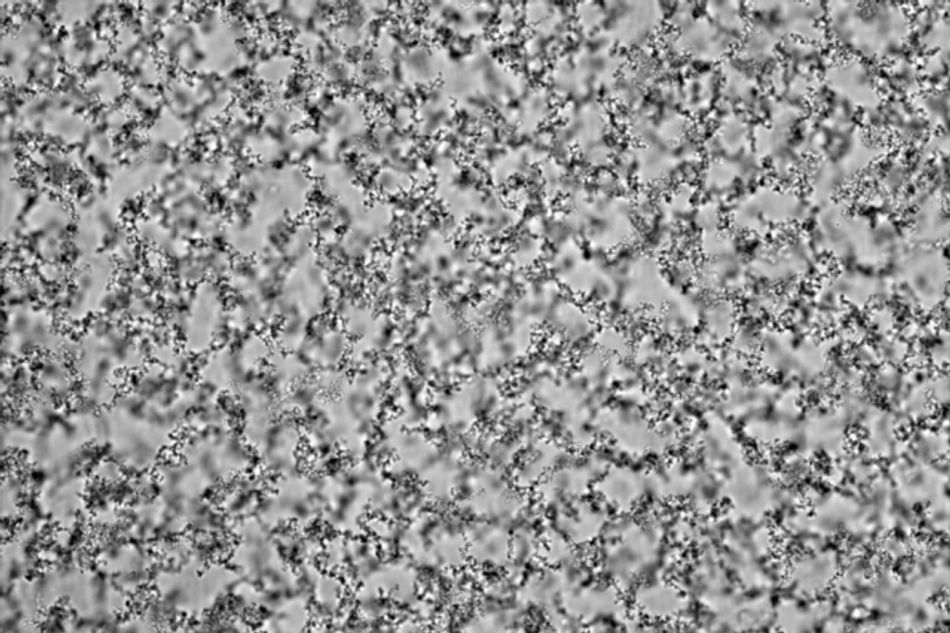 MIT researchers have observed that colloidal gels exhibit a range of motions, from freely wiggling particles at the nano-scale, to more constrained movements at a wider scale. These behaviors may help scientists tune properties of colloidal gels such as yogurts and lotions. Image courtesy of the researchers

Our bodies, our soft selves

Cho first designed a colloidal gel that the group could easily control and study. The material is a mixture of water and polystyrene particles, which Cho chose for their unique outer shell. Each particle is surrounded by a temperature-sensitive shell that, at low temperatures, resembles a spiky exterior that prevents a particle from getting too close to any neighboring particles. In warmer temperatures, the shell effectively shrinks, and the particle’s natural attractive force takes over, bringing it closer to other particles, which it can then attach to.

The researchers mixed the particles at different concentrations with water and placed each sample on a thermoelectric plate, which they set under a conventional optical microscope. They took images of each sample as they turned up the plate’s temperature, and watched the samples evolve into a colloidal gel, turning from a milky liquid, to a thicker, yogurt-like consistency.

Afterward, they used a computer code based on Fourier transform, a type of image processing technique that decomposes an image into various frequencies and spatial scales, to automatically extract motion data at different length scales, from individual particles to large, connected particle networks.

“We use a single movie, composed of many images of a sample, and look at the sample through different windows,” Cho says.

They found that, at the smallest scales, individual particles seemed to move around freely, wiggling and vibrating around each other. As the gel evolved, individual particles clumped together, forming larger strands or networks that moved together in more constrained fashion. At the end of the gel’s formation, multiple particle networks glommed onto each other across the material, forming a sort of stiff web that moved only slightly, as one homogenous structure.

As a colloidal gel transforms from a milky liquid to a thicker, yogurt-like consistency, its structure and motions also change, from individual, freely wiggling particles, to groups of particles that move together, and finally, to larger connected networks of particles that behave as one homogenous material. Courtesy of the researchers

The structures they observed resembled a self-repeating fractal pattern, in which individual particles stuck to each other in ever larger networks and structures. Others have observed this fractal patterning in colloidal gels, over a certain range of length scales. This is the first time scientists have characterized the behavior of colloidal gels both inside and outside this fractal range, simultaneously, and observed different behaviors — in this case, degrees of motion — across different scales.

“It’s this superposition of different modes of motion that gives colloidal gels these extremely rich properties,” Bischofberger says. “They can behave as both liquid and solid. All of that is a consequence of the fact that there is motion on so many different length scales, and that motion is different at different scales.”

The researchers say their new method can be used to explore the microstructure of other soft materials such as biological tissues and cells.

“Our bodies are soft materials like colloidal gels,” Cho notes. “If we use this technique to study biological systems, this could help in optimizing drug delivery, which involves transporting drugs through similar networks.”

The team’s new technique, which is based on optical microscopes that are easily accessible in most laboratories, can be useful in not only characterizing, but also tuning the properties of soft materials.

“If I want a strong material, do I have to play with what happens at the smallest scales or largest scale?” Bischofberger says. “For instance, if you want something with high strength but with a smooth texture what would I need to do to get such a system? Having all this microstructure information helps you know where to start with design.”