Engineers from nTopology, Stress Engineering Services, and Origin joined forces to redesign a family of clamps used on the F-16 aircraft. The result was an optimized design that was 2x stiffer, easy to assemble even with one hand and manufacturable on-demand.

Engineers from nTopology, Stress Engineering Services, and Origin joined forces to redesign a family of clamps used on the F-16 aircraft. The result was an optimized design that was 2x stiffer, easy to assemble even with one hand and manufacturable on-demand. The team passed the initial flight qualification criteria set by the US Air Force in just 30 days. The project was awarded the 1st prize on the Advanced Manufacturing Olympics Approval Sprints challenge.

We are thrilled to announce that the collaboration between Stress Engineering Services, nTopology, and Origin was awarded the grand prize in the Approval Sprints category of the Advanced Manufacturing Olympics — a technical challenge organized by the US Air Force to tackle some of its most significant sustainment issues. This is just an example of what can be achieved by combining proven and trusted approaches to engineering with cutting-edge design and manufacturing technologies.

In this post, we go through some of the highlights of this collaborative engineering project. You will learn more about the final design, our approach to advanced engineering, and the flight qualification process. For those who want to get deeper insights, we hosted a webinar where the engineering team touched upon all of these aspects in greater detail. We also documented this project as a detailed case study.

The New Design of the Hydroclamp

The US Air Force has thousands of unique hydraulic tube clamps (or hydroclamps, for short) in service across its fleet. These clamps fail regularly after a certain amount of time due to exposure to vibrations, chemicals, and heat, so replacement parts must be always in stock. The assignment given by the Air Force’s Rapid Sustainment Office (AFRSO) was to redesign and qualify this family of parts for Additive Manufacturing to overcome the shortcomings of traditional manufacturing processes and supply chains.

The team composed of engineers from 3 different companies worked together across 3 different time-zones to perform more than 30 design iterations in less than 30 days. By following a design-analyze-optimize-print-test methodology, the team managed to pass the strict flight qualification criteria set by the AFRSO, but also create a design that was easier to manufacture, store, and assemble. 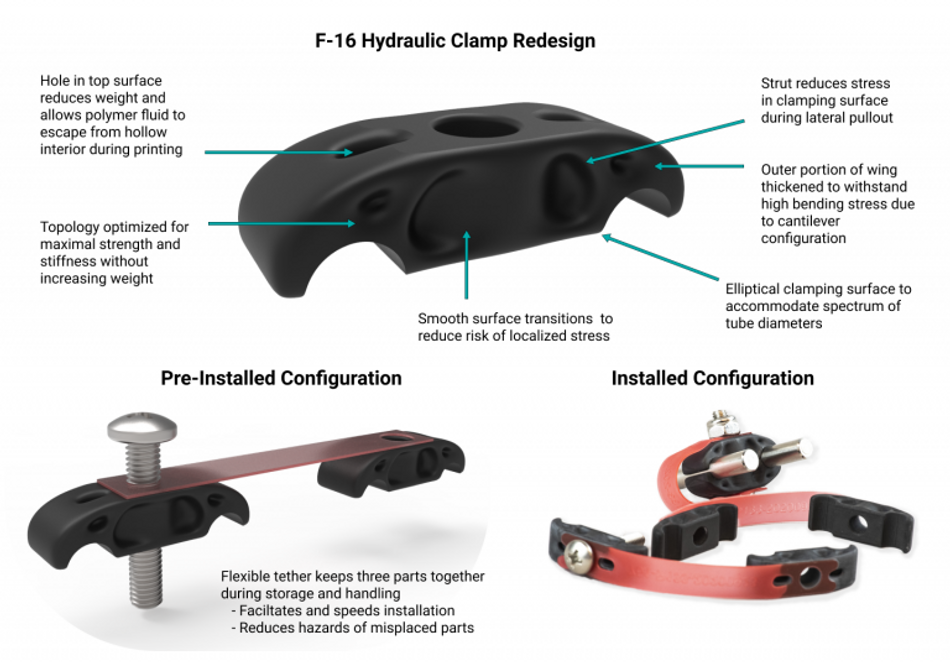 The clamp consists of three parts: two clamp halves and a flexible tether. The clamp halves are 3D printed using a thermoset polymer, specifically formulated for applications in the aerospace industry. The clamp halves were designed using topology optimization to improve their performance.

One of the most innovative features of the design is the incorporation of a flexible elastomeric “lanyard” tether that holds the two clamp components together. The tether allows the assembly to be stored as one piece, enables fitting with just one hand by the technician and it is tearable after the installation.

The team combined traditional approaches to engineering design and CAD with cutting-edge topology optimization and advanced modeling tools to achieve these impressive results and foster collaboration.

Using engineering intuition, they designed the first iteration of the clamp in traditional CAD to benchmark its performance.  To achieve the necessary levels of performance, the two halves were topology optimized using nTop Platform. nTop Platform’s reusable workflows allowed the team to generate design iterations rapidly. They’ve set up the workflow so that the topology optimization could be re-run automatically just by altering input parameters (like loading conditions or other boundary conditions). This allowed them to explore sensitivities in the design space and identify a geometry with truly optimal performance. Origin One printing the clamp

Throughout the design process, simulations were used to guide the design decisions of the team. Multiple analyses were carried out including screw assembly analysis, inertial loading analysis, modal analysis during take-off and landing, print analysis, and non-linear analysis for overtightening. To verify their performance, critical design prototypes were also experimentally tested in the lab.

In all cases, the new design fulfilled the requirements set by the AFRSO and aerospace engineering standards, passing the initial flight qualification step.

The test article under DIC blue light prior to testing 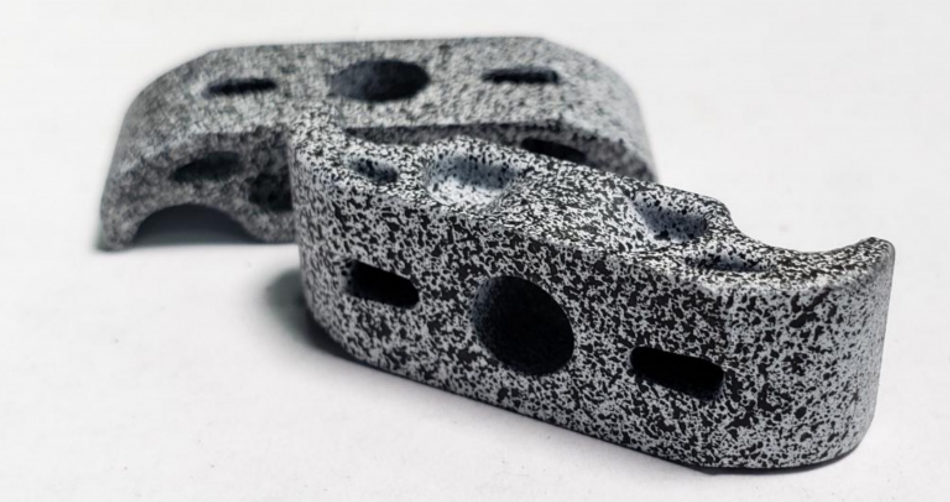 Learn More About this Project

Do you want to learn more about our approach to engineering high-performance parts? We hosted a webinar. The team talked in great detail about all technical aspects of this project in greater detail and explain how they managed to collaborate effectively while working remotely. Also, you can read the full case study or download the case study summary as a PDF.

Owner and driver, Erik Schwartz of Schwartz Off Road Motorsportz is an engineer by trade and spends all of his free time tinkering and maintaining his vehicle to compete in the Championship Off Road Series. Schwartz has become adept at making improvements on the fly.

Fueled by computational modeling and the ability to synthesize data and leverage it within a design, coupled with technology to create complex geometries, industries are able to deliver more cost efficient parts without sacrificing performance.