The current government's goal is the realization of an even distribution of the electrification ratio in Indonesia. However, in 2018 the electrification ratio in Nusa Tenggara Timur (NTT) only reached 62.07%. One of the solutions offered is the implementation of a Bladeless Wind Turbine (BWT). BWT is a type of wind power plant that can work optimally in areas with low wind speeds, 3 to 8 m/s, which is still above the NTT average wind speed, 2.3 m/s.

This study aims to optimize the mechanical design of BWT with shape and size parameters based on the manipulation of the coefficient of friction through computational fluid dynamic simulations that can work optimally according to wind speed in NTT. In this study, 3 design variations were used, namely Initial Design, Modified Design 1, and Modified Design 2. Based on the research that has been done, MD2 has better results than MD1 and ID, and it can be said that MD2 can work optimally in wind speed areas. low. So MD2 is a mechanical design model that is very suitable to be applied in NTT and is expected to be a recommendation in making masts for BWT-based wind power plants in Indonesia.

Electricity is a primary need for world civilization. The need for electricity continues to increase along with the times, this is evidenced by almost all equipment and human activities using electrical energy as the main energy source. Thus, it can be said that electricity has become a very important thing for the world community. Currently, the Indonesian government is trying to achieve equal distribution of electrification throughout Indonesia. However, until 2018 the electrification ratio in NTT only reached 62.07% or more than 3 million people in NTT still cannot use electricity (Kementrian ESDM, 2018). One solution that has been done is the application of wind power plant.

However, conventional wind power plant currently in use can only achieve optimal conditions in areas with average wind speeds of 10 to d. 12 m/s, far from the average wind speed in the NTT region which is only 2.3 m/s. Based on this, an innovative solution is needed, namely the application of wind power plant based on Bladeless Wind Turbine (BWT) which is optimized by mechanical design. BWT is a power plant with high efficiency in areas with low wind speed. The electrical energy converted from kinetic energy is caused by the Von Karman Vortex Street phenomenon which causes resonance and oscillation in the BWT mast. However, BWT can operate optimally in the low wind speed range, which is around 3 to 8 m/s. Therefore, it is necessary to optimize the mechanical design of the BWT mast so that it can operate optimally in NTT where the average wind speed is only 2.3 m/s to achieve an even distribution of the electrification ratio in NTT.

Figure 1. The phenomenon of vortices through the cylinder will produce an oscillating wake characteristic

In the working principle of BWT, energy conversion occurs in the mast section, where the wind hits the mast and makes it vibrate at the same frequency (Fan, Wang, & Tan, 2021). This induced resonance phenomenon is referred to as the Von Karman Vortex Street Effect or vortex shedding (Fig. 1). Vortex shedding is an oscillating flow due to a fluid such as air or water flowing and passing through the mast surface (Thomai et al., 2019). 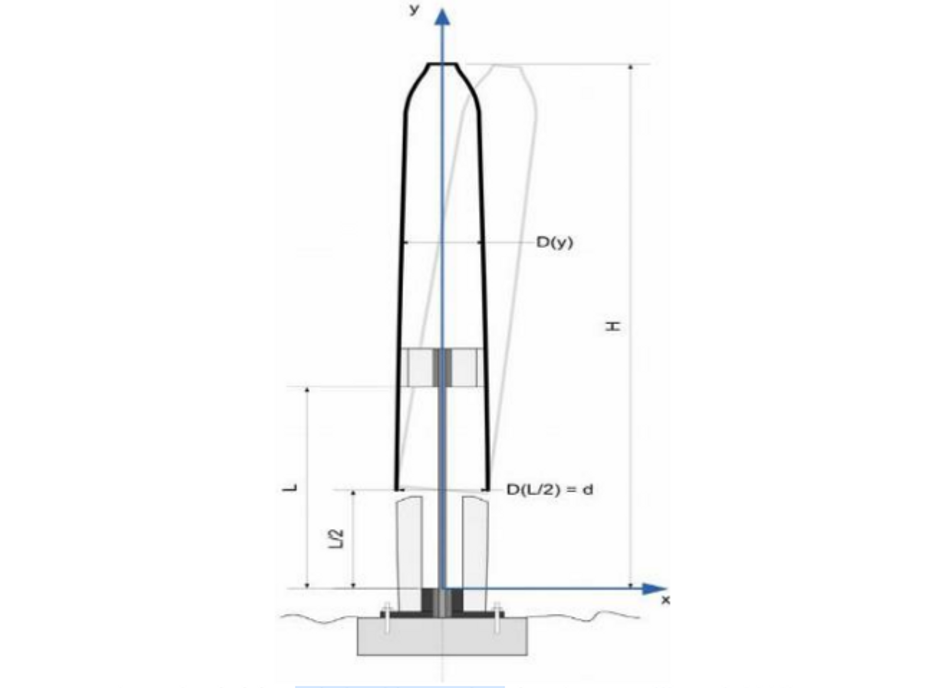 When the fluid hits the projected mast surface area from a wind direction, the streamlines of the fluid will tend to scatter and form a turbulent flow. This is what results in the formation of fluid currents called vortices (Francis et al., 2021). Mast exposed to the wind will tend to oscillate because of the vortices formed in the mast structure and cause linear oscillatory motion, which is then converted into rotational motion to produce electrical energy (Fig. 2) (Abhijit Mane1, 2017; Tandel et al., 2021).

In terms of cost-effectiveness, one of the advantages of BWT is its low cost. Based on the Levelized Cost of Energy (LCOE), BWT will have a low category LCOE and a faster return on investment. Cost reductions can come from the design, use of raw materials, and the unnecessary need for conventional nacelles, support mechanisms, propellers, and wind generators (Manshadi et al., 2021; Tandel et al., 2021). In addition, the simple design of the BWT without the propeller means that lubricating oil is not used so that it can reduce waste. In addition, unlike conventional wind power plants which can disturb wildlife due to the large propellers and noise pollution produced, BWTs without propellers do not harm the surrounding wildlife and the sound produced is so small that it is not disturbing (Yáñez Villarreal, 2018).

The geographical location of Indonesia, whichpasses through the equator, makes Indonesia generally have relatively low wind speeds. According to data from BPS, in 2015, the average wind speed in Indonesia only reached 2.42 m/s with a maximum wind speed of only 4.05 m/s and a minimum of 0.07 m/s. In NTT Province, the average wind speed from the Kupang Climatology Station and Eltari Meteorological Station in February 2020 was 2.3 m/s. In addition, the geographical location of NTT also consists of several mountains and coasts which cause a lot of local winds to blow. The local wind is caused by the difference in heat. The difference in heat between day and night results in a heat difference between the air and land (land winds) and air and ocean (sea breezes). In addition, the heat difference also occurs between air with highlands (mountain winds) and air with lowlands (valley winds) (Tjasyono, 2008).

Coefficient of Side Force

In completing this research, the types of research carried out are literature studies and Computational Fluid Dynamics. Literature study, namely the method used as a theoretical basis in solving scientific problems. This method is carried out by using several journals, books, and statistical data as a reference in the form of writing. In addition, the Computational Fluid Dynamics method is a computer simulation that begins with making an operational model of the system according to the existing problems, then simulating it to obtain a fluid flow model that resembles the actual conditions (Maulana, 2016). The stages of the research carried out are as follows:

Optimizing the BWT design so that it can work well at wind speeds lower than the ideal working range of the BWT, dimensional analysis is needed to determine the variables that can affect the oscillation ability of the BWT. One of the influential variables is the lift coefficient (CL) and drag coefficient (CD), to optimize the performance of the BWT mechanical design changes to manipulate the values of CL and CD that work on the BWT.

Based on the dimensional analysis, to model the optimal BWT design, a large coefficient of friction force (CL/CD) is required. In other words, BWT modelling is carried out by reducing the contact area of the BWT mast which is in the direction of the incoming wind speed. Therefore, this study used three forms of design variations as follows:

1. Initial Design, which is a BWT design in general in the form of a cylinder with a diameter of 10 cm.

2. Modified Design 1, which is a variation of the BWT design in the form of a 5 cm diameter cylinder.

3. Modified Design 2, which is a variation of the BWT design in the form of an ellipse with a short diameter of 5 cm and a long diameter of 15 cm.

2. Air is a Newtonian fluid

a. Inlet as a certain incoming air velocity (u)

b. outlet as out pressure

b. The wind speed for a certain height follows the empirical equation (1)

After the above parameters are defined, a simulation is carried out by iterating the BWT design model with variations in wind speed treatment from 1 to 5 m/s.

The data analysis is carried out by making comparisons based on animation, frequency graphs, and gliding ratio graphs from CFD simulation results to determine the design that works best based on a predetermined speed.

Based on Fig. 6, the MD2 model has a higher frequency value than the other 2 models, which is 8 Hz, followed by the MD1 model of 5 Hz and ID of 2 Hz at a wind speed of 1 m/s. In addition, the frequency value of each model at a wind speed of 5 m/s also shows that the MD2 model has the highest value of 28 Hz, followed by MD1 of 17 Hz and ID of 9.3 Hz. This shows that the MD2 model can oscillate well at wind speeds in the range of 1 m/s to 5 m/s compared to other models. In addition, a graph of the lift coefficient ratio (CL) with the drag coefficient (CD) is also obtained which is presented in Fig. 7.

Figure 7. The value of the drift coefficient in each model at each wind speed

MD2 in general has better results than MD1 and ID,and it can be said that MD2 can work more optimally in areas with low wind speeds, which is 1 to 5 m/s that is suitable with an average wind speed in NTT, average wind speed 2.3 m/s. MD2 is a mechanical design model that is very suitable to be applied to NTT and the design can be expected to be one of the recommendations in making masts for BWT-based Wind Power Plants in Indonesia.

It is hoped that this research will be developed in the future using a 3-dimensional simulation method and with several other design models, so that it is expected to provide more valid findings regarding recommendations for mast mechanical design on BWT.

The authors would like to thank the Department of nuclear Engineering and Physics Engineering UGM and all of those who contributed to acquiring research material.

This article outlines what Swissloop Tunneling is, how Groundhog Alpha is structured, what potential applications it has, which milestones have been achieved, and what is planned for the future.

Envision a solar panel that is fully repairable, upgradable, and recyclable at high value at end of life to support an energy transition that is truly sustainable. The technology and production process will be open source to maximize its reach to all people across the globe.

Martijn Roos defends his PhD on reducing the impact of short circuits in the electricity network of the future.