Waves, whether they are light waves, sound waves, or any other kind, travel in the same manner in forward and reverse directions—this is known as the principle of reciprocity. If we could route waves in one direction only—breaking reciprocity—we could transform a number of applications important in our daily lives. Breaking reciprocity would allow us to build novel “one-way” components such as circulators and isolators that enable two-way communication, which could double the data capacity of today’s wireless networks. These components are essential to quantum computers, where one wants to read a qubit without disturbing it. They are also critical to radar systems, whether in self-driving cars or those used by the military.

A team led by Harish Krishnaswamy, professor of electrical engineering, is the first to build a high-performance non-reciprocal device on a compact chip with a performance 25 times better than previous work. Power handling is one of the most important metrics for these circulators and Krishnaswamy’s new chip can handle several watts of power, enough for cellphone transmitters which put out a watt or so of power. The new chip was the leading performer in a DARPA SPAR (Signal Processing at RF) program to miniaturize these devices and improve performance metrics. Krishnaswamy’s group was the only one to integrate these non-reciprocal devices on a compact chip and also demonstrate performance metrics that were orders of magnitude superior to prior work. The study was presented in a paper at the IEEE International Solid-State Circuits Conference in February 2020, and published May 4, 2020, in Nature Electronics. 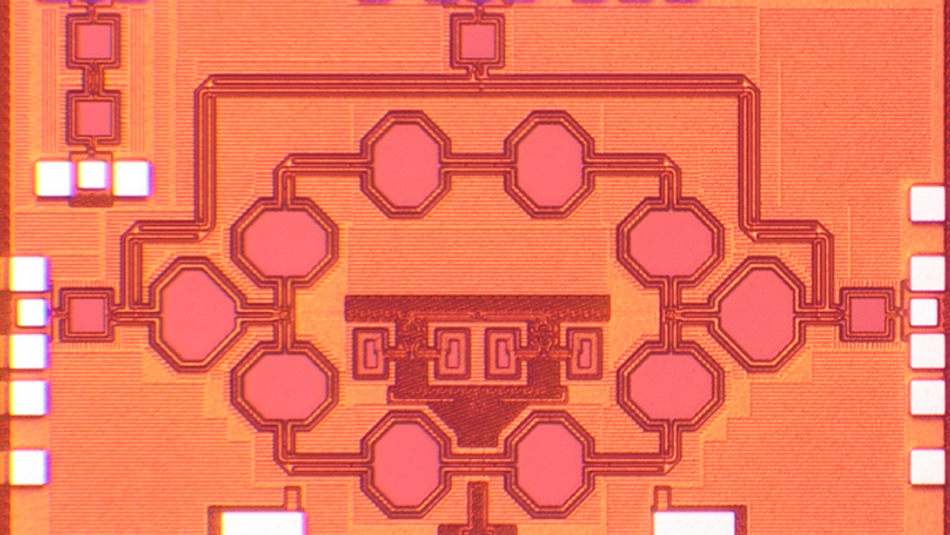 “For these circulators to be used in practical applications, they need to be able to handle watts of power without breaking a sweat,” says Krishnaswamy, whose research focuses on developing integrated electronic technologies for new high-frequency wireless applications. “Our earlier work performed at a rate 25 times lower than this new one—our 2017 device was an exciting scientific curiosity but it was not ready for prime time. Now we’ve figured out how to build these one-way devices in a compact chip, thus enabling them to become small, low cost, and widespread. This will transform all kinds of electronic applications, from VR headsets to 5G cellular networks to quantum computers.”

Traditional “one-way” devices are built using magnetic materials, such as ferrites, but these materials cannot be integrated into modern semiconductor fabrication processes because they are too bulky and expensive. While creating non-reciprocal components without the use of magnetic materials has a long history, advancements in semiconductor technology have brought it to the forefront. Krishnaswamy’s group has been focused on developing  time-varying circuits, specifically circuits driven by a clock signal, that have been shown to achieve non-reciprocal responses.

The original discovery was made in 2017, when Krishnaswamy’s PhD student, Negar Reiskarimian, who is now an assistant professor at MIT and co-author of the Nature Electronics study, was experimenting with a new type of circuit called an N-path filter. She was trying to build a different kind of device called a duplexer, which enables simultaneous transmission and reception but at two separate frequencies. In playing around with that circuit, she connected it in a loop and saw this non-reciprocal circulation behavior.

“At first we didn’t believe what we were seeing and were convinced the simulator was broken,” Krishnaswamy says. “But when we took the time to understand it, we realized that this was something new and really big.”

Over the past four years, Krishnaswamy’s group has been primarily focused on the applications of non-reciprocity in wireless applications, such as full-duplex wireless. Now, having developed this promising new compact chip, they are turning their attention to quantum computing. Quantum computers use components such as circulators and isolators to read qubits without disturbing them. Magnetic circulators and isolators are currently used in these cryogenic quantum computers, but they are large in size and expensive, posing one of the bottlenecks to realizing quantum computers with a large number of qubits. Krishnaswamy’s group is looking into using superconducting Josephson Junctions, the same technology used to make the qubit, to realize chip-scale cryogenic circulators that can be directly integrate with qubits, dramatically reducing cost and size.

Quantum computing. Unlike traditional computers that use bits, quantum computers use qubits to encode information as zeros or ones, or both at the same time.

Researchers find a new way to make nanoscale measurements of fields in more than one dimension.