Researchers developed a flexible, implantable sensor that can continuously monitor nitric oxide in the knee of a rabbit. The gas may indicate the onset of damage-induced osteoarthritis. Credit: Provided by Shangbin Liu/Penn State/Tsinghua University. All Rights Reserved.

If smoke indicates a fire, nitric oxide signals inflammation. The chemical mediator promotes inflammation, but researchers suspect it can do its job too well after anterior cruciate ligament (ACL) ruptures and related injuries and initiate early onset osteoarthritis. Typically, the degenerative disease is only diagnosed after progressive symptoms, but it potentially could be identified much earlier through nitric oxide monitoring, according to Huanyu “Larry” Cheng, James E. Henderson Jr. Memorial Associate Professor of Engineering Science and Mechanics at Penn State.

Cheng and his student, Shangbin Liu, who earned a master’s degree in engineering science and mechanics at Penn State this year, collaborated with researchers based in China to develop a flexible biosensor capable of continuous and wireless nitric oxide detection in rabbits. They published their approach in the Proceedings of the National Academy of Sciences.

The challenge, according to Cheng, is that nitric oxide detection requires highly sensitive and stable electrochemical sensors that are also flexible and biocompatible so the geographic origins of the nitric oxide can be mapped precisely. Corresponding author Lan Yin, associate professor in the School of Materials Science and Engineering at Tsinghua University in China, previously led the development of a flexible, nitric oxide-sensitive electrochemical sensor, but it relied on an electrode configuration that restricted its capabilities.

“The limited surface area made it challenging to simultaneously attain both high sensitivity and high spatial resolution,” Yin said, meaning the device may be able to detect nitric oxide, but may not be able to pinpoint exactly where it originated, so it was not clear if the signal was related to the injury site or surrounding tissue. “Recalibration was also required on a regular basis to ensure desirable accuracy.”

The researchers turned to the potential solution of flexible and biocompatible organic electrochemical transistors (OECTs), which can use voltage and currents to identify and amplify signals. Even small ion concentrations are detectable and amplifiable once they oxidize on the gate electrode and drive ions of the electrolyte into the device’s channel; however, the channel is made of a polymer, known as PEDOT:PSS, that often operates at a different gate voltage than nitric oxide. 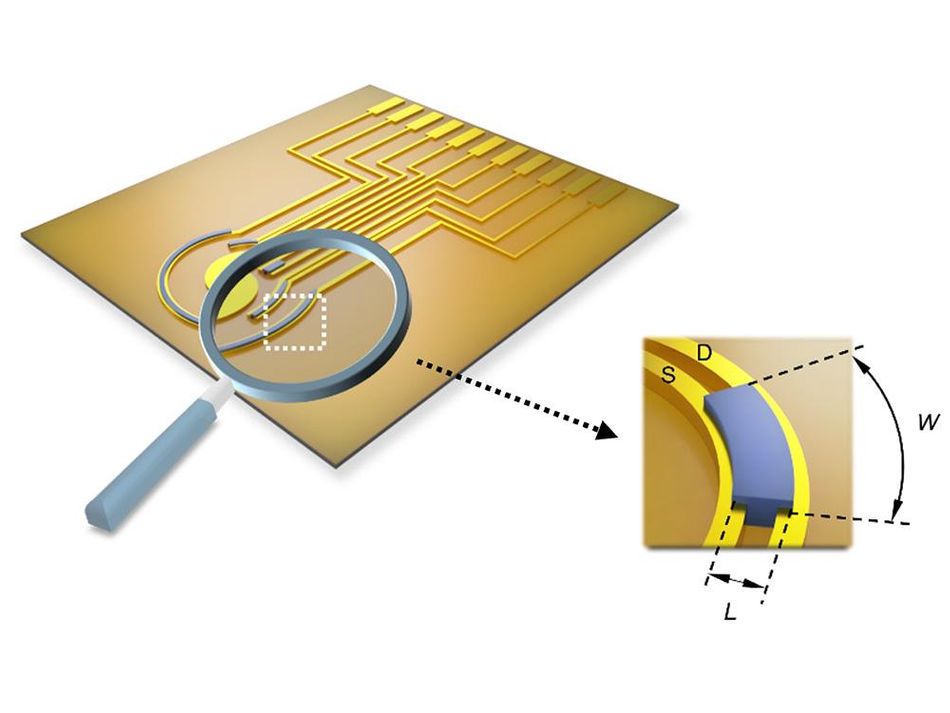 Researchers tuned the channel geometry in the sensing mechanism to optimize how the gas enters the sensing channel prior to detection. The inset image highlights the drain (D), the length (L), source (S) and width (W) of the channel. Credit: Provided by Shangbin Liu/Penn State/Tsinghua University. All Rights Reserved.

“The results indicate that early signs of high nitric oxide concentrations could be correlated with inflammation and cartilage degeneration at the later stage, which could potentially offer essential information to evaluate the progression to osteoarthritis after ACL injury and optimize posttraumatic treatments,” Cheng said.

The researchers plan to continue investigating the connection between nitric oxide concentrations and osteoarthritis and refining the sensing technology, according to Cheng.

Why Companies are Investing in Ambient Temperature Sensors

Engineer to measure the efficiency of comfortable, useful lighting

Inexpensive tin packs a big punch for the future of supercapacitors

Dr. Limei Tian’s current project focuses on developing biosensors to detect biomarkers for an acute kidney injury (AKI), where the kidney suddenly stops working normally. This would involve monitoring the concentration of proteins in urine.

One of the challenges that all building owners face is the constant effort to prevent legionella bacteria in the water supply. Legionella is a water-borne bacterium that can cause Legionnaire’s disease, a lethal respiratory illness.

Why Companies are Investing in Ambient Temperature Sensors

As employees demand healthier workplaces, customers have increased their investments in optimized workplaces and facilities. These are optimizations in all elements of the office environment, like temperature, humidity, and air quality.