The first robotic cutting mechanism — or “end-effector” — for a fully automated, computerized pruning system for modern apple orchards has been designed by a Penn State research team, an early step in the creation of a technology aimed at easing challenges facing tree-fruit growers.

The research is important because the pruning of apple trees comprises about 20% of total pre-harvest production costs, and the tree-fruit industry is struggling with increasing labor costs and a limited labor pool. Automated or mechanical pruning could largely solve those problems, according to researcher Long He, assistant professor of agricultural and biological engineering in the College of Agricultural Sciences.

In the United States, the tree-fruit industry contributes one-fourth, or $18 billion, of all specialty crop production, and apples are one of the most valuable. Pruning is a necessary cultivation technique that affects fruit quality, quantity and the efficacy of pest control, and it is still largely dependent on manual labor, He noted. Between 30 and 50 working hours of skilled labor is required per acre for manual pruning of apple trees.

“Robotics and automation technologies are now extensively used in agriculture, while production operations of tree-fruit crops still depend on manual labor,” said He. “One big reason is that robotic pruning involves several challenges due to the unstructured working environment.” 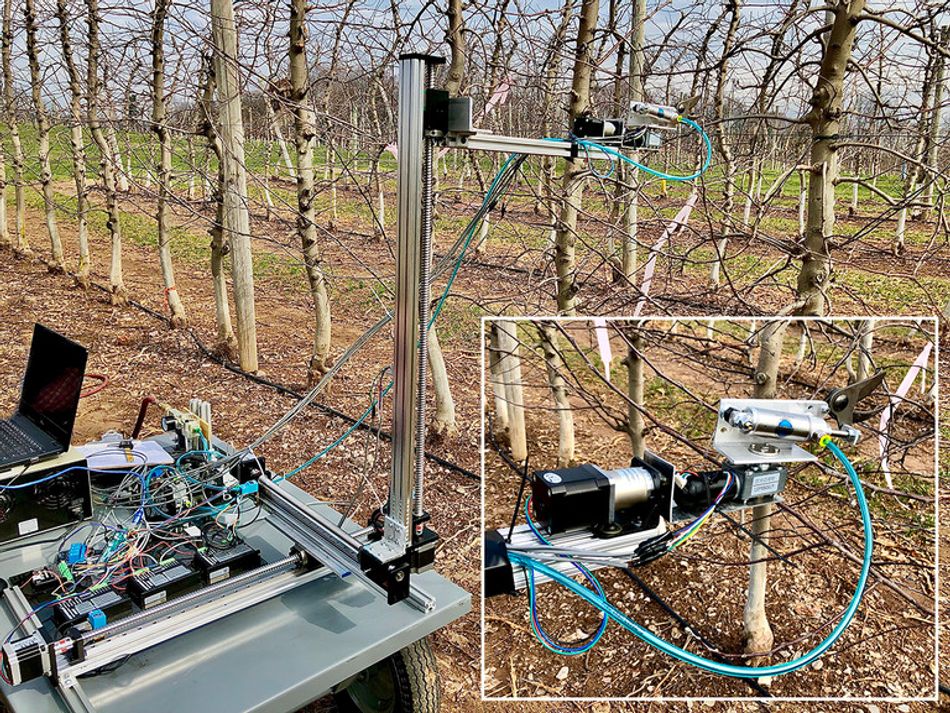 The end-effector prototype in action at Penn State's Fruit Research and Extension Center in Adams County, Pennsylvania. There were major challenges to creating a mechanical system that would succeed in a complex agricultural environment, according to researchers. The robotic cutting unit had to be able to operate in tight spaces and reach targeted branches for pruning while avoiding the tangle of other branches.  Image: Long He Research Group, Penn State

In the study, conducted at Penn State’s Fruit Research and Extension Center in Adams County, Pennsylvania, researchers first measured branch-cutting force with a sensor attached to manual pruners to provide information for the end-effector design. It was developed using two rotary motors, a pneumatic cylinder and a pair of shear-blade pruning cutters. A three-directional linear manipulator was built to house the end-effector and move it to the targeted pruning locations.

To guide the maneuvering of the end-effector and the manipulator control, they developed an embedded microcontroller system with a user interface using an interactive mathematical program that allows calculations to be visualized. A mathematical model was developed for simulation of workspace utilization and reachable points for the end-effector.

The researchers conducted field tests to assess performance of the prototype. In results recently reported in Transactions of the ASABE, they reported that the end-effector successfully cut branches up to about ½-inch in diameter. The field results also showed that the proposed pruning end-effector could cut the branches at a wide range of possible orientations in a given space.

There were two major challenges to creating a mechanical system that would succeed in a complex agricultural environment, noted lead researcher, doctoral degree student Azlan Zahid. First, the robotic arm and cutting unit had to be able to operate in tight spaces because apple trees have many branches and their orientation is random. The cutting mechanism must reach targeted branches for pruning while avoiding the tangle of other branches.

In an innovative move, the researchers incorporated the integrated design of a pruning robot with two rotational joints and three linear/prismatic joints to accomplish this mechanical dexterity. The aim was to reduce the spatial requirements for maneuvering into position and align the cutter perpendicular to the branches. 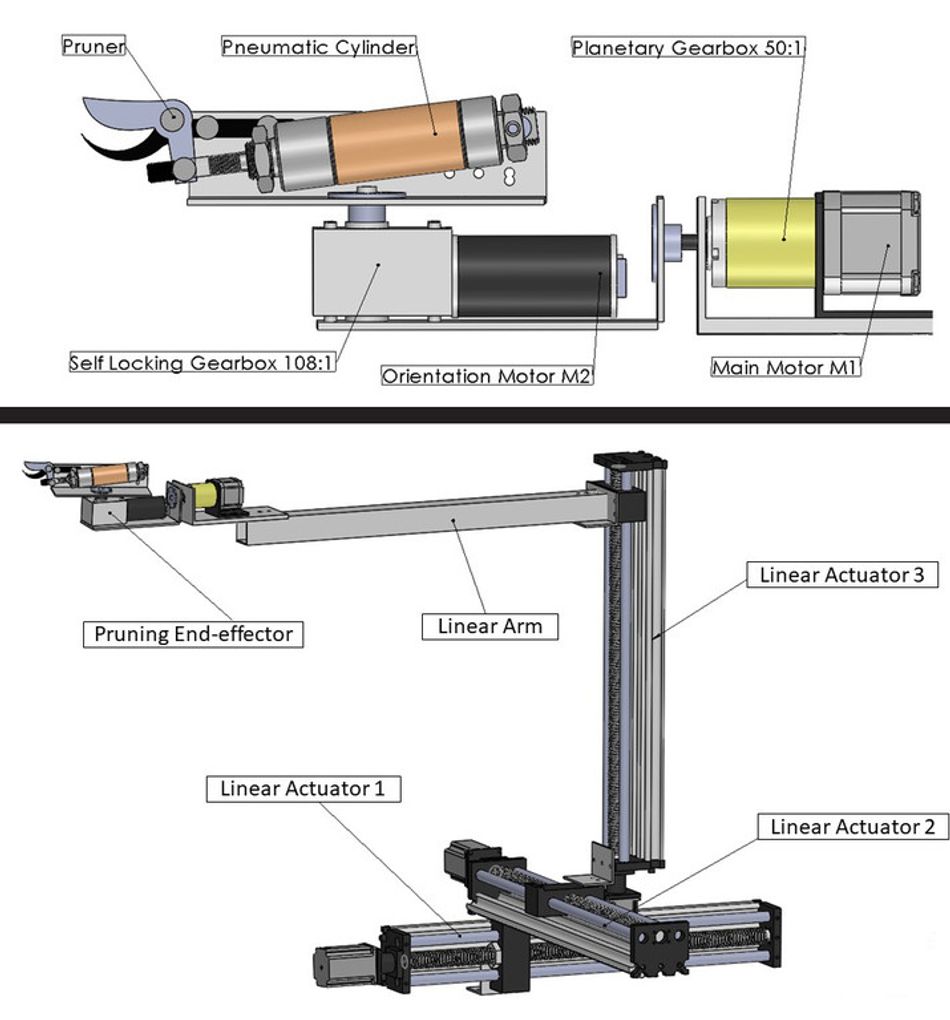 This model of the end-effector developed in this research shows how it achieves a high degree of mechanical dexterity. It is envisioned by researchers as a core component in an entirely automated pruning system for fruit trees.  Image: Long He Research Group, Penn State

The second challenge was “trajectory planning,” Zahid explained. “We had to develop a compact arm and cutting mechanism that can orient itself at almost all possible angles in the work space,” he said. “And we have to reach to any branch, despite the very high chance of having a collision with other branches.”

The robotic end-effector developed in this research is a core component in an entirely automated pruning system for fruit trees, envisioned by He.

Opportunities to collaborate, He added, may depend on whether researchers can get funding from the federal government or stakeholder groups.

Agricultural robots: It all comes down to the right technology

Agricultural technology doesn’t have a good reputation. And yet, developed intelligently, it’s the key to enhancing sustainability and biodiversity in agriculture, says Achim Walter.