Engineers at EPFL’s Platform of Hydraulic Constructions (PL-LCH) in Lausanne have just finished testing the design for the new Massongex-Bex-Rhône (MBR) hydropower dam. The tests began in November 2020 and were carried out on a scale model. They were used to calculate the design’s energy efficiency and make sure the dam will not impact the surrounding natural ecosystem, while reaching its hydroelectric potential. PL-LCH was commissioned in the fall of 2020 by the company overseeing the MBR project. The cantons of Vaud and Valais both granted operating permits for the new dam in September 2020, although some opponents have filed appeals.

By building and running tests on their scale model, the engineers will make sure the plant generates power from the river efficiently and with minimal disruption to the Rhône’s natural river swells, sediment and fish populations. They used the test results to adjust the dam’s geometry so as to improve water flow, and to study how sediment and floating objects will travel across the dam during swells. 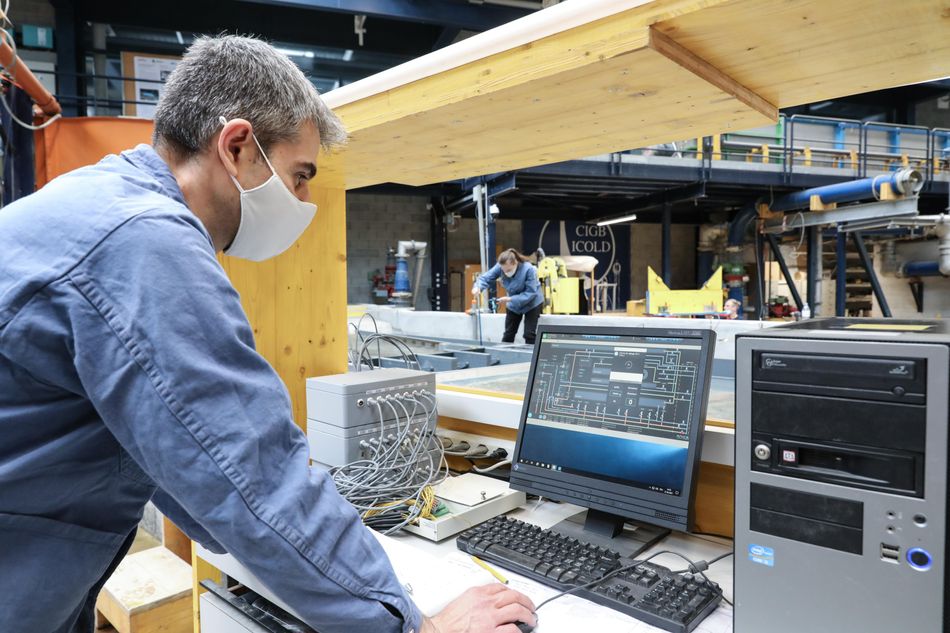 A numerical duplicate of the physical model allows to extend the geometrical simulations to optimally dimension the future dam. © Alain Herzog /2021 EPFL

The engineers’ model was built to 1:45 scale and measures approximately 5 x 12 meters. It replicates around 550 meters of the Rhône river – 300 meters upstream of the dam and 250 meters downstream. It is made out of PVC except for the river bed and banks, which are concrete. The engineers also added a mortar layer and gravel to the river bed and banks, to simulate the rough natural texture. Gravel was also added to the water to model the sediment flowing in the river when it swells, as well as small pieces of wood to see how they would float across the dam.

“Our role is to make sure the dam, spillway, penstocks and outflow and discharge system work correctly from a hydraulic point of view,” says Giovanni De Cesare, a civil engineer and head of operations at PL-LCH. “We also developed a computer model of the dam so that we could run both physical tests and computer simulations. The computer simulations let us see the effects of changing the model’s structure, such as by adding groins to the existing river banks.”

Once it goes online in 2026, the hydropower dam is expected to generate 80 million kWh per year – enough to power 20,000 households. That’s equivalent to the energy produced by 15 wind turbines or by solar panels covering the area of 45 soccer fields.

EPFL has over three decades of expertise in this area – the first studies it conducted for the MBR hydropower dam date back to 1987. And the School’s engineers already worked on similar projects in Lavey (2009), Hagneck (2010) and Chancy-Pougny (2015), and took part in the priority work done on the Rhône river bend at Martigny as part of the third correction of the Rhône River (2018–2020).