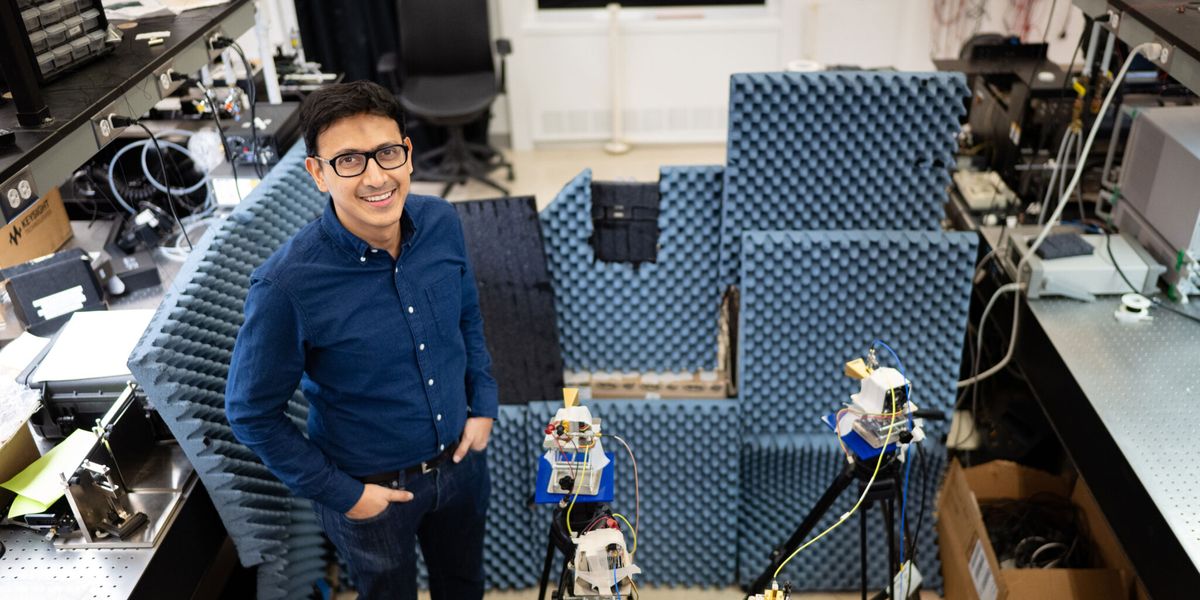 Researchers in Kaushik Sengupta's lab work to expand the capabilities of modern electronics. Photos by Sameer A. Khan/Fotobuddy

Sophisticated antenna arrays paired with high-frequency wireless chips act like superpowers for modern electronics, boosting everything from sensing to security to data processing. In his lab at Princeton, Kaushik Sengupta is working to expand those powers even further.

In recent years, Sengupta’s lab has designed antenna arrays that help engineers make strides toward peering through matter, boosting communications in canyons of skyscrapers, putting a medical lab on a smart phone, and encrypting critical data with electromagnetic waves instead of software.

In a new article in Advanced Science, Sengupta’s research team presented a new type of antenna array based on the paper-folding art of origami. The shape-shifting array, designed like a folded paper box called a waterbomb, allows engineers to create a reconfigurable and adaptable radar imaging surface. To build the system, the team installed a new class of broadband metasurface antennas onto standard, flat panels. Then they connected a number of the antenna panels into a precisely designed origami surface with an offset checkerboard pattern. Through proper sequence of folding and unfolding the panels, the array assumes a variety of different shapes like curves, saddles and spheres. 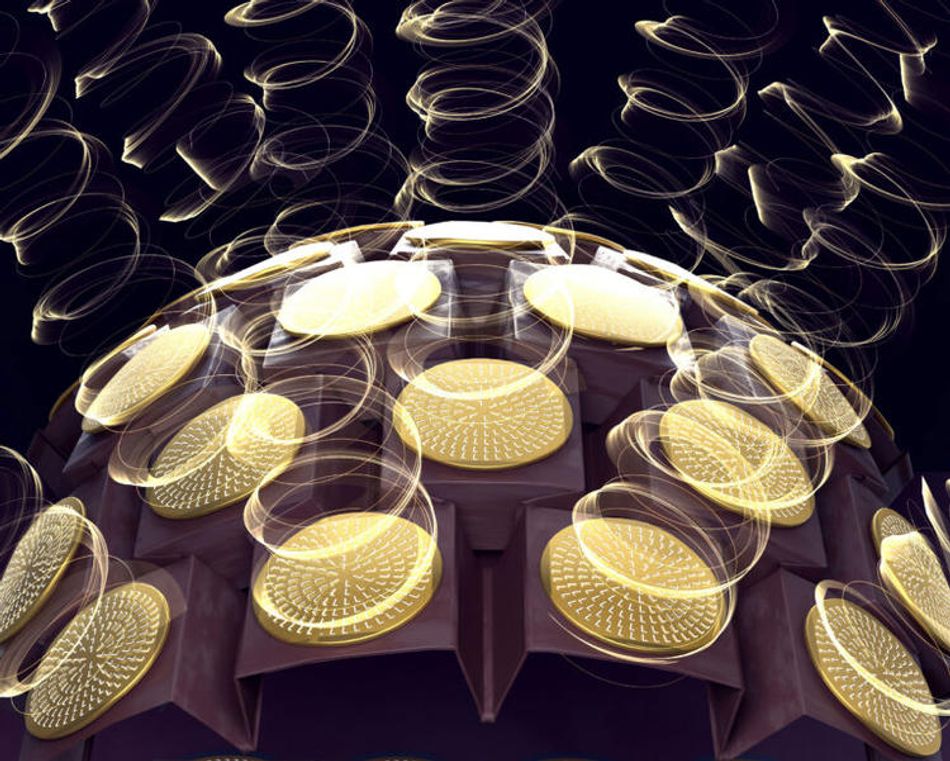 With this ability to shift and expand, the origami system offers a wider resolution and has the ability to capture complex three-dimensional scenes beyond the capability of a standard antenna array. The waterbomb antenna can also morph its shape to manipulate electromagnetic waves in carefully calibrated ways. Combined with advanced algorithms, the waterbomb system can effectively process information from a wide range of electromagnetic fields. This shapeshifting ability allows engineers to expand the capabilities of devices used for sensing and imaging.

“For most applications, planar, or flat, systems are preferred because they are simpler and easier to design,” said Sengupta, an associate professor of electrical and computer engineering. “But reconfigurable systems allow us to substantially expand our ability in computer imaging. Using origami, we are able to combine the simplicity of planar arrays with the expanded ability of reconfigurable systems. It’s like a transformer robot in action.”

Sengupta said origami-based arrays could vastly improve sensing technology needed for autonomous vehicles, robots and cyberphysical systems. The relative simplicity of the individual antenna systems also mean that the sensing arrays can be light and low-cost, making them easier to manufacture and deploy across a wide scale.

While rapid developments in energy and computation usually draw the most public attention, Sengupta and his colleagues at Princeton Engineering focus on the invisible wireless networks that allow these breakthroughs to empower society.

“You can think about all these really complex applications that are emerging — robotics, self-driving cars, smart cities, smart healthcare applications, artificial reality, virtual reality,” he said. “All of these things are sitting on that web of wireless communications.”

Any one of these applications would represent a major increase in demand for wireless networks. Together, they demand a fundamental rethinking of how we move data across the airwaves, both in terms of the microchips designed to handle the traffic and the signals transmitted by those chips. In brief, we need to pack far more information into signals and build computer systems that can process the information quickly, accurate and securely.

In the past few years, Sengupta’s research has been recognized on both fronts. In 2021, he was named Outstanding Young Engineer by the Microwave Theory and Techniques Society (MTT-S), a leading scientific society for wireless communications. Last year, he received the New Frontier Award for his work on microchips from the Institute of Electrical and Electronics Engineers (IEEE), the world’s largest electrical engineering society. 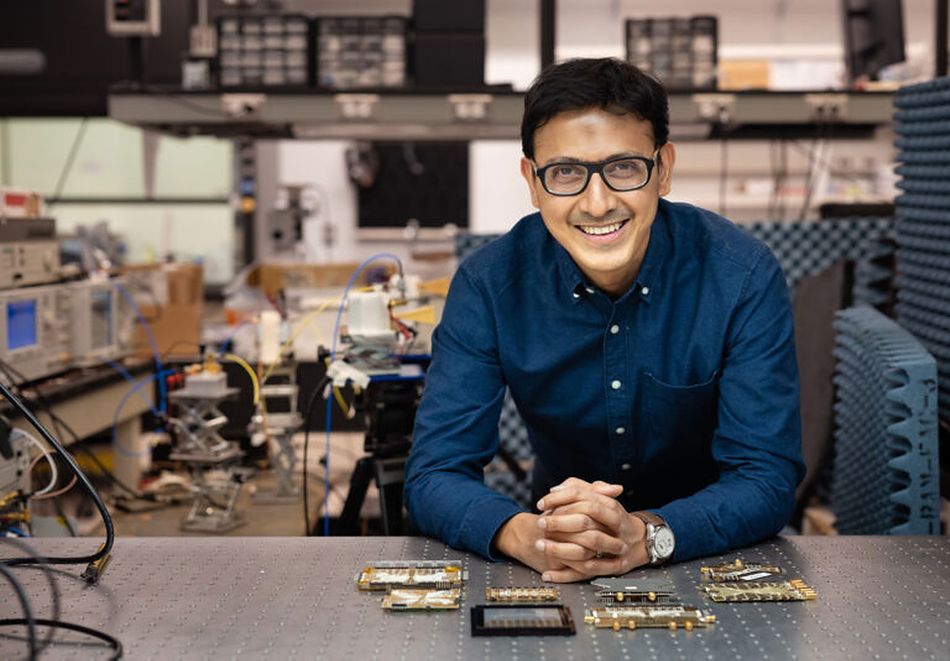 From chip design to signal processing, the awards reflect the broad approach to research taken by Sengupta’s research team at the Integrated Micro-Systems Research Lab. In recent years, his group has demonstrated technology to expand into new frequency bands for faster and more secure transmissions, developed new sensing technology for scientific and medical applications, and produced methods to secure high-demand transmissions without slowing down applications.

In the most recent project, involving waterbomb origami, Sengupta’s research team turned its focus from antenna arrays themselves into methods of shape-shifting multiple arrays into complex systems. The reconfigurable system not only allows for hyper-spectral sensing across a wide range of frequencies, it fuses the information together with the surface topology. This could prove valuable for vehicles and robots that require intensive communications while working in a variety of environments. It also could prove important for other electronic structures that require folding and tuning such as spacecraft and solar panels.

“By eliminating the constraints of flat-panel antenna arrays, we can combine principles of origami with high-frequency electronics and advanced signal processing to create versatile, highly efficient imaging and radar systems,” Sengupta said.

Sengupta said his research team’s technological approach varies across these projects, but the ultimate goal is to solve the challenges that changes will bring to the wireless world. One of those challenges is the data rates that the new applications will require. Take self-driving cars: Most of the focus is on the navigation technology or the processing power that an autonomous vehicle will require, but one of the greatest challenges is creating a wireless network to support the new technology.

“Think about the information deluge of a self-driving car,” he said. Even a single car will require a vast amount of data to navigate a complex road system. For multiple cars sharing a highway, the demands for data will increase even further. “You need very high bandwidth connections, so you need to think about frequencies that we have not used before.”

Medical technology is similarly poised for a massive change, with real-time health monitoring and new devices such as bandages that communicate with remote doctors and adjust treatment based on the patient’s condition.

All of these developments will demand more speed, higher amounts of data delivery and tighter security than modern networks are capable of delivering. Sengupta said solving those problems will require work at both the level of new microchips and the frequencies used to transmit signals.

“The approaches we pursue are multidisciplinary,” he said. “Our approach is to leverage concepts from different fields and merge them to create high-performance systems.”

The article “Origami Microwave Imaging Array: Metasurface Tiles on a Shape-Morphing Surface for Reconfigurable Computational Imaging,” was published Oct. 5, 2022 in Advanced Science. Besides Sengupta, authors include Suresh Venhatesh, of North Carolina State University; Daniel Sturm, of Princeton University; Xuyang Lu, of the University of Michigan-Shanghai Jiao Rong University Joint Institute; and Robert J. Lang, of Lang Origami. The project was supported in part by the U.S. Air Force Office of Scientific Research and the Momental Foundation.

Columbia Engineers develop the smallest single-chip system that is a complete functioning electronic circuit; implantable chips visible only in a microscope point the way to developing chips that can be injected into the body with a hypodermic needle to monitor medical conditions