The thin-film lithium-ion batteries used in microdevices such as portable and medical electronics may supply a good amount of power relative to their mass, but do not provide enough power for many devices due to their limited size. Researchers have introduced a fabrication process that builds microbatteries with thick, 3D electrodes using lithography and electrodeposition – and seals each unit in a gel electrolyte-filled package. The new prototype shows the highest peak power density of any reported microbatteries, the researchers said.

Most microbatteries have very thin, flat anodes and cathodes, which are great for saving space but do not pack the punch needed for the wireless transmission needs of today’s technologies, the researchers said.

“The answer might seem to be to use thicker electrodes, which could hold more energy on a confined footprint, but that alone will only increase the pathway that ions and electrons must travel, cutting down on power,” Sun said. “Using 3D porous electrodes filled with liquid electrolyte can shorten this pathway, but it is extremely challenging to package such microbatteries.”

The team said there is one study that used imprinting lithography to build a 3D microbattery that achieved high peak power using a liquid electrolyte, but the performance of that example was measured from an unsealed battery under laboratory conditions.

In the new study, the team developed a unique capillary filling process that could fill gel electrolyte into the 3D porous electrodes, making airtight packaging of the microbattery possible. 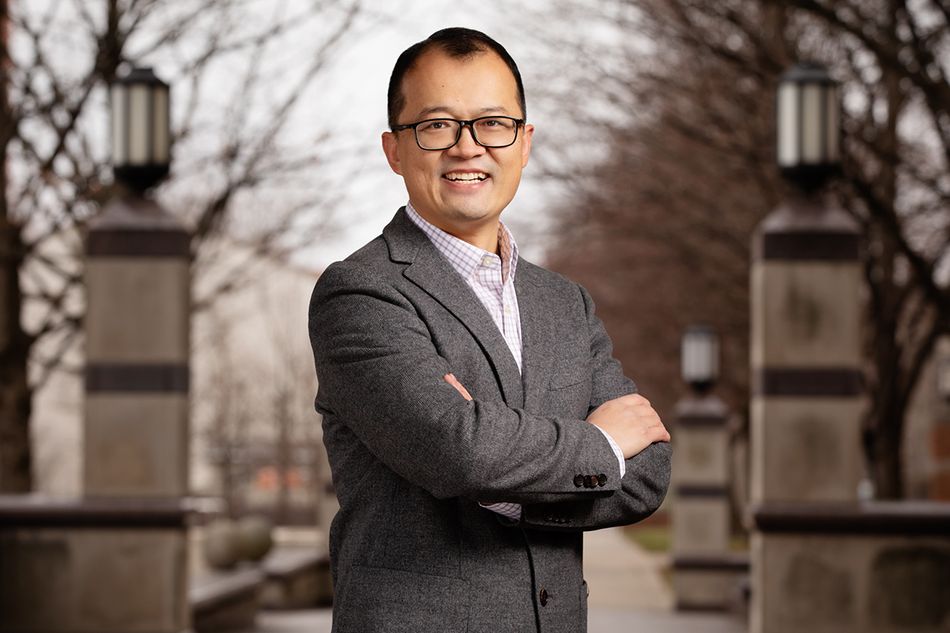 The batteries that power today’s microdevices have very thin electrodes that save space, but do not pack the punch needed for today’s wireless technologies. In response, Illinois postdoctoral researcher Pengcheng Sun and his colleagues have developed a way to make more powerful microbatteries using different materials and fabrication techniques. Photo by L. Brian Stauffer

“Our microbattery could provide a microscale autonomous power for 132 days,” Sun said. “This is based on the reasonable assumption that this type of device draws 5 microwatts in standby mode and 5 milliwatts during data transmission, when the standby time is 100 seconds and the transmit time is 10 milliseconds.”

The team said the fabrication and packaging techniques used in this study could accelerate the development of high-performance solid-state microscale storage devices with complex 3D electrode configurations.

Braun is the Materials Research Laboratory director and also is affiliated with  the Beckman Institute for Advanced Science and Technology, the Holonyak Micro & Nanotechnology Lab and the departments of chemistry and mechanical science and engineering at Illinois.