After touching down on the Red Planet Feb. 18, 2021, NASA's Mars 2020 Perseverance rover will scour Jezero Crater to help us understand its geologic history and search for signs of past microbial life. But the six-wheeled robot won't be looking just at the surface of Mars: The rover will peer deep below it with a ground-penetrating radar called RIMFAX.

Unlike similar instruments aboard Mars orbiters, which study the planet from space, RIMFAX will be the first ground-penetrating radar set on the surface of Mars. This will give scientists much higher-resolution data than space-borne radars can provide while focusing on the specific areas that Perseverance will explore. Taking a more focused look at this terrain will help the rover's team understand how features in Jezero Crater formed over time.

Short for Radar Imager for Mars' Subsurface Experiment, RIMFAX can provide a highly detailed view of subsurface structures down to at least 30 feet (10 meters) underground. In doing so, the instrument will reveal hidden layers of geology and help find clues to past environments on Mars, especially those that may have provided the conditions necessary for supporting life.

"We take an image of the subsurface directly beneath the rover," said Svein-Erik Hamran, the instrument's principal investigator, with the University of Oslo in Norway. "We can do a 3D model of the subsurface - of the different layers - and determine the geological structures underneath." 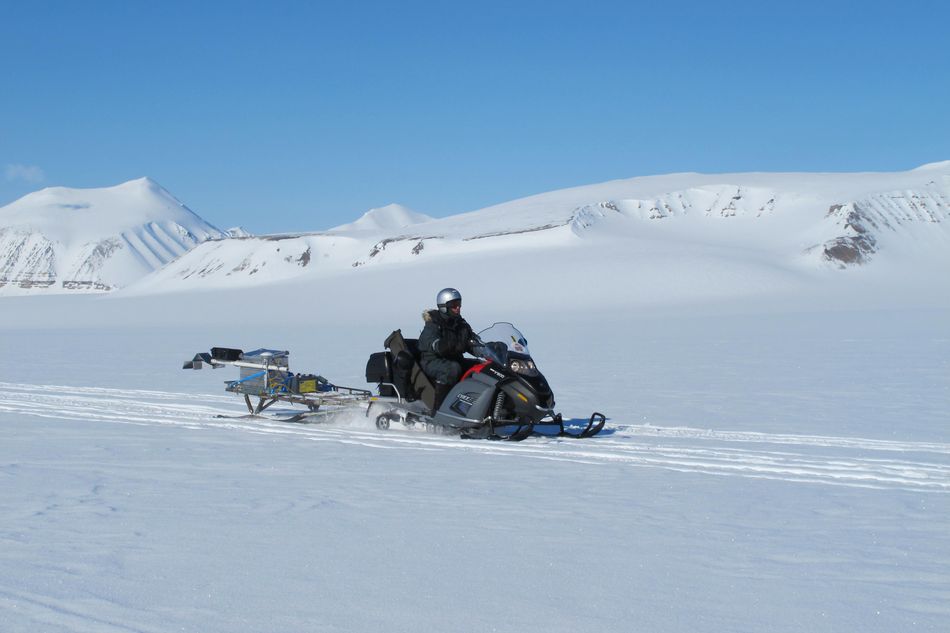 A test model of the RIMFAX instrument - aboard the trailer behind the snow mobile - undergoes field testing in Svalbard, Norway. Image credit: FFI

While Mars is a frigid desert today, scientists suspect that microbes may have lived in Jezero during wetter times billions of years ago and that evidence of such ancient life may be preserved in sediments in the crater. Information from RIMFAX will help pinpoint areas for deeper study by instruments on the rover that search for chemical, mineral, and textural clues found within rocks that may be signs of past microbial life. Ultimately, the team will collect dozens of drill-core samples with Perseverance, seal them in tubes that will be deposited on the surface for return to Earth by future missions. That way, these first samples from another planet can be studied in laboratories with equipment too large to take to Mars.

Traveling Back in Time

Scientists believe the 28-mile-wide (45-kilometer-wide) Jezero Crater formed when a large object collided with Mars, kicking up rocks from deep in the planet's crust. More than 3.5 billion years ago, river channels spilled into the crater, creating a lake that was home to a fan-shaped river delta.

Hamran hopes RIMFAX will shed light on how the delta formed. "This is not so easy, based on surface images only, because you have this dust covering everything, so you may not necessarily see all the changes in geology."

He and his science team will stack successive radar soundings to create a two-dimensional subsurface image of the crater floor. Eventually, data will be combined with images from a camera on the rover to create a 3D topographical image.

The instrument employs the same type of ground-penetrating radar used here on Earth to find buried utilities, underground caverns, and the like. In fact, Hamran uses it to study glaciers. Tens of millions of miles away on Mars, however, he and his colleagues will be relying on Perseverance to do the work as it roams through Jezero Crater. "We do some measurements while we are stationary," he said, "but most measurements will actually be gathered while the rover is driving." 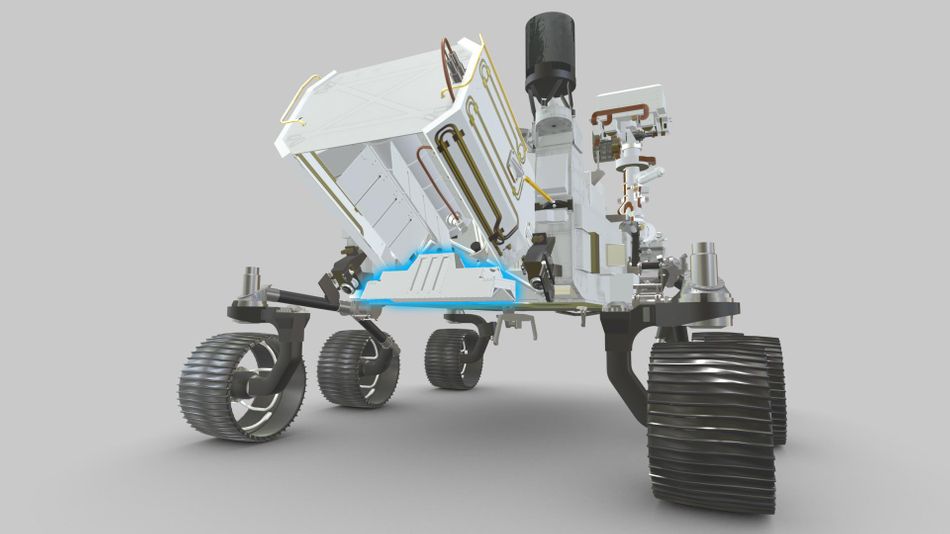 Highlighted in blue in this visualization, the RIMFAX instrument's antenna is externally mounted underneath the MMRTG (the rover's nuclear battery) on the back of Perseverance. With the interactive tool Learn About Perseverance, you can get a closer look at Perseverance and its many features. Image credit: NASA/JPL-Caltech

A key objective for Perseverance's mission on Mars is astrobiology, including the search for signs of ancient microbial life. The rover will characterize the planet's ancient climate and geology, pave the way for human exploration of the Red Planet, and be the first mission to collect and cache Martian rock and regolith (broken rock and dust).

Subsequent missions, currently under consideration by NASA in cooperation with ESA (the European Space Agency), would send spacecraft to Mars to collect these cached samples from the surface and return them to Earth for in-depth analysis.