Expedition 32 Flight Engineer Akihiko Hoshide after undergoing a generic blood draw in the European Laboratory/Columbus Orbital Facility. Duke engineers are building a robot that would replace the need for specialized astronaut training to access a vein for a blood draw or to administer fluids or medication. Photo: Courtesy of NASA

Designing a robot to autonomously place an IV in an astronaut’s arm while in zero gravity requires smart, passionate, persistent engineers. What better team for the project than Duke physician-engineer Dan Buckland, who is both assistant professor of mechanical engineering and materials science and an emergency department physician, and mechanical engineering doctoral student Siobhan Oca?

NASA is on board with the idea, recently funding their project, “Automated Vascular Access for Spaceflight,” through its Human Research Program with a one-year, $150,000 grant.

“NASA needs to both expand the medical capabilities available on a Moon or Mars mission and reduce the number of trained medical personnel required to achieve mission objectives.”

This first step of the long journey toward sending the robot aboard crewed Artemis missions to the Moon, and later Mars, will take place on the ground, however. By the end of this grant, Buckland and Oca hope to have Institutional Review Board approval to test the robot on human arms. Hopefully, that will lead to funding to test the protype during spaceflight. 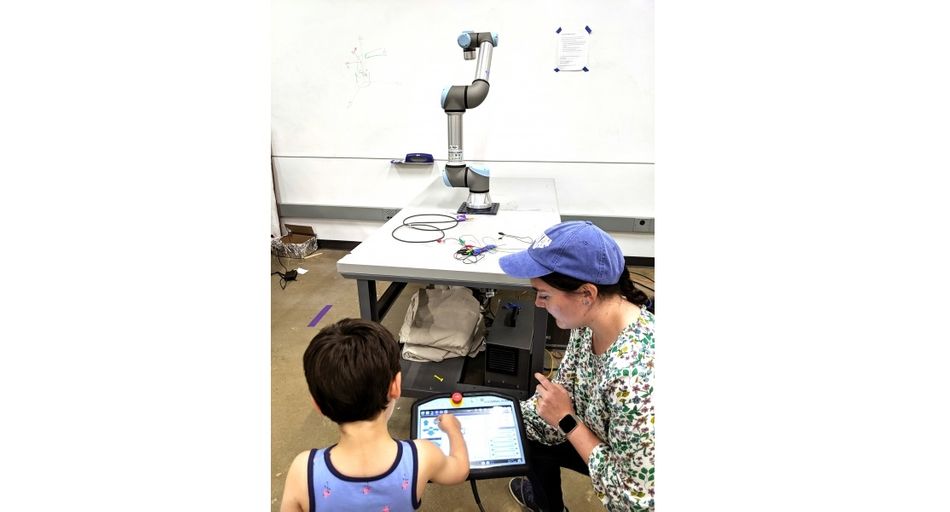 asy as child’s play? While not an official test of its ease of use, Siobhan Oca allows one of Dan Buckland’s children to maneuver the robot’s arm from a touchscreen in the lab. Buckland and Oca are designing this complex medical robot for NASA specifically for astronauts without advanced medical training to use in flight on missions to the Moon or Mars.

Robots that insert IVs into patients’ arms already exist, said Oca, but they all require clinician oversight. The one Buckland and Oca are designing is for use by someone without clinical training or even a clinician nearby. It uses a noninvasive ultrasound probe to locate the correct vein—importantly distinguishing it from an artery. Unlike other robots, though, for human safety it must also have parts that remove easily for sterilization in an onboard autoclave or are disposable. The motor, which cannot be superheated in an autoclave, also needs protection from contamination along with calibration to operate in zero gravity.

“The system must be easy to clean and easy enough to use that you don’t poke yourself with the needle. Add to that, it must be lightweight, reliable and inexpensive,” said Oca. “We’re actually using a fairly low-end, inexpensive ultrasound—that’s the point.”

This project fits into an all-encompassing dream they both have, which is to make medicine more accessible, especially in low-resource settings. Space, with its many constraints and limited onboard supplies, is a low-resource setting. Others here on Earth include the U.S. Indian Health Service with its remote locations and shortage of clinicians.

Oca is no stranger to persistent pursuit of her passion amid constraints, including those that occur without warning. When she was 11, her family fled the devastation of Hurricane Katrina from their native New Orleans and resettled in Richmond, Va. During her freshman year at a public high school for academically gifted students, while on a path to become a doctor in the footsteps of both her parents, she inexplicably lost a significant portion of her vision.

With a still unwavering passion to help people through medicine, she pivoted to undergraduate study of mechanical engineering at MIT and then earned a master’s degree in translational medicine from a joint program at the University of California–Berkeley and the University of California–San Francisco. From there she joined a startup company using her newly acquired know-how in regulation and marketing to help them commercialize a medical device.

“I realized though that I want to be the person who helps to decide the design, and so I decided to go back for my PhD,” she said. That decision brought her to Duke’s PhD program in mechanical engineering and materials science in 2018.

“It was such luck that I get to work with Dan, because he wasn’t on the faculty when I applied to Duke. I kind of fell specifically into medical robotics because of Dan, and I am very excited that I did,” she said.

This is where her persistence comes in—like a well-developed muscle strengthened from daily use. She uses her cell phone to magnify documents for reading and her spatial memory to memorize the layout of icons and commands in software . She also uses many other effective workarounds that have enabled her to mentor undergraduate students in making designs for the ultrasound holder and angling mechanism of the robot using computer-aided design (CAD) software.

“Every new software I have to use, I memorize where everything is. I know where everything is in Microsoft Word,” said Oca. She also plays to one of her strengths, which is coding and programming the human-robot interaction, because she can more easily enlarge it on a screen.

“I’m passionate about building things to help people,” she said.

OPTIMISM, the full-scale engineering model of Perseverance, begins a series of rigorous tests to assess the risk of potential driving hazards on the surface of the Red Planet.