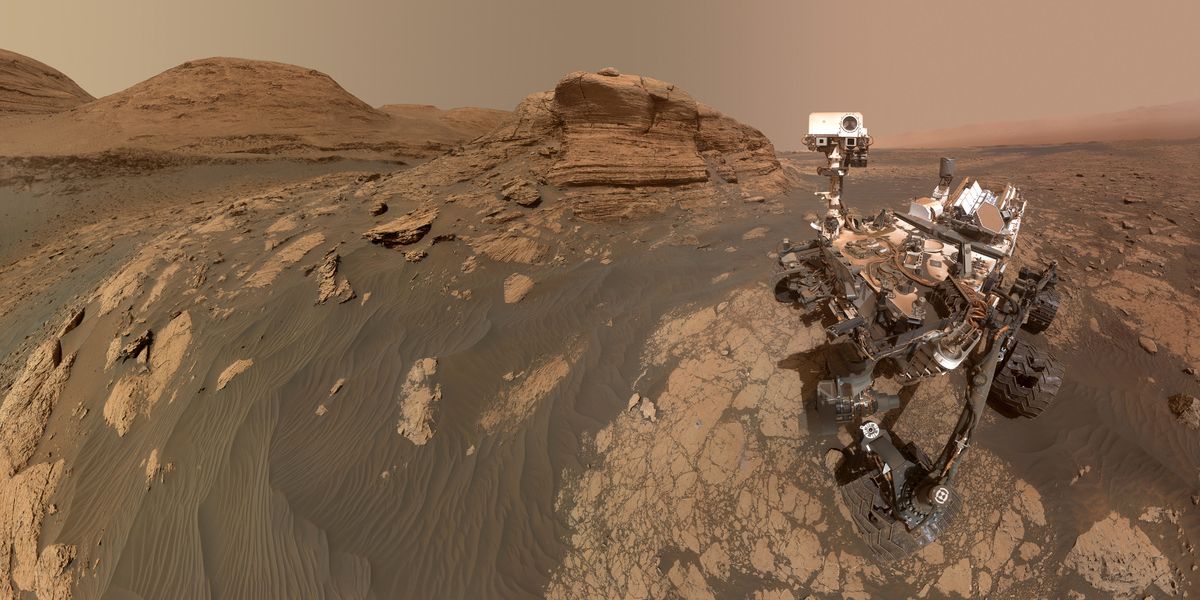 NASA’s Curiosity Mars rover used two cameras to create this selfie in front of Mont Mercou, a rock outcrop that stands 20 feet (6 meters) tall. The panorama is made up of 60 images from the MAHLI camera on the rover’s robotic arm along with 11 images from the Mastcam on the mast, or “head,” of the rover. Credit: NASA/JPL-Caltech/MSSS

At the start of March, NASA’s Curiosity Mars rover began approaching an impressive rock formation that scientists dubbed “Mont Mercou,” a nickname taken from a mountain in France. Standing about 20 feet (6 meters) tall, the outcrop is captured in all its majesty in a new selfie, as well as in a pair of panoramas that offer a 3D view. The selfie shows Curiosity in front of Mont Mercou with a new drill hole nearby at a rock sample nicknamed “Nontron” – the mission’s 30th sample to date.

NASA’s Curiosity Mars rover used its Mastcam instrument to take the 32 individual images that make up this panorama of the outcrop nicknamed “Mont Mercou.” It took a second panorama to create a stereoscopic view. Both panoramas were taken on March 4, 2021, the 3,049th Martian day, or sol, of the mission. Credit: NASA/JPL-Caltech/MSSS

Curiosity’s drill powderized the sample before trickling it into instruments inside the rover so the science team could get a better understanding of the rock’s composition and what clues it might offer about Mars’ past. This area is at the transition between the “clay-bearing unit” Curiosity is departing and the “sulfate-bearing unit” that’s ahead on Mount Sharp, the 3-mile-tall (5-kilometer-tall) mountain that the rover has been rolling up since 2014. Scientists have long thought this transition might reveal what happened to Mars as it became the desert planet we see today.

France’s Mont Mercou is located near the village of Nontron in the southeast of the country. The team chose Nontron-related nicknames for this part of the Red Planet because Mars orbiters detected nontronite, a type of clay mineral found close to Nontron, in the region. Surface missions assign nicknames to landmarks to provide the mission’s team members a common way to refer to rocks, soils, and other geologic features of interest.

NASA’s Curiosity Mars rover used its Mastcam instrument to take the 126 individual images that make up this 360-degree panorama on March 3, 2021, the 3,048th Martian day, or sol, of the mission. Credit: NASA/JPL-Caltech/MSSS

Curiosity also provided a pair of panoramas using its Mastcam on March 4, 2021, the 3,049th Martian day of the mission. By shooting one panorama from about 130 feet (40 meters) away from the outcrop, then rolling to the side and shooting another from the same distance, the rover created a stereoscopic effect similar to those seen in 3D viewfinders. Studying the outcrop from more than one angle helps scientists get a better idea of the 3D geometry of Mount Mercou’s sedimentary layers. An anaglyph of the image can be viewed through red-blue glasses, which you can learn to make here.

In addition to the stereo view and the selfie, Curiosity took a 360-degree panorama of Mont Mercou and its surroundings with its Mastcam.

A challenging feat for a little robot: Honey the Astrobee must grasp and transport Bumble the Astrobee. To pull it off, Honey needs to understand Bumble's trajectory, position itself correctly and avoid a collision at all costs.