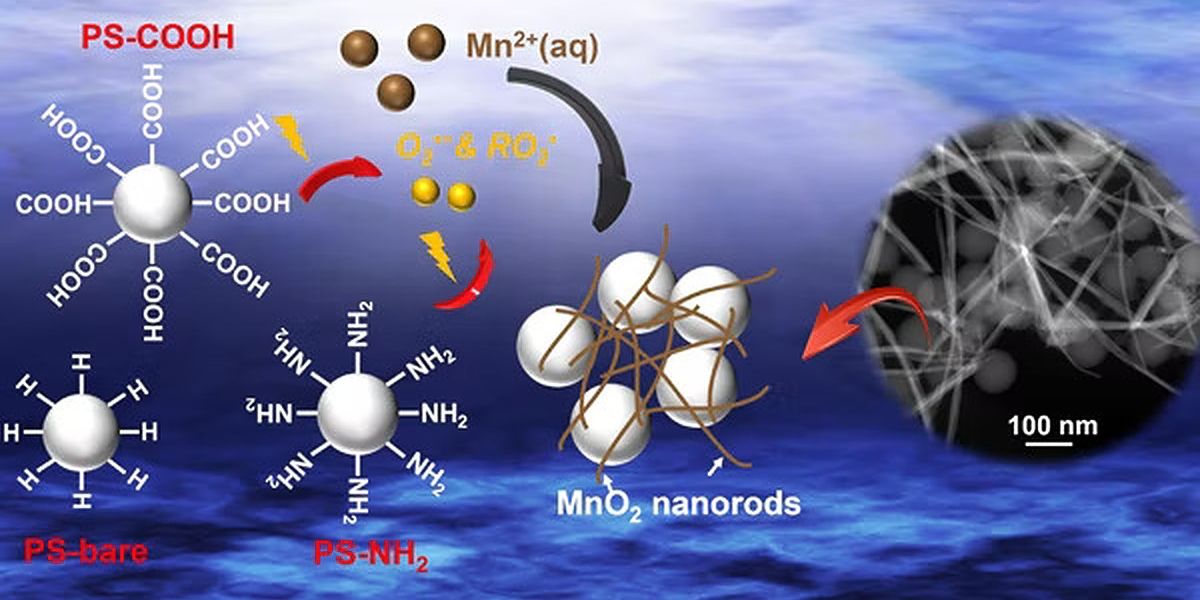 Plastics are ubiquitous in our society, found in packaging and bottles as well as making up more than 18% of solid waste in landfills. Many of these plastics also make their way into the oceans, where they take up to hundreds of years to break down into pieces that can harm wildlife and the aquatic ecosystem.

A team of researchers, led by Young-Shin Jun, professor of energy, environmental & chemical engineering in the McKelvey School of Engineering at Washington University in St. Louis, analyzed how light breaks down polystyrene, a nonbiodegradable plastic from which packing peanuts, DVD cases and disposable utensils are made. In addition, they found that nanoplastic particles can play active roles in environmental systems. In particular, when exposed to light, the nanoplastics derived from polystyrene unexpectedly facilitated the oxidation of aqueous manganese ions and formation of manganese oxide solids that can affect the fate and transport of organic contaminants in natural and engineering water systems.

The research, published in ACS Nano Dec. 27, 2022, showed how the photochemical reaction of nanoplastics through light absorption generates peroxyl and superoxide radicals on nanoplastic surfaces, and initiates oxidation of manganese into manganese oxide solids.

“As more plastic debris accumulates in the natural environment, there are increasing concerns about its adverse effects,” said Jun, who leads the Environmental Nanochemistry Laboratory. “However, in most cases, we have been concerned about the roles of the physical presence of nanoplastics rather than their active roles as reactants. We found that such small plastic particles that can more easily interact with neighboring substances, such as heavy metals and organic contaminants, and can be more reactive than we previously thought.”

Jun and her former student, Zhenwei Gao, who earned a doctorate in environmental engineering at WashU in 2022 and is now a postdoctoral scholar at the University of Chicago, experimentally demonstrated that the different surface functional groups on polystyrene nanoplastics affected manganese oxidation rates by influencing the generation of the highly reactive radicals, peroxyl and superoxide radicals. The production of these reactive oxygen species from nanoplastics can endanger marine life and human health and potentially affects the mobility of the nanoplastics in the environment via redox reactions, which in turn might negatively impact their environmental remediation.

“The smaller particle size of the polystyrene nanoplastics may more easily decompose and release organic matter because of their larger surface area,” Jun said. “This dissolved organic matter may quickly produce reactive oxygen species in light and facilitate manganese oxidation.”

“This experimental work also provides useful insights into the heterogeneous nucleation and growth of manganese oxide solids on such organic substrates, which benefits our understanding of manganese oxide occurrences in the environment and engineered materials syntheses,” Jun said. “These manganese solids are excellent scavengers of redox-active species and heavy metals, further affecting geochemical element redox cycling, carbon mineralization and biological metabolisms in nature.”

Jun’s team plans to study the breakdown of diverse common plastic sources that can release nanoplastics and reactive oxidizing species and to investigate their active roles in the oxidation of transition and heavy metal ions in the future.

A new coating developed by researchers prevents fogging on transparent surfaces. Rather than using electricity, the coating relies on sunlight to heat the surface.