3D printing has the potential to revolutionize everything from hyper-local supply chains to rapid prototyping — but the technology itself is still relatively new, with plenty of room for improvement.

A team of engineers at Stanford and Harvard Universities, though, believe they have a way to considerably boost both the speed and the efficiency of additive manufacturing — by printing objects volumetrically within a thick jelly-like resin, requiring no support structures regardless of the shape or complexity of the printed object.

Shining a light on nanotech

The approach taken by the team, known as triplet-triplet-annihilation, is built on the same principles as two-photon photopolymerization. Where a single-photon printing approach can’t be used within a static volume, as the resin would be cured along the length of the beam as well as at the target point, two-photon printing uses the interaction between two beams, neither of which alone will react with the resin, to solidify the material.

The problem with two-photon photopolymerization is that is requires expensive ultra-fast laser light sources and prints extremely slowly. To get around both issues, triplet-triplet-annihilation uses only a relatively simple continuous-wave laser source running at less than 4 milliwatts of power — converting the energy into one capable of hardening the resin using nanoencapsulated upconversion solution distributed liberally throughout the resin. 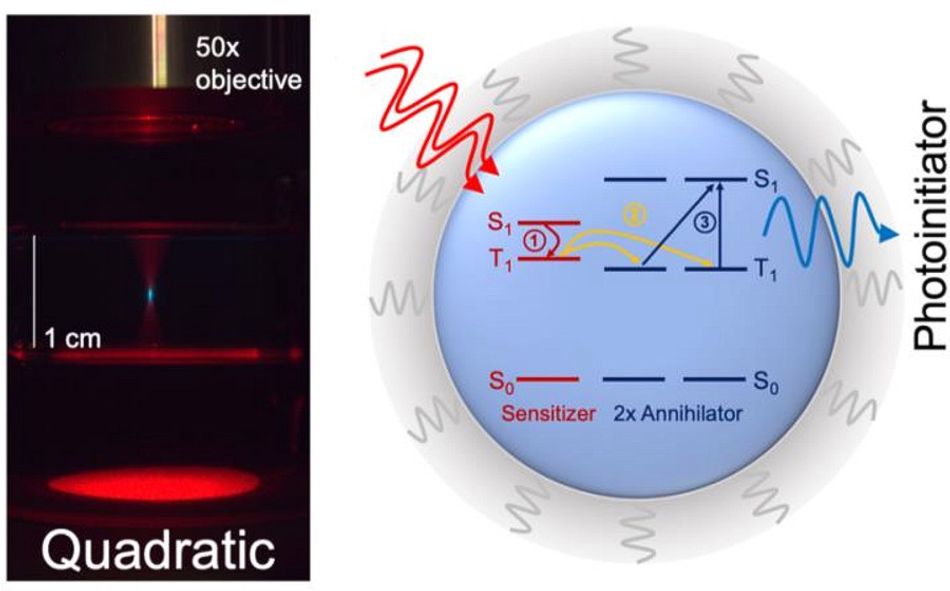 By filling resin with upconversion nanocapsules, seen to the right, a team of engineers is able to create a single point of light within a static vat of 3D printing resin, left.

“I got interested in this upconversion technique back in grad school,” explains Stanford assistant professor Dan Congreve of the work, on which he is corresponding author. “It has all sorts of interesting applications in solar, bio, and now this 3D printing. Our real specialty is in the nanomaterials themselves — engineering them to emit the right wavelength of light, to emit it efficiently, and to be dispersed in resin.”

The process itself has three key stages: Two low-energy photons generate two singlet excitons on the sensitizer molecules, causing intersystem crossing and generating triplet excitons; the excitons then triplet energy transfer to the annihilator and undergo triplet fusion; the resulting higher-energy singlet radiatively decays by emitting a high-energy photon which couples to the photoinitiator, producing the blue light required to harden the resin at the target spot — and only the target spot.

To get the system working, the team engineered sensitizer and annihilator pairs offering a range of upconversion threshold values, deploying them in the resin as encapsulated nanodroplets in order to prevent instability as the two materials mixed. The resulting nanoencapsulation system is, the team claims, “inherently modular with regard to the capsule contents and solution-state compatibility” — opening the door for the technology’s application beyond 3D printing in the future.

Once introduced to a 3D printing resin made from common commercial materials, with added hydrophilic fused silica as a thickener, the team was able to beam a low-power laser into the solution to target individual “voxels” — volumetric pixels — at any point. As the viscous resin was more than capable of supporting the hardened voxels, the printing process requires no support layers.

Two printers were created to demonstrate the approach: one, to the left and center, using a high-speed parallel approach and the other printing objects voxel-by-voxel.

To prove the concept, the team printed “Benchy,” a 3D boat model commonly used as a benchmark for commercial and prototype 3D printing systems. With the printer configured for monovoxel operation — printing each individual voxel one at a time, rather than using a parallel approach — the team successfully reproduced Benchy with no support structures in two hours, using nearly half the resin of a traditional supported print and with fewer surface blemishes and less post-processing required.

As a demonstration of the technique’s potential for high-speed printing, meanwhile, the team printed small-scale high-detail gear and logo objects using a parallel excitation approach driven by an LED light source patterned using a digital micromirror device (DMD) printer — completing the prints in just eight minutes and with feature sizes as small as 50µm.

The team's approach is ideally suited to high-detail small-scale objects, as demonstrated by these two test prints measuring around 5mm in width and requiring no post-processing beyond washing off the uncured resin.

“This technique,” the engineers claim, “enables printing in resins that cannot be printed in a traditional SLA 3D printing setup, such as resins with high viscosity, resins requiring air-free polymerization techniques, or prints with soft or flexible parts. Moving forward, optical engineering of projection-based systems to achieve high numerical aperture over large field of view will allow access to increasingly complex 3D prints at 100,000s of [voxels] at a time using continuous wave, low energy lasers; 3D printing without steps between layers.”

The team’s work has been published under closed-access terms in the journal Nature; a preprint is available on Cornell’s arXiv.org server.