Researchers have developed a novel way to increase fuel-cell efficiency and lifespan, using a recirculation fan driven by a steam turbine that runs on steam-lubricated bearings.

Solid oxide fuel cells, or SOFCs, are devices that produce both electricity and heat by oxidizing a fuel such as natural gas or biogas. This energy-efficient, zero-emission technology has the potential to meet domestic and commercial power, heating and hot water needs.

While uptake is high in countries like Japan, SOFCs have yet to catch on in Europe, not least because steep production costs pose a barrier to manufacturing the cells at scale. But new research by a team at EPFL could prove to be a game changer.

Engineers at the Laboratory for Applied Mechanical Design (LAMD), based at Microcity in Neuchâtel, have devised a novel way to improve the efficiency of domestic SOFCs, i.e. cells rated at 6 kWe (kilowatt-electric). The steam turbine-driven fan, which recirculates gases through the system, also increases cell lifespan. This collaborative project involved three partners: the LAMD, the Group of Energy Materials (GEM) based at the EPFL Valais Wallis campus in Sion and headed by Jan Van Herle, and SOLIDpower SA, a private firm located in Yverdon-les-Bains. A paper detailing the research has been published in the journal Applied Energy. The researchers achieved these efficiency and lifespan gains using a novel system called an anode off-gas recirculation fan. Under normal conditions, SOFCs only convert around 80–85% of input fuel, which only transits the cell once. By connecting the outlet to the inlet, the team was able to recirculate the gases through the cell a second time. Because SOFCs operate at temperatures exceeding 600°C, “the recirculation fan raises the pressure of the outlet gases, bringing it to a level compatible with the pressure inside the cell,” says Patrick Wagner, the paper’s lead author.

With the new system, the team observed impressive efficiency gains of as much as 10%. “When we coupled the fan to a domestic-rated fuel cell running at part load, or 4.5 kWe, we achieved gross efficiencies of 66%,” says Jürg Schiffmann, who heads the LAMD. By comparison, the most advanced power plants achieve efficiencies of 63% without generating recoverable heat. Moreover, these plants operate at capacity ranges in the hundreds of megawatts-electric, or MWe. In Switzerland, around 6% of that energy is lost between grid feed-in and withdrawal. 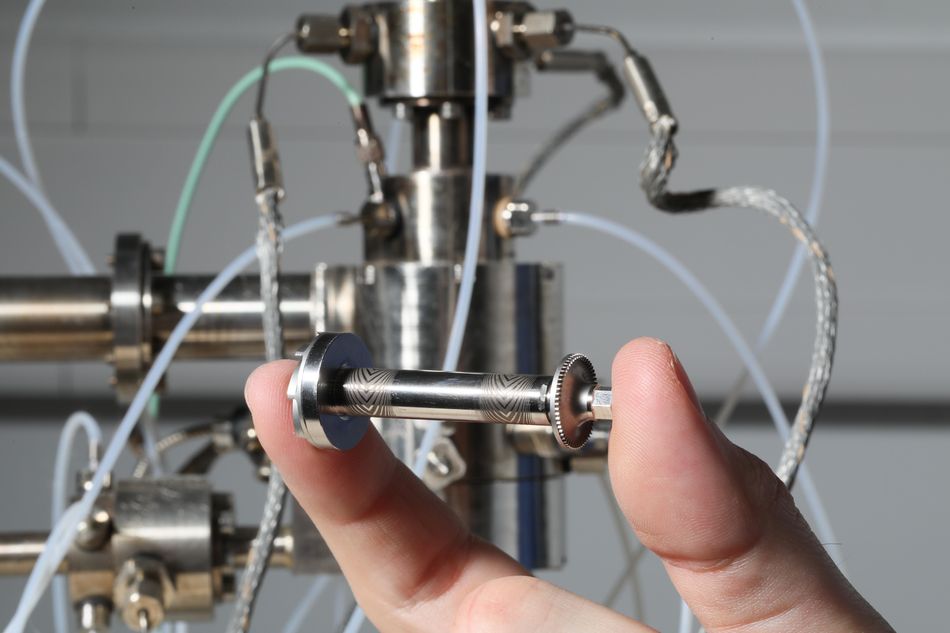 Gas recirculation may not be a new concept in itself, but the team’s design marks a clean break with previous systems. The fan is equipped with steam-lubricated bearings developed at the LAMD and is driven by a miniature steam turbine that runs on the heat produced by the cell.

The researchers opted for steam-lubricated bearings to avoid the risk of contamination. “SOFCs, like almost all catalytic devices, are extremely delicate,” says Wagner. “If oil or another lubricant finds its way inside, it can cause real problems. Steam-lubricated bearings are mechanical parts that don’t require any oil. The rotating part of the system sits on a cushion of air generated by the shaft – another part of the system – as it spins.” This design has another benefit: other than during startup and shutdown, none of the parts come into contact with one another, which means they don’t wear.

The team used a steam turbine because SOFC outlet gases contain hydrogen and other potentially explosive compounds in the residual fuel. “Our recirculation fan is made solely of mechanical parts, so it poses absolutely no safety risk,” adds Wagner. “That wouldn’t have been the case if we’d used an electric motor.” The 34-Watt turbine is ideally suited for domestic-rated SOFCs. Measuring just 15 mm in diameter, it is one of the smallest steam turbines in the world.

A patent application has been filed for the new system, and Wagner has founded a startup, OTurb, to develop and market the technology.

EPFL launches a series of projects to combat the Coronavirus crisis