Experimental panels from the Waas lab. The hole mimics the weak point where a bolt hole might be in the body of a road vehicle or airplane. Courtesy: Composite Structures Laboratory, University of Michigan.

A computer model that finds the breaking points of composite airplane and automotive parts is being evaluated for licensing from U-M by many companies, including Boeing. It is now available through a software package widely used in automobile design in Europe.

“As a researcher, I don’t want to be working in a sandbox,” said Evan Pineda (MSE ’07 PhD ’12), an aerospace research engineer at NASA Glenn, who built the model as part of his PhD research at U-M. “To have created something other people use to solve their problems is a very good feeling.”

Often referred to as black aluminum, composites materials have a lot of advantages: they’re lightweight, high strength and easy to manufacture. This helps reduce the cost of airplanes and road vehicles while also improving fuel efficiency. They degrade more gradually than metals as well, improving a vehicle’s safety and longevity.

“The main advantage of composites is apparent toughness, which is sort of the ability to accumulate damage slowly. When a properly designed composite fails, it fails very gracefully,” said Anthony Waas, the Richard A. Auhll Department Chair of Aerospace Engineering, Felix Pawlowski Collegiate Professor, and Pineda’s PhD supervisor.

Because the manufacturing process is much more versatile than for metals, composites offer a vast design space. How do you get the lightest design that is tough enough for its job? This is the question the model helps to answer.

The model describes a major class of composites, used to make airplane wings and fuselages as well as automobile components. These structures are made from rolls of tape composed of fibers and resin. Manufacturers build a laminated panel up layer by layer and then cure the layers, with heat and sometimes pressure, so that they become an integrated structure.

But there are many ways to build that structure, placing each layer of tape at different angles. The computer model, now known in the field as the Waas-Pineda model, helps companies test out different arrangements virtually to see how well they hold up to damage and stresses before they ever build a prototype. The model is also useful for assessing the strength of the material in the presence of manufacturing features such as bolt holes, cutouts or curved sections. 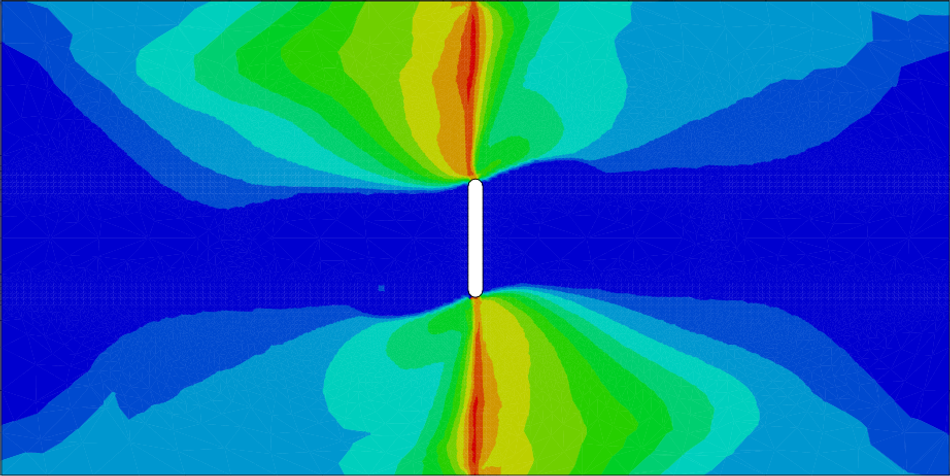 The Waas-Pineda model predicts the breaking point, but it also shows how damage accumulates around a slit in the composite.

Waas explained that for airplane design, it can cost as much as a million dollars to build and test a single structural prototype component. Meanwhile, models cost around $500,000 to make, with the funding used to support a graduate student like Pineda, and about $50,000 to license from a university. The Waas-Pineda model can test out as many versions of the part as a designer might want, finding the breaking points for multiple stresses.

At the beginning of the project, Pineda spent a summer doing experiments to get a feel for physical behavior of composite materials. He would build layers of tape into a rectangular sample, alternating the direction of the tape in each layer to create crisscrossing patterns with a particular angle between them. Then, he tested these samples in a frame that puts stresses on the panels and measures how they react.

Pineda turned the data from each sample into a mathematical function and used those curves to characterize the model. He contrasts their approach, which uses multiple data points in each simulation, with those that rely on a single data point to predict the forces required for the structure to fail.

The Waas-Pineda model’s inclusion in the industry standard Composite Materials Handbook, CMH-17, helped raise its profile. The virtual prototyping firm ESI Group, headquartered in France, is one of the most recent adopters of the model. Many ESI customers want to choose the lightest structure that can do the job, cutting vehicle emissions.

The Waas-Pineda model stands out because it can link the point at which a composite structure first fractures to the evolution of damage within the material.

“The model has been proven to give accurate results while only relying on a small number of material parameters, which can be determined directly from experimental tests,” said Sebastian Müller, Solution Management Team Leader for Pre-Certification Outcome at ESI Group.

In the large suite of models, handling everything from crash testing to how materials hold up in different environmental conditions, the Waas-Pineda model is one of eight models simulating how layered materials fail. The software package, known as the Virtual Performance Solution, is cleared to pre-certify automotive designs. Customers include GM, Ford, Renault-Nissan and the Volkswagen Group.

Waas’s group is working on a new iteration of the model, revealing the beginnings of damage earlier—when the cracks are not much wider than the micro- or nanoscale fibers themselves.

Pineda, meanwhile, has been using his skills to upgrade a multi-scale modeling tool for NASA. He says he gets a small cut of the licensing through U-M—not enough to pay the bills, but enough to know that his work continues to live on in industry.

“You do this stuff for your PhD, and you think, ‘This is never gonna go anywhere…’” Pineda recalled. But when it does, he said, “That type of validation, it’s motivating. Keeps me motivated to work the long hours.”

By design: from waste to next-gen carbon fiber

By design: from waste to next-gen carbon fiber

Millo is the company behind the Smart Worktop, an innovative kitchen table with built-in appliances with no buttons, cables or wires.