New way of fabricating aircraft wings could enable radical new designs, such as this concept, which could be more efficient for some applications. Image: Eli Gershenfeld, NASA Ames Research Center

A team of engineers has built and tested a radically new kind of airplane wing, assembled from hundreds of tiny identical pieces. The wing can change shape to control the plane’s flight, and could provide a significant boost in aircraft production, flight, and maintenance efficiency, the researchers say.

The new approach to wing construction could afford greater flexibility in the design and manufacturing of future aircraft. The new wing design was tested in a NASA wind tunnel and is described today in a paper in the journal Smart Materials and Structures, co-authored by research engineer Nicholas Cramer at NASA Ames in California; MIT alumnus Kenneth Cheung SM ’07 PhD ’12, now at NASA Ames; Benjamin Jenett, a graduate student in MIT’s Center for Bits and Atoms; and eight others.

Instead of requiring separate movable surfaces such as ailerons to control the roll and pitch of the plane, as conventional wings do, the new assembly system makes it possible to deform the whole wing, or parts of it, by incorporating a mix of stiff and flexible components in its structure. The tiny subassemblies, which are bolted together to form an open, lightweight lattice framework, are then covered with a thin layer of similar polymer material as the framework.

The result is a wing that is much lighter, and thus much more energy efficient, than those with conventional designs, whether made from metal or composites, the researchers say. Because the structure, comprising thousands of tiny triangles of matchstick-like struts, is composed mostly of empty space, it forms a mechanical “metamaterial” that combines the structural stiffness of a rubber-like polymer and the extreme lightness and low density of an aerogel. 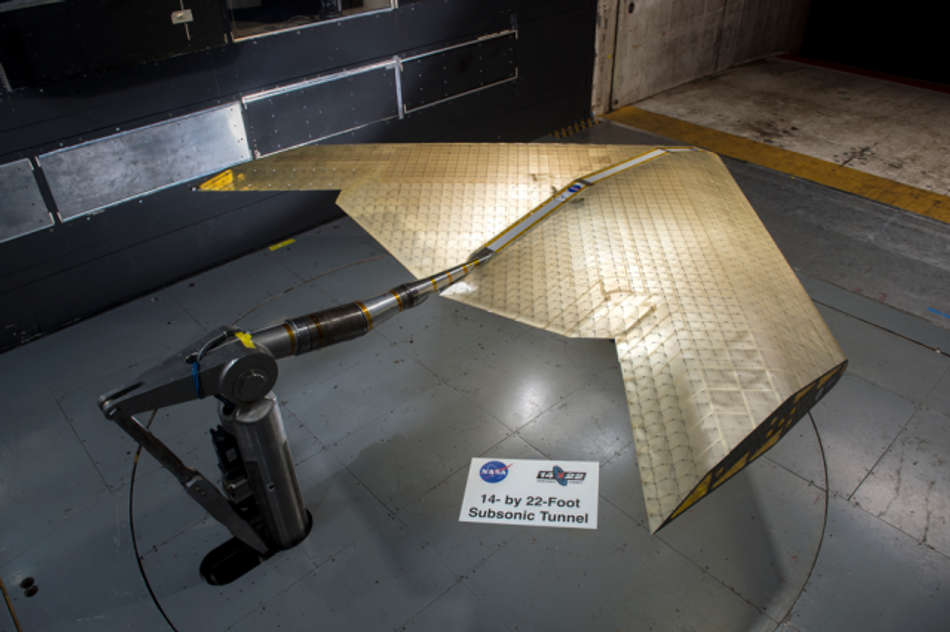 Wing assembly is seen under construction, assembled from hundreds of identical subunits. The wing was tested in a NASA wind tunnel. Image: NASA

Jenett explains that for each of the phases of a flight — takeoff and landing, cruising, maneuvering and so on — each has its own, different set of optimal wing parameters, so a conventional wing is necessarily a compromise that is not optimized for any of these, and therefore sacrifices efficiency. A wing that is constantly deformable could provide a much better approximation of the best configuration for each stage.

While it would be possible to include motors and cables to produce the forces needed to deform the wings, the team has taken this a step further and designed a system that automatically responds to changes in its aerodynamic loading conditions by shifting its shape — a sort of self-adjusting, passive wing-reconfiguration process.

“We’re able to gain efficiency by matching the shape to the loads at different angles of attack,” says Cramer, the paper’s lead author. “We’re able to produce the exact same behavior you would do actively, but we did it passively.”

This is all accomplished by the careful design of the relative positions of struts with different amounts of flexibility or stiffness, designed so that the wing, or sections of it, bend in specific ways in response to particular kinds of stresses.

Cheung and others demonstrated the basic underlying principle a few years ago, producing a wing about a meter long, comparable to the size of typical remote-controlled model aircraft. The new version, about five times as long, is comparable in size to the wing of a real single-seater plane and could be easy to manufacture. 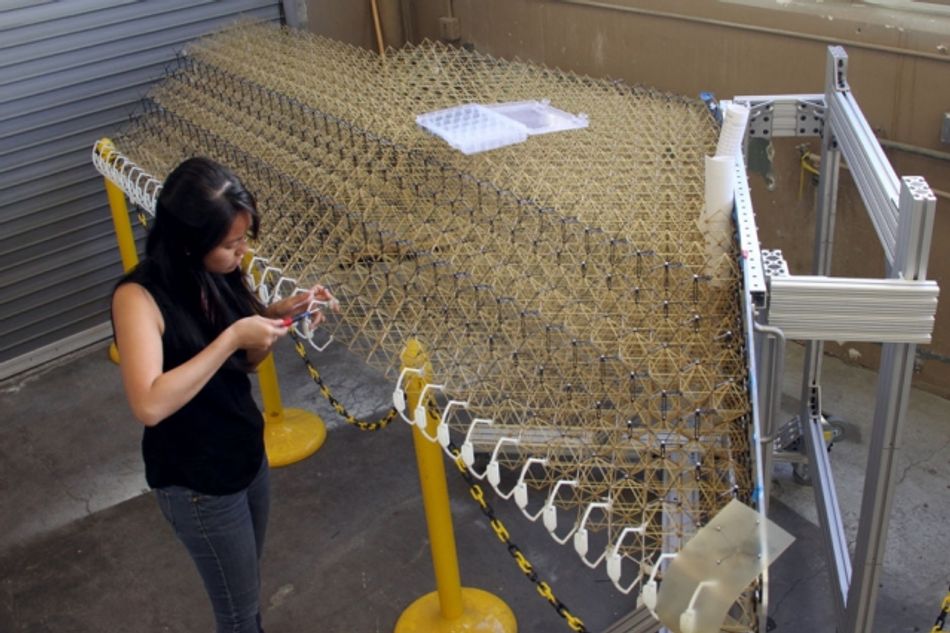 While this version was hand-assembled by a team of graduate students, the repetitive process is designed to be easily accomplished by a swarm of small, simple autonomous assembly robots. The design and testing of the robotic assembly system is the subject of an upcoming paper, Jenett says.

The individual parts for the previous wing were cut using a waterjet system, and it took several minutes to make each part, Jenett says. The new system uses injection molding with polyethylene resin in a complex 3-D mold, and produces each part — essentially a hollow cube made up of matchstick-size struts along each edge — in just 17 seconds, he says, which brings it a long way closer to scalable production levels.

“Now we have a manufacturing method,” he says. While there’s an upfront investment in tooling, once that’s done, “the parts are cheap,” he says. “We have boxes and boxes of them, all the same.”

Because the overall configuration of the wing or other structure is built up from tiny subunits, it really doesn’t matter what the shape is. “You can make any geometry you want,” he says. “The fact that most aircraft are the same shape” — essentially a tube with wings — “is because of expense. It’s not always the most efficient shape.” But massive investments in design, tooling, and production processes make it easier to stay with long-established configurations.

Studies have shown that an integrated body and wing structure could be far more efficient for many applications, he says, and with this system those could be easily built, tested, modified, and retested. 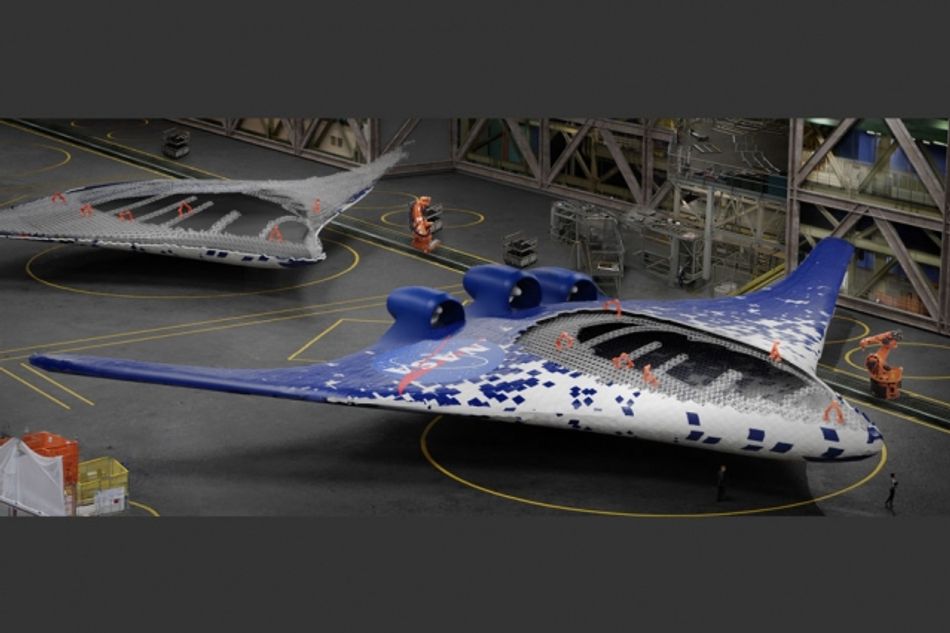 "The research shows promise for reducing cost and increasing the performance for large, light weight, stiff structures," says Daniel Campbell, a structures researcher at Aurora Flight Sciences, a Boeing company, who was not involved in this research. "Most promising near-term applications are structural applications for airships and space-based structures, such as antennas."

The new wing was designed to be as large as could be accommodated in NASA’s high-speed wind tunnel at Langley Research Center, where it performed even a bit better than predicted, Jenett says.

The same system could be used to make other structures as well, Jenett says, including the wing-like blades of wind turbines, where the ability to do on-site assembly could avoid the problems of transporting ever-longer blades. Similar assemblies are being developed to build space structures, and could eventually be useful for bridges and other high performance structures.