A new process developed at Caltech makes it possible for the first time to manufacture large quantities of materials whose structure is designed at a nanometer scale—the size of DNA's double helix.

Pioneered by Caltech materials scientist Julia R. Greer, "nanoarchitected materials" exhibit unusual, often surprising properties—for example, exceptionally lightweight ceramics that spring back to their original shape, like a sponge, after being compressed. These properties could be desirable for applications ranging from ultrasensitive tactile sensors to advanced batteries, but so far, engineers have only been able to create them in very limited amounts. To create a material whose structure is designed at such a small scale, they often have to be assembled nano-layer by nano-layer in a 3-D printing process that uses a high-precision laser and custom-synthesized chemicals. That painstaking process limits the overall amount of material that can be built.

Now, a team of engineers at Caltech and ETH Zurich have developed a material that is designed at the nanoscale but assembles itself—with no need for the precision laser assembly. For the first time, they were able to create a sample of nanoarchitected material at the cubic-centimeter scale.

"We couldn't 3-D print this much nanoarchitected material even in a month; instead we're able to grow it in a matter of hours," says Carlos Portela, postdoctoral scholar at Caltech and lead author of a study on the new process that was published by the journal Proceedings of the National Academy of Sciences (PNAS) on March 2.

At the nanoscale, the material looks like a sponge but is actually an assembly of interconnected curved shells. That's the key to the material's high stiffness- and strength-to-weight ratios: the smoothly curved thin shells, like those of an egg, are free of corners or junctions, which are usually weak points leading to failure in other similar materials. This provides unique mechanical benefits with a minimum of material actually used. In testing, a sample of the material was able to achieve strength-to-density ratios comparable to some forms of steel, while thinner-walled configurations exhibit negligible damage and recovery after repeated compression.

"This new fabrication route, supported by the experimental and numerical analysis that we've conducted, gets us one step closer to being able to produce nanoarchitected materials at a useful scale, with a marked ease of fabrication," says Greer, the Ruben F. and Donna Mettler Professor of Materials Science, Mechanics, and Medical Engineering and coauthor of the PNAS paper. 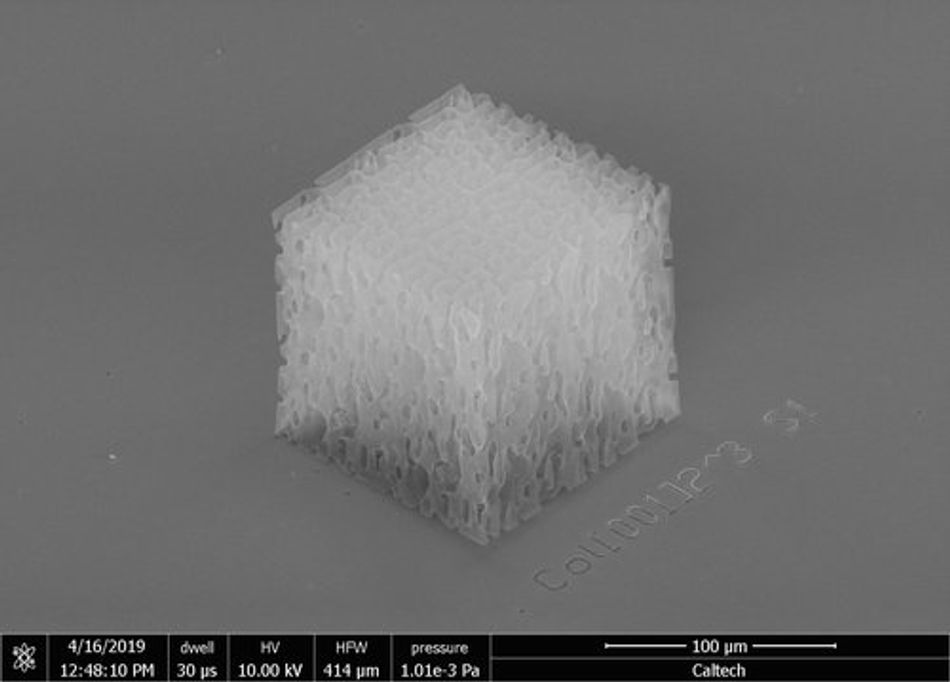 Though it is measurably more resilient than virtually all nanoarchitected materials with similar densities synthesized by the Greer group, what makes these so-called nano-labyrinthine materials particularly special is that they assemble themselves. This achievement, led by Caltech graduate student Daryl Yee, works like this: two materials that don't dissolve into each other are mixed together, blending them to create a disordered state. Heating up the mixture polymerizes the materials so that the current geometry gets locked in place. One of the two materials is then removed, leaving nanoscale shells. The resulting porous template is subsequently coated, and then the second polymer is removed. What's left is lightweight nano-shell network.

The process requires extreme precision; if incorrectly heated, the microstructure will either melt together or collapse and will not lead to interconnected shells. But for the first time, the team sees the potential to scale up nanoarchitecture.

"It is exciting to see our computationally designed optimal nanoscale architectures being realized experimentally in the lab," says Dennis M. Kochmann, corresponding author of the PNAS paper and professor of mechanics and materials at ETH Zurich and a visiting associate in aerospace at Caltech. His team, including former Caltech graduate student A. Vidyasagar and Sebastian Krödel and Tamara Weissenbach of ETH Zurich, predicted the versatile properties of the nano-labyrinthine materials through theory and simulations.

Next, the team plans to expand the tunability and versatility of the process by exploring pathways to carefully control the microstructure, expand on the material options for the nano-shells, and push for the production of larger volumes of the material.

Everything you need to know about how silicone additive manufacturing works, its benefits, applications, and more.

Czinger - a boutique automotive company based in California - beat the record at Laguna Seca which was previously held by the Mclaren Senna.