The material has potential applications as a smart fabric for exoskeletons, or as an adaptive cast that adjusts its stiffness as an injury heals, or even as a deployable bridge that could be unrolled and stiffened, according to Chiara Daraio, Caltech's G. Bradford Jones Professor of Mechanical Engineering and Applied Physics and corresponding author of a study describing the material that was published in Nature on August 11.

"We wanted to make materials that can change stiffness on command," Daraio says. "We'd like to create a fabric that goes from soft and foldable to rigid and load-bearing in a controllable way." An example from popular culture would be Batman's cape from the 2005 movie Batman Begins, which is generally flexible but can be made rigid at will when the Caped Crusader needs it as a gliding surface.

Materials that change properties in similar ways already exist all around us, Daraio notes. "Think about coffee in a vacuum-sealed bag. When still packed, it is solid, via a process we call 'jamming.' But as soon as you open the package, the coffee grounds are no longer jammed against each other and you can pour them as though they were a fluid," she says.

Individual coffee grounds and sand particles have complex but disconnected shapes, and can only jam when compressed. Sheets of linked rings, however, can jam together under both compression and tension (when pushed together or pulled apart). "That's the key," Daraio says. "We tested a number of particles to see which ones offered both flexibility and tunable stiffness, and the ones that only jam under one type of stress tended to perform poorly." 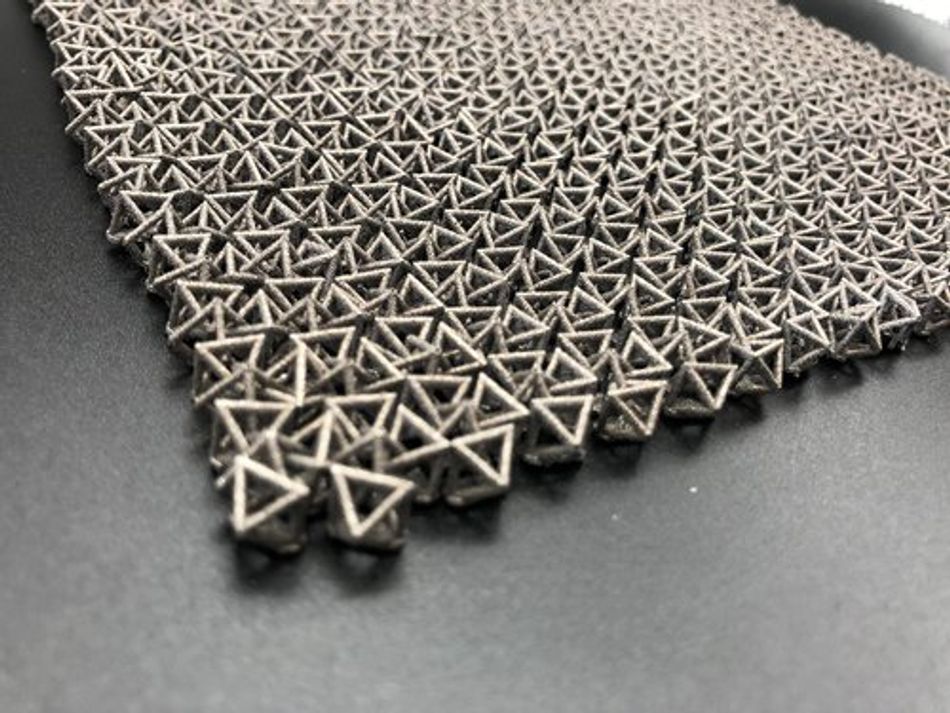 A material made from linked octahedrons.

To explore what materials would work best, Daraio, together with former Caltech postdoctoral researcher Yifan Wang and former Caltech graduate student Liuchi Li (PhD '19) as co-lead authors of the Nature paper, designed a number of configurations of linked particles, from linking rings to linking cubes to linking octahedrons (which resemble two pyramids connected at the base). The materials were 3-D printed out of polymers and even metals, with help from Douglas Hofmann, principal scientist at JPL, which Caltech manages for NASA. These configurations were then simulated in a computer with a model from the group of José E. Andrade, the George W. Housner Professor of Civil and Mechanical Engineering and Caltech's resident expert in the modeling of granular materials.

"Granular materials are a beautiful example of complex systems, where simple interactions at a grain scale can lead to complex behavior structurally. In this chain mail application, the ability to carry tensile loads at the grain scale is game changer. It's like having a string that can carry compressive loads. The ability to simulate such complex behavior opens the door to extraordinary structural design and performance," says Andrade.

The engineers applied an outside stress, compressing the fabrics using a vacuum chamber or by dropping a weight to control the jamming of the material. In one experiment, a vacuum-locked chain mail fabric was able to support a load of 1.5 kilograms, more than 50 times the fabrics' own weight. The fabrics that showed the largest variations in mechanical properties (from flexible to stiff) were those with larger average number of contacts between particles, such as linked rings and squares, akin to medieval chain mail.

Testing the impact resistance of the material when unjammed (soft).

Testing the impact resistance of the material when jammed (rigid).

"These fabrics have potential applications in smart wearable equipment: when unjammed, they are lightweight, compliant, and comfortable to wear; after the jamming transition, they become a supportive and protective layer on the wearer's body," says Wang, now an assistant professor at Nanyang Technological University in Singapore.

In the example of a bridge that could be unrolled and then driven across, Daraio envisions running cables through the material that then tighten to jam the particles. "Think of these cables like the drawstrings on a hoodie," she says, noting that she is now exploring this cable scheme and other possibilities. 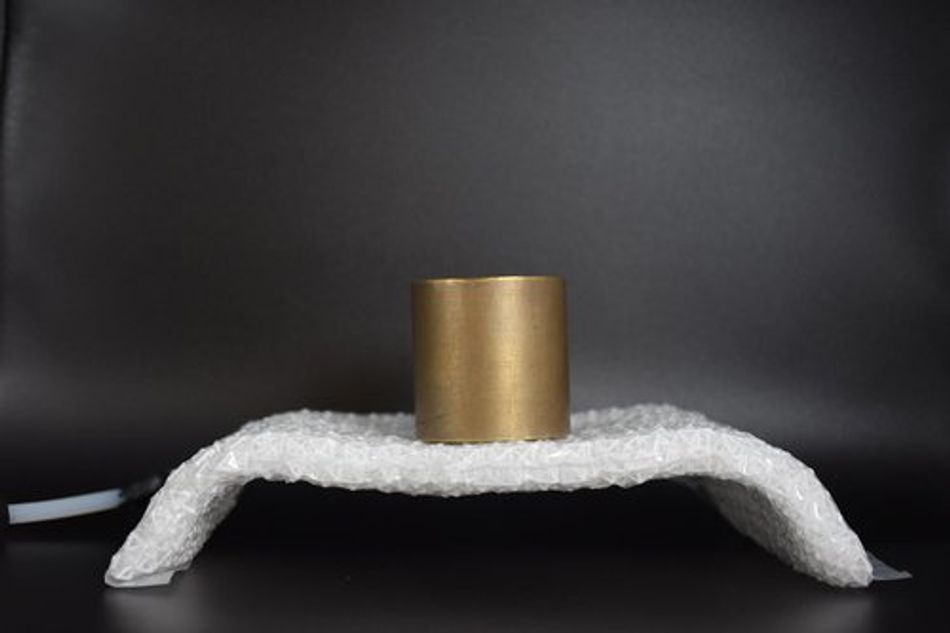 When stiffened, the material has the potential to act as a sturdy bridge.

In parallel work on so-called smart surfaces, which are surfaces can change shapes to specific configurations at will, Daraio, together with postdoctoral scholar Ke Liu and visiting student Felix Hacker, recently demonstrated a method for controlling the shape of a surface by embedding networks of heat-responsive liquid crystal elastomers (LCEs), thin strips of polymer that shrink when heated. These LCEs contain stretchable heating coils that can be charged with electrical current, which heats them up and causes them to contract. As the LCEs contracted, they tugged at the flexible material into which they were embedded and compressed it into a predesigned solid shape.

That work, which was published on April 7 in the journal Science Robotics, could be useful for remote collaboration where a physical component of the collaboration is necessary, medical devices, and haptics (which use technology to simulate physical sensation for virtual reality). Next, the team plans to miniaturize and optimize the design of both structured fabrics and smart systems to get them closer to practical applications.

The Nature paper is titled "Structured fabrics with tunable mechanical properties." The research was supported by the Foster and Coco Stanback Space Innovation Fund at Caltech, Facebook, and the Army Research Office.

In recent years there have been exciting breakthroughs in wearable technologies, like smartwatches that can monitor your breathing and blood oxygen levels.

After each season, clothing retailers offer deep discounts to lure in consumers to buy leftover, unsold products. But what if they could do a better job predicting what consumers will want, in what size and in the right quantity to increase profits, and reduce textile waste?