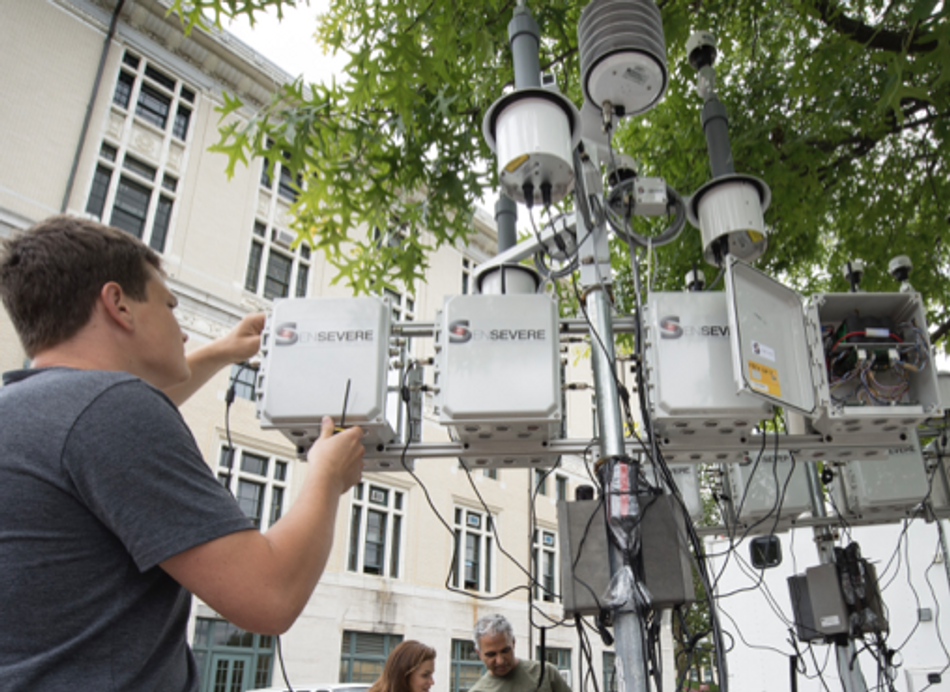 Sensors on the ground in Pittsburgh. Source: College of Engineering

In our increasingly industrial globe, air pollution is causing a public health crisis. Unfortunately, places with the least amount of resources to put toward this find pollution-related deaths increasing the most. With the help of affordable technology, these places could more effectively fight the crisis.

A team of researchers from Carnegie Mellon University, Columbia University, and Washington University-St. Louis are creating an international network of low-cost sensors to track and fight air pollution. The National Science Foundation awarded partner grants to each institution for this project. CMU’s team includes principal investigator Albert Presto, an associate research professor of mechanical engineering, and co-principal investigator Paulina Jaramillo, a professor of engineering and public policy and co-director of the Green Design Institute.

One of the major benefits of low-cost sensors is that they’re, well, low-cost. These sensors will provide publicly available, high-quality data about air pollution, allowing many communities to gain access to information about the air around them. The main way pollution is mitigated is by management from policymakers. However, without high-quality real-time data, the policymakers don’t have a lot to go off of.

“Low-cost sensors are being deployed all over the world,” the authors wrote. “They have the potential to revolutionize clean air solutions and spur regulatory action, especially in lower- and middle-income countries.”

Presto has already deployed many of these sensors in CMU’s home city, Pittsburgh. He measures pollution at various locations across the city to find fluctuations in pollution levels. These small differences indicate where air pollution is coming from. For example, air pollution is higher near major roads, indicating increased automobile emissions.

Right now, there is no scientific standard regarding low-cost sensors and the data they collect. By teaming up with people all over the world, researchers can share ideas and results to make everyone’s data analysis more robust. The team proposes The Clean Air Monitoring and Solutions Network (CAMS-Net)—an international interdisciplinary team that will include 32 teams from North America, Europe, Africa, and India. Together, researchers plan to revolutionize the way air pollution data is taken and analyzed.