During more than 90 approaches to Zurich Airport conducted under the leadership of the Swiss SkyLab Foundation, researchers from Empa and the German Aerospace Center (DLR) tested an assistance system that supports pilots via a display during quiet and, at the same time, fuel-efficient approaches. The results show a measurable reduction in noise emissions and fuel consumption. Now the system, developed by DLR, is to be made ready for production.

Approach and landing are among the most labour-intensive flight phases. Pilots have to manage airspeed, altitude, engine thrust, and the deployment of flaps, airbrakes and landing gear. At the same time, they must react to changing wind conditions, the presence of other aircraft and instructions from air traffic controllers. A similar principle applies here as it does for drivers on the road – anticipatory driving allows fuel savings. Predictive flying also reduces noise emissions. The German Aerospace Center (Deutsches Zentrum für Luft- und Raumfahrt; DLR) has developed an assistance system for continuous descent that, via a display in the flight deck, advises pilots on courses of action for an environmentally friendly landing approach. The Low Noise Augmentation System (LNAS) calculates the optimum altitude, sink rate, airspeed and configuration of the aircraft, and dynamically adjusts the recommendations during the approach. In September 2019, more than 90 test approaches were made to Zurich Airport's Runway 14 with the LNAS assistance system installed on board DLR's A320 ATRA (Advanced Technology Research Aircraft). Seventy comparable approaches were analysed in the evaluation. The Swiss Federal Laboratories for Materials Science and Technology (Eidgenössische Materialprüfungs- und Forschungsanstalt; Empa) tested the effectiveness of the system with a series of noise measurements along the approach route. The results are now available and have been submitted to the Swiss Federal Office of Civil Aviation (FOCA). 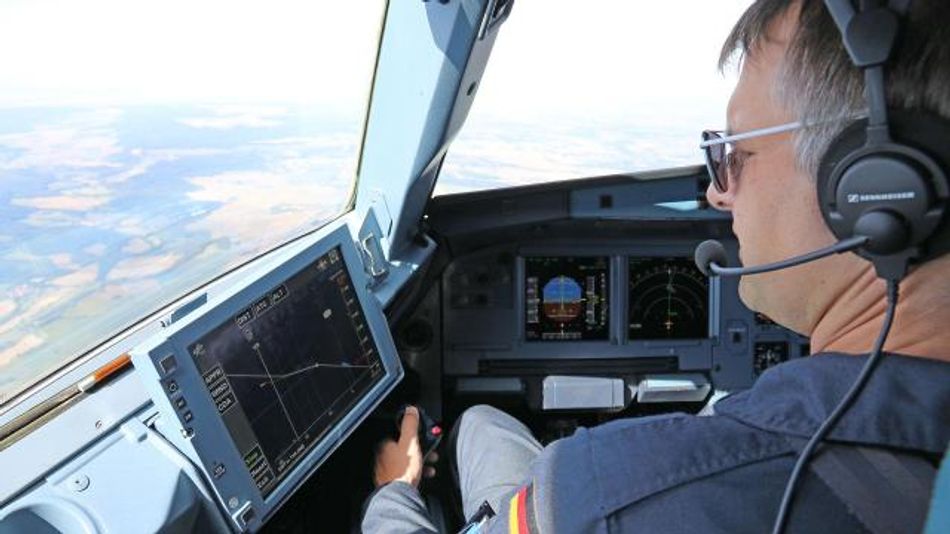 Maximum precision during approach – a competition between pilot and computer

For the flight tests, 23 pilots from the airlines Swiss, Edelweiss and Lufthansa were divided into two groups. Fourteen pilots used the LNAS assistance system and were shown the best times for extending the flaps and landing gear, thus completing an approach optimised for low noise and fuel consumption. The other nine attempted to fly as quietly and fuel-efficiently as possible without LNAS computer support. On each approach, the aircraft was flown by one of the participating airline pilots, with a DLR test pilot acting as co-pilot. Each of the 70 approaches considered began at 7000 feet (2100 metres above sea level) and 220 knots (approximately 400 kilometres per hour). Forty-three approaches were flown using LNAS and 27 without LNAS. The A320 ATRA was stationed at and operated from Dübendorf Air Base, where scientific research campaigns are regularly conducted.

The flight data evaluated by DLR shows that the pilots using LNAS flew the descent much more uniformly and precisely than the colleagues flying without the assistance system. The changes in airspeed were also significantly smoother when using LNAS. The use of noise-intensive airbrakes was completely eliminated on approaches with LNAS. 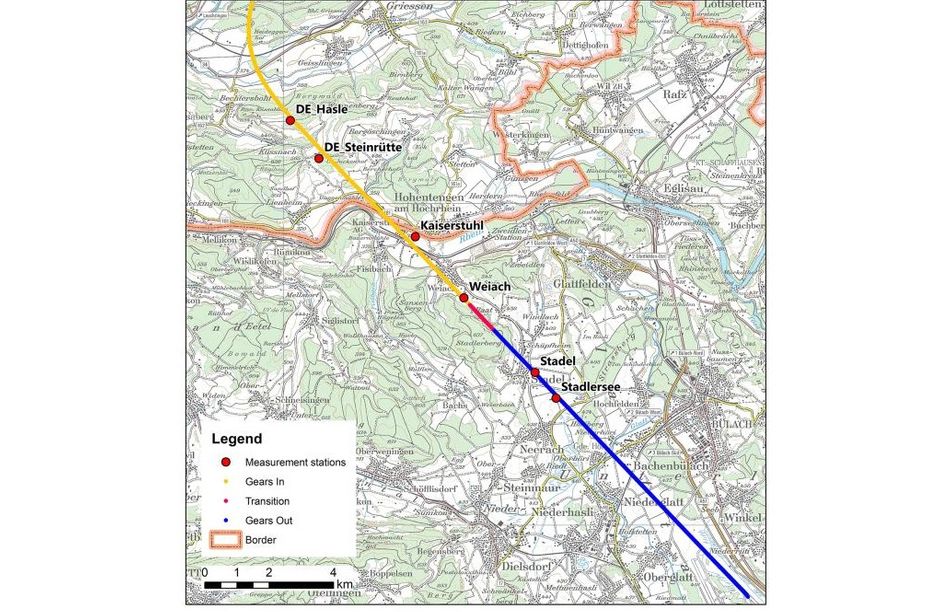 The central focus of the LNAS assistance system is the reduction of acoustic outliers, which contribute disproportionately to noise pollution. Some particularly loud approaches are especially annoying for those residing near the flightpath. Using LNAS, it was possible to avoid these outliers and thus make even the loudest approaches up to three decibels quieter, which corresponds to a reduction of the perceived volume by approximately one third.

Subsequently, the approaches were simulated with the Empa sonAIR aircraft noise model using the flight and meteorological parameters in order to be able to draw conclusions even in areas where no measurement stations could be set up. The noise maps calculated using sonAIR confirm the experimental results and show an additional reduction potential in the southern Black Forest, approximately 24 kilometres from the runway threshold, with a significant average noise level reduction of up to three decibels. 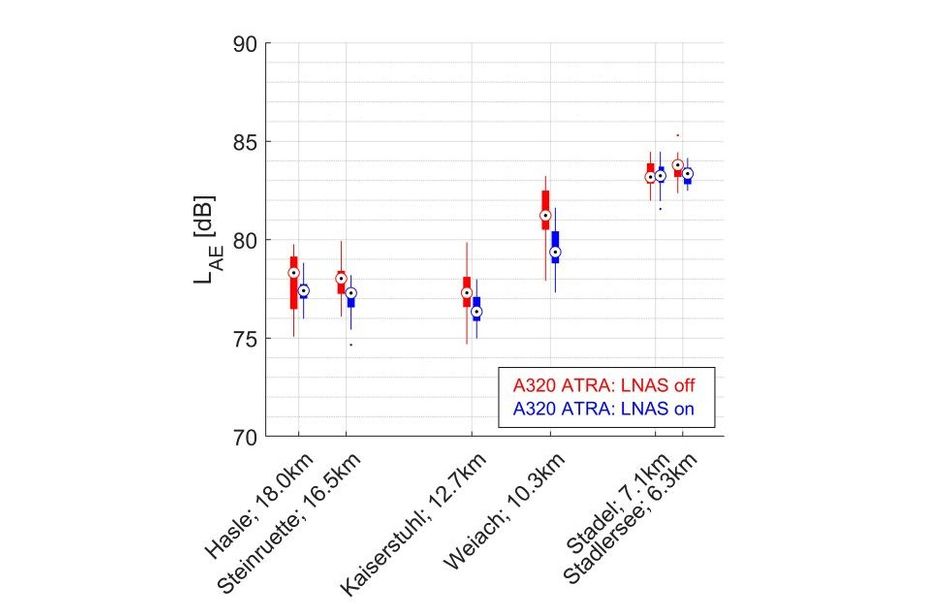 By comparing the approaches performed by the two groups of pilots, the researchers also determined the average fuel savings that can be achieved with LNAS. During the last 50 kilometres before the runway, the pilots with LNAS needed an average of 8.9 kilograms less kerosene than those flying without LNAS. Extrapolated to all Swiss A320 flights (flight movements in 2017), LNAS could thus save around 500 tonnes of kerosene per year. Since the assistance system can be used at cruising altitude, that is, from 200218 kilometres before the runway, the potential for savings is even greater. Conservatively calculated, the annual savings amount to 3000 tonnes of kerosene, which corresponds to about 9000 tonnes of carbon dioxide, even if only the Swiss A320 fleet were to be equipped with LNAS.

The delivery of the final report to FOCA marks the conclusion of a three-year research project involving the Swiss SkyLab Foundation, Empa and DLR. During the five-day test flight campaign, the Swiss Air Force made its Dübendorf Air Base available for the stationing of DLR's ATRA research aircraft. Skyguide provided advice and assistance during the development phase and enabled the large number of approaches to be conducted. Zurich airport made it possible to carry out noise measurements outside Switzerland. 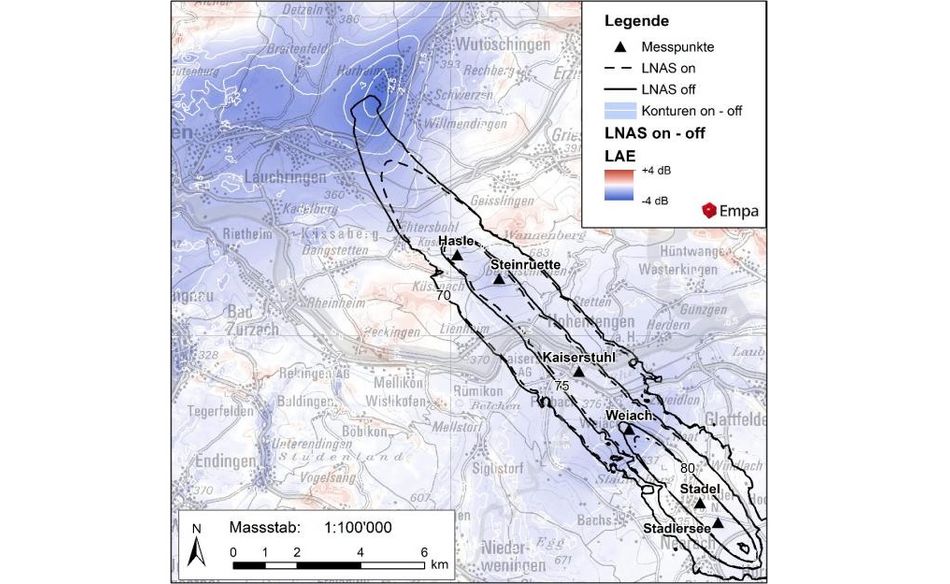 The project is funded by the Swiss Federal Office of Civil Aviation through special funding for air transport (in accordance with Art. 87b BV: Order on the application of the earmarked mineral oil tax for air transport measures to limit the impact of aviation on the environment), the Office of Transport at the Canton of Zurich Department for Economic Affairs, the Swiss Federal Office for the Environment (FOEN), and financial resources made available by the project partners themselves.

From July 2020, DLR will coordinate the launch of the advanced research project DYNCAT (Dynamic Configuration Adjustment in the TMA), in which Swiss and the electronics group Thales Avionics will participate in addition to the existing research partners. The aim of the research, which is being funded under the European programmes Horizon 2020 and SESAR (Single European Sky ATM Research), is to integrate the capabilities of the LNAS assistance system developed by DLR into the central navigation computers of commercial aircraft. This would enable noise and fuel-consumption-optimised landing approaches to be introduced on board many existing commercial aircraft.