Fiber optics couple laser light directly into the ion-trap chip. When in use, the chip is cooled to cryogenic temperatures in a vacuum chamber, and waveguides on the chip deliver the light to an ion trapped right above the chip's surface for performing quantum computation. Credits:Image courtesy of the researchers.

Walk into a quantum lab where scientists trap ions, and you'll find benchtops full of mirrors and lenses, all focusing lasers to hit an ion “trapped” in place above a chip. By using lasers to control ions, scientists have learned to harness ions as quantum bits, or qubits, the basic unit of data in a quantum computer. But this laser setup is holding research back — making it difficult to experiment with more than a few ions and to take these systems out of the lab for real use.

Now, MIT Lincoln Laboratory researchers have developed a compact way to deliver laser light to trapped ions. In a recent paper published in Nature, the researchers describe a fiber-optic block that plugs into the ion-trap chip, coupling light to optical waveguides fabricated in the chip itself. Through these waveguides, multiple wavelengths of light can be routed through the chip and released to hit the ions above it.

“It's clear to many people in the field that the conventional approach, using free-space optics such as mirrors and lenses, will only go so far,” says Jeremy Sage, an author on the paper and senior staff in Lincoln Laboratory's Quantum Information and Integrated Nanosystems Group. “If the light instead is brought onto the chip, it can be directed around to the many locations where it needs to be. The integrated delivery of many wavelengths may lead to a very scalable and portable platform. We're showing for the first time that it can be done.”

Computing with trapped ions requires precisely controlling each ion independently. Free-space optics have worked well when controlling a few ions in a short one-dimensional chain. But hitting a single ion among a larger or two-dimensional cluster, without hitting its neighbors, is extremely difficult. When imagining a practical quantum computer requiring thousands of ions, this task of laser control seems impractical.

That looming problem led researchers to find another way. In 2016, Lincoln Laboratory and MIT researchers demonstrated a new chip with built-in optics. They focused a red laser onto the chip, where waveguides on the chip routed the light to a grating coupler, a kind of rumble strip to stop the light and direct it up to the ion.

This animation of measured laser beam profiles shows laser light at four wavelengths being emitted by "grating couplers" in the ion-trap chip. The yellow surface is the metal electrode layer on the top of the chip that traps the ions above it.

Red light is crucial for doing a fundamental operation called a quantum gate, which the team performed in that first demonstration. But up to six different-colored lasers are needed to do everything required for quantum computation: prepare the ion, cool it down, read out its energy state, and perform quantum gates. With this latest chip, the team has extended their proof of principle to the rest of these required wavelengths, from violet to the near-infrared.

“With these wavelengths, we were able to perform the fundamental set of operations that you need to be able to control trapped ions,” says John Chiaverini, also an author on the paper. The one operation they didn't perform, a two-qubit gate, was demonstrated by a team at ETH Zürich by using a chip similar to the 2016 work, and is described in a paper in the same Nature issue. “This work, paired together with ours, shows that you have all the things you need to start building larger trapped-ion arrays,” Chiaverini adds.

To make the leap from one to multiple wavelengths, the team engineered a method to bond a fiber-optic block directly to the side of the chip. The block consists of four optical fibers, each one specific to a certain range of wavelengths. These fibers line up with a corresponding waveguide patterned directly onto the chip.

“Getting the fiber block array aligned to the waveguides on the chip and applying the epoxy felt like performing surgery. It was a very delicate process. We had about half a micron of tolerance and it needed to survive cooldown to 4 kelvins,” says Robert Niffenegger, who led the experiments and is first author on the paper.

On top of the waveguides sits a layer of glass. On top of the glass are metal electrodes, which produce electric fields that hold the ion in place; holes are cut out of the metal over the grating couplers where the light is released. The entire device was fabricated in the Microelectronics Laboratory at Lincoln Laboratory.

Designing waveguides that could deliver the light to the ions with low loss, avoiding absorption or scattering, was a challenge, as loss tends to increase with bluer wavelengths. “It was a process of developing materials, patterning the waveguides, testing them, measuring performance, and trying again. We also had to make sure the materials of the waveguides worked not only with the necessary wavelengths of light, but also that they didn't interfere with the metal electrodes that trap the ion,” Sage says. 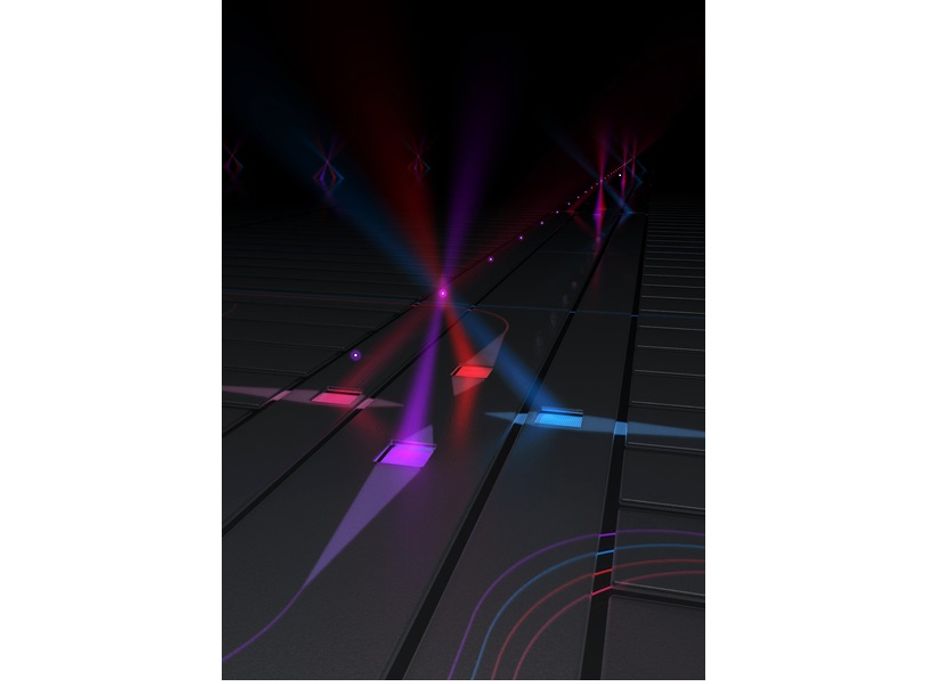 ﻿In the future, the team will aim to build ion-trap arrays, as depicted in this illustration, to explore the feasibility of developing practical quantum computers based on this technology. Credits:Image courtesy of the researchers.

The team is now looking forward to what they can do with this fully light-integrated chip. For one, “make more,” Niffenegger says. “Tiling these chips into an array could bring together many more ions, each able to be controlled precisely, opening the door to more powerful quantum computers.”

Daniel Slichter, a physicist at the National Institute of Standards and Technology who was not involved in this research, says, “This readily scalable technology will enable complex systems with many laser beams for parallel operations, all automatically aligned and robust to vibrations and environmental conditions, and will in my view be crucial for realizing trapped ion quantum processors with thousands of qubits.”

An advantage of this laser-integrated chip is that it's inherently resistant to vibrations. With external lasers, any vibration to the laser would cause it to miss the ion, as would any vibrations to the chip. Now that the laser beams and chip are coupled together, the effects of vibrations are effectively nullified.

This stability is important for the ions to sustain “coherence,” or to operate as qubits long enough to compute with them. It's also important if trapped-ion sensors are to become portable. Atomic clocks, for example, that are based on trapped ions could keep time much more precisely than today's standard, and could be used to improve the accuracy of GPS, which relies on the synchronization of atomic clocks carried on satellites.

“We view this work as an example of bridging science and engineering, that delivers a true advantage to both academia and industry,” Sage says. Bridging this gap is the goal of the MIT Center for Quantum Engineering, where Sage is a principal investigator. “We need quantum technology to be robust, deliverable, and user-friendly, for people to use who aren't PhDs in quantum physics,” Sage says.

Simultaneously, the team hopes that this device can help push academic research. “We want other research institutes to use this platform so that they can focus on other challenges — like programming and running algorithms with trapped ions on this platform, for example. We see it opening the door to further exploration of quantum physics,” Chiaverini says.

I write about science, technology, and community at MIT Lincoln Laboratory, produce content for ll.mit.edu, and contribute to the organization's annual report, Lincoln Laboratory Journal, and other publications.

As part of the German Aerospace Center (Deutsches Zentrum für Luft- und Raumfahrt; DLR) Quantum Computing Initiative, prototype quantum computers of different architectures are to be constructed within the next four years.

EPFL researchers have developed a light-based approach to read out superconducting circuits, overcoming the scaling-up limitations of quantum computing systems.