Lightweights are more ecological – at least in the case of cars and planes. The heavier these are, the more energy they consume. That’s why manufacturers are increasingly relying on light, but strong materials for construction. Fibre-reinforced plastics meet these requirements perfectly. Millions of wafer-thin fibres provide load-bearing capacity, while the plastic between them keeps the weight down. The only disadvantage? The material is very expensive.

During his doctoral studies at the Department of Mechanical and Process Engineering at ETH Zurich, Christoph Schneeberger developed a process that could make this environmentally friendly lightweight construction material even more attractive to manufacturers – by reducing the cost. “My goal is for even comparatively low-cost cars to be built of sustainable materials in 20 or 30 years,” he explains.

Producing fibre-reinforced plastics is currently laborious and expensive: the plastic is pressed into a pre-woven fibre textile and requires a great deal of time and energy. Schneeberger and his team want to make this impregnation process superfluous. This is done by combining the two materials much earlier in the process, when the fibres are manufactured. “Our approach applies the plastic to the fibres while they’re still being spun,” says Schneeberger.

He developed the scientific basis during his doctoral studies at ETH and was able to show that the method works in principle using a prototype with a single glass fibre. Initial tests indicate that the novel material can be processed efficiently – comparable with organic sheets, currently one of industry’s innovative options. But this property could be achieved much more cheaply. “If we are able to produce in large quantities some day, we will get close to the costs of the raw materials,” says Schneeberger.

Now he’s developing the technology further as part of an ETH Pioneer Fellowship, supported by ETH Professor Paolo Ermanni and doctoral student Nicole Aegerter. Aegerter’s research investigates, among other things, which mechanisms work when several fibres are spun at the same time. The goal is to scale up production. “We would like to be spinning half a kilo of hybrid fibres per hour by the end of the year,” says Schneeberger.

Of course, this is still far from the kind of mass production that would be required for the aviation or auto industry. “We just have to take one step at a time,” says the 32-year-old. But his ambition is clear: he wants to bring the novel lightweight construction material to the market. He’s already has the roadmap in his head. Next year, he and his team intend to found a start-up and raise capital: “We will need it to build the new infrastructure for production.” The plan is to focus initially on applications that can use smaller quantities of the composite material, such as sports equipment and customised products for cars or planes. That would show that the method delivers on its promises, says Schneeberger. A later goal is to penetrate larger markets as a producer. The project already has a name and a website: Antefil Composite Tech. 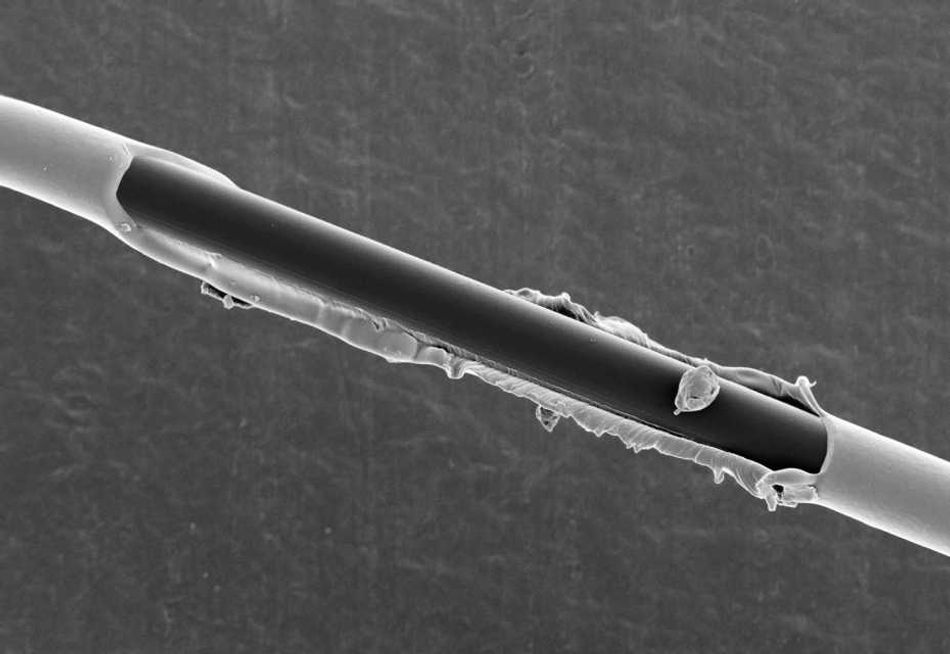 Micrograph of a hybrid fibre with a ripped thermoplastic polymer coating revealing the glass core underneath. (Image: Christoph Schneeberger)

Schneeberger’s method could also be of great benefit for another purpose: to make large construction components that are currently not recyclable more sustainable. Examples include silos, gas tanks and wind turbine blades, which are traditionally manufactured from glass fibre in combination with thermosetting plastics. These are plastics that do not melt and therefore are not recyclable; as a result, objects such as wind turbine blades are stored or disposed of in environmentally unfriendly landfills at the end of their service life.