The James Webb Space Telescope (JWST) is the next biggest milestone in space exploration that aims to uncover the secrets of our cosmic origins. Equipped with four advanced scientific instruments, it is expected that JWST will shed some light and uncover some mysteries surrounding the earliest galaxies, stars and exoplanets.

This article explains the scientific instruments that power the JWST. We start with the concept of the JWST and go on to explain how the telescope captures visuals from the past.

The idea behind the James Webb Space Telescope

All objects, when heated, radiate energy in the form of IR rays. Objects with a higher temperature emit IR rays with higher intensity and longer wavelengths. The first light in the universe was produced by the stars that were born within a few hundred million years after the big bang, which supposedly took place over 13.8 billion years ago. The light became fainter and redder until it became invisible to our eyes. JWST is designed to overcome this limitation and allows us to see what was never seen before.

Essentially we can arrive at a conclusion that the light emitted by objects that are far away from us reaches us with a time delay, or the way we see things is how they might have looked in the past. If someone from a faraway galaxy would look at the earth, they would probably see dinosaurs roaming around.

For reasons we don’t fully understand, the universe is expanding. Everything in space is moving away from everything else. This means that the light emitted by far objects gets stretched, resulting in an increase in its wavelength. This phenomenon is known as the Cosmological redshift. Consider this something loosely related to the doppler’s effect.

The light that comes to us from the galaxies situated far away gets stretched so much that the colour turns red and then IR. As the distance increases, the wavelength of light keeps getting longer and longer till it finally becomes invisible to the human eye.

JWST uses 18 hexagonal gold-plated Beryllium mirror segments, each with a diameter of 1.32 meters. Beryllium can withstand extreme temperatures and offers exceptional strength to weight ratio, making it a great choice for building the mirror. The resulting structure looks something like a giant flower. 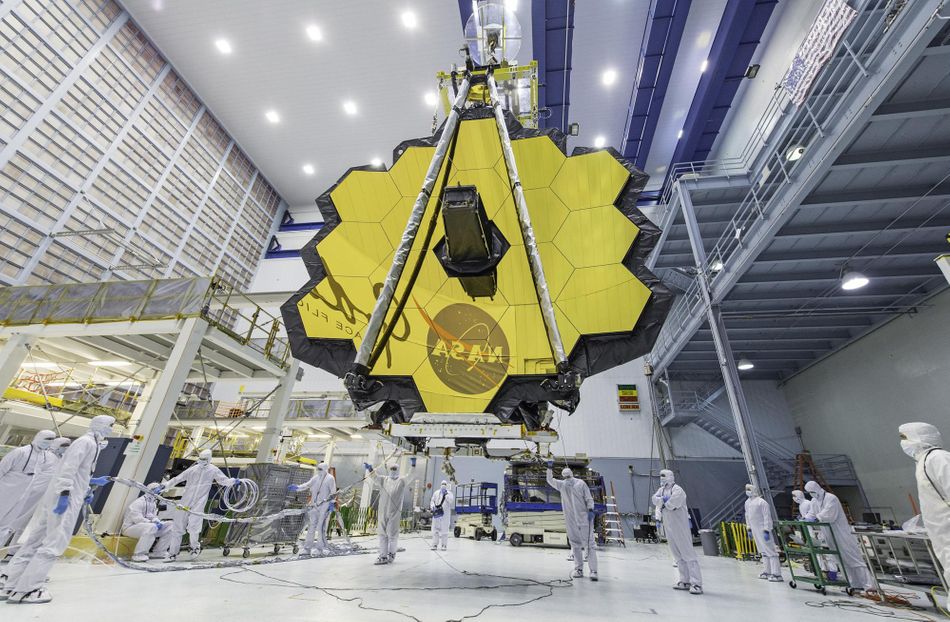 JWST's 18 segment gold plated mirror will be responsible for gathering all the IR light. Source: NASA

The four instruments that make up the JWST are explained in this section. Before we discuss the individual instruments in detail, let’s take a look at the ranges of wavelengths in which these instruments operate.

Three out of four instruments present in JWST operate in the near IR zone, whereas the fourth one works in the mid-IR zone. We will discuss the reasons for spanning different wavelengths as we explain the science instruments.

NIRCam is the primary high-resolution imaging instrument of the JWST. It is designed to capture wavelengths ranging from visible red to mid-infrared. Light having a wavelength between 0.6 micrometres and 5 micrometres can be successfully captured by the NIRCam.

The NIRCam can operate in three imaging modes:

Apart from the imaging capabilities, NIRCam can also perform some basic spectroscopy, which we shall discuss in detail in the next section of this article. But for now, here is a list of the two spectroscopy modes that the instrument supports:

NIRCam will let us observe light from the stars and galaxies that are still in the process of formation. The device can record observations from far beyond the Milky Way galaxy.

NIRCam also participates in JWST’s wavefront sensing and control system by readjusting the positions of the hexagonal mirrors in case of misalignment. This ensures that the subject always remains in focus.

It is impossible for NIRCam to show us everything we want to know about the properties of the celestial objects under observation. As the chronograph present on the NIRCam essentially blocks the light from the bright source, it is difficult to comment anything about what kind of physical conditions and elements are present on the celestial object.

NIRSpec takes a different approach to the process with the help of spectroscopy. The term refers to investigating the way electromagnetic radiations interact with matter. By studying the frequency spectrum of the light coming from a celestial object, it is possible to come up with solid conclusions regarding their chemical compositions, temperatures, and masses.

But since the IR lights coming from the faraway objects are so weak, to actually perform the spectroscopy, NIRSpec needs to collect the radiation for several hours to take a reading. To solve this limitation, the device uses a special Micro Electro Mechanical System (MEMS) solution in the form of a micro shutter array that allows it to focus on a hundred different objects at once, making simultaneous observations possible. 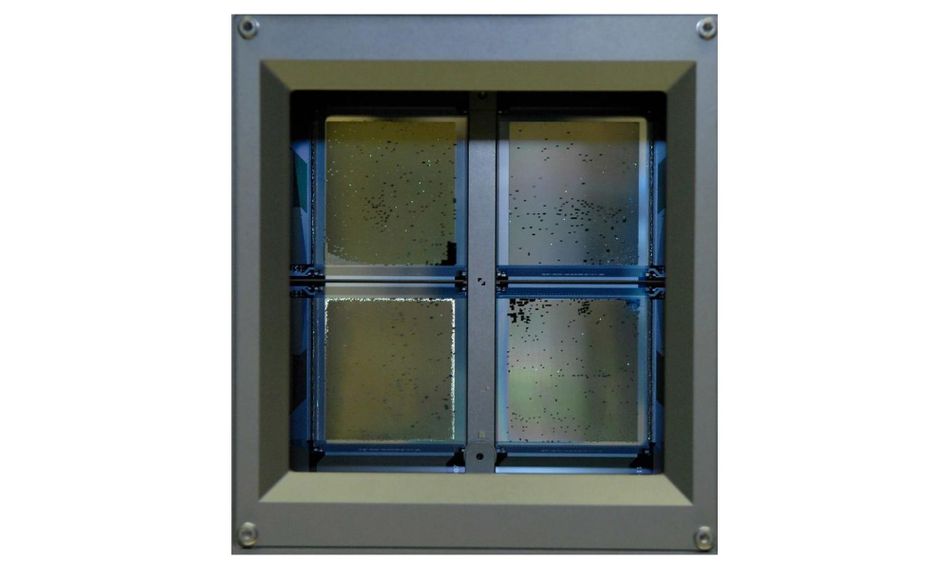 With the size just as much as a postcard stamp, the micro shutter array consists of roughly 250,000 windows that can be opened or closed with the help of a magnetic system. Source: NASA

The four spectroscopy modes that the instrument supports include:

Apart from the images captured during the Integral Field Unit Spectroscopy, the instrument doesn’t feature any dedicated imaging modes.

NIRISS works in the same range of wavelength as of NIRCam and NIRSpec, but apart from the Standard Imaging mode, NIRISS includes another advanced imaging mode.

Coming to the modes of spectroscopy, other than the Wide-Field Slitless Spectroscopy that we discussed earlier, the instrument also supports:

Though the concept is similar, the way these modes operate vastly differs between each instrument.

MIRI needs to be cooled to -266.5°C to function correctly. Otherwise, the instrument would pick up its own heat radiations. To solve this issue, a cryocooler powered with helium was designed. The system pumps the refrigerant through the tiny tubes to bring down the temperature of the MIRI to the desired value.

However, the cooling system can not block the IR radiation coming from the moon, earth and the sun. Engineers came up with the sun shield as a solution to the issue. The 21 meters long five-layer sheet is made with a material called Kapton polyimide film and coated with aluminium and doped silicon. The resulting structure is called a sun-shield and can provide a great degree of thermal isolation for the satellite. 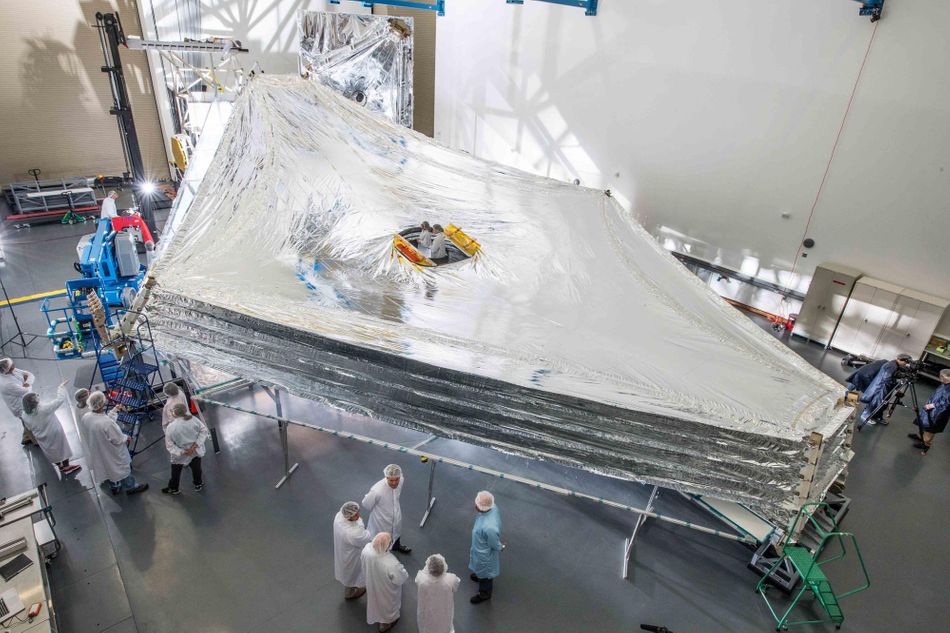 Deployment and testing of the sun-shield. Source: NASA

Even after all the considerations, the telescope needs to be 1.5 million kilometres from the earth. For reference, the distance between the earth and the moon is just 0.38 million kilometres. For the telescope to be able to send data back to earth, it should be within the range of communication equipment. It was ultimately decided that JWST is going to be placed at Lagrange point 2 (L2), which is a stable orbit zone, standing up to all the requirements.

JWST is going to be launched with Ariane 5, one of the world’s most reliable satellites launch vehicles capable of delivering JWST right into its orbit zone. The rocket is developed by the ESA and will provide launch service to NASA’s mission. 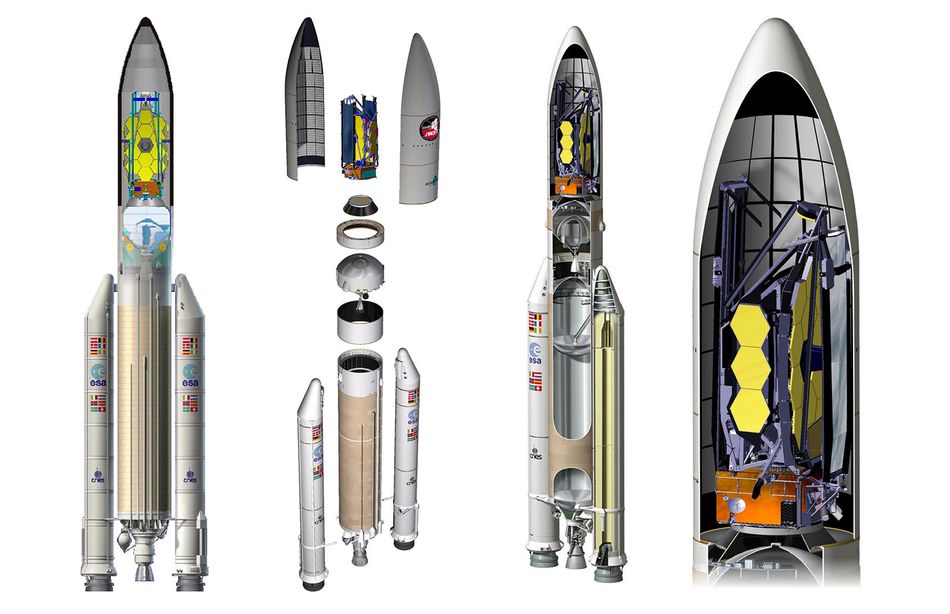 Ariane 5 is the launch vehicle of choice for delivering JWST to its orbit. Source: NASA

During the first month after the launch of the JWST, it will undergo a complex unfolding sequence. It will take JWST another 5-6 months to complete the deployment, calibration and commissioning sequences, after which it will be ready to conduct scientific observations and send data back to the earth. 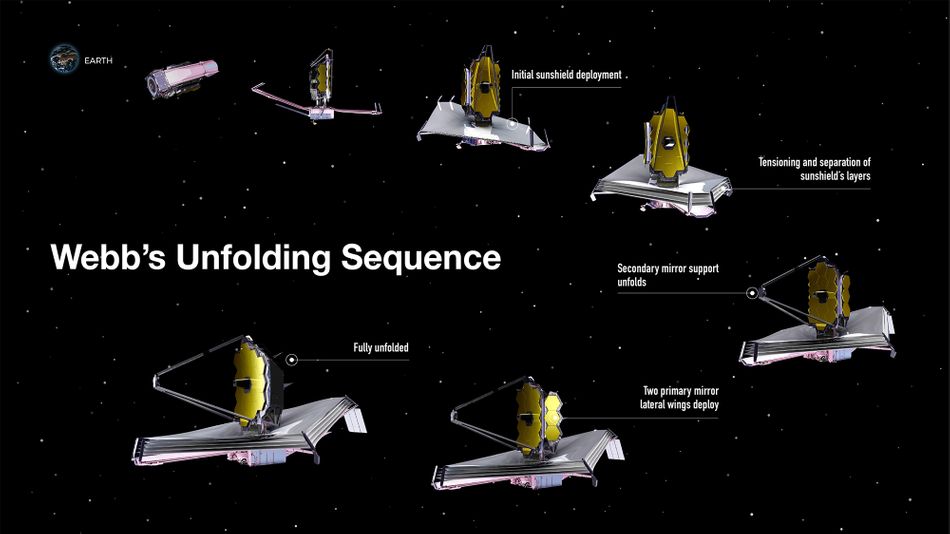 JWST’s deployment and commissioning will take around one month, and it will be sending the first images in around six months. Source: NASA

NASA is already working on the next multi-wavelength telescope going by the name of Large Ultraviolet Optical Infrared Surveyor (LUVOIR). The project might take another 20 years until it gets to see the light of the day.

JWST has a guaranteed expiry date. It has fuel only enough to maintain its position for around ten years, after which it will leave orbit, never to be found again. But despite its seemingly short life, the mission has the potential to change the very way in which we perceive the universe.

Later this summer, NASA is launching the Mars Perseverance Rover to the Red Planet with the Mars 2020 Mission. The rover is loaded with equipment to search for signs that there once was life on Mars.

The first helicopter attempting to fly on another planet is a marvel of engineering. Get up to speed with these key facts about its plans.