Martin Nisser, a PhD student at MIT CSAIL, creates machines that make machines. He works at the intersection of robotics, fabrication, and human-computer interaction.

“LaserFactory” has two parts that work in harmony: a software toolkit that allows users to design custom devices, and a hardware platform that fabricates them.

Nisser says that this type of “one-stop shop” could be beneficial for product developers, makers, researchers, and educators looking to rapidly prototype things like wearables, robots, and printed electronics.

“Making fabrication inexpensive, fast, and accessible to a layman remains a challenge,” says Nisser, lead author on a paper about LaserFactory that will appear in the ACM Conference on Human Factors in Computing Systems in May. “By leveraging widely available manufacturing platforms like 3D printers and laser cutters, LaserFactory is the first system that integrates these capabilities and automates the full pipeline for making functional devices in one system.” 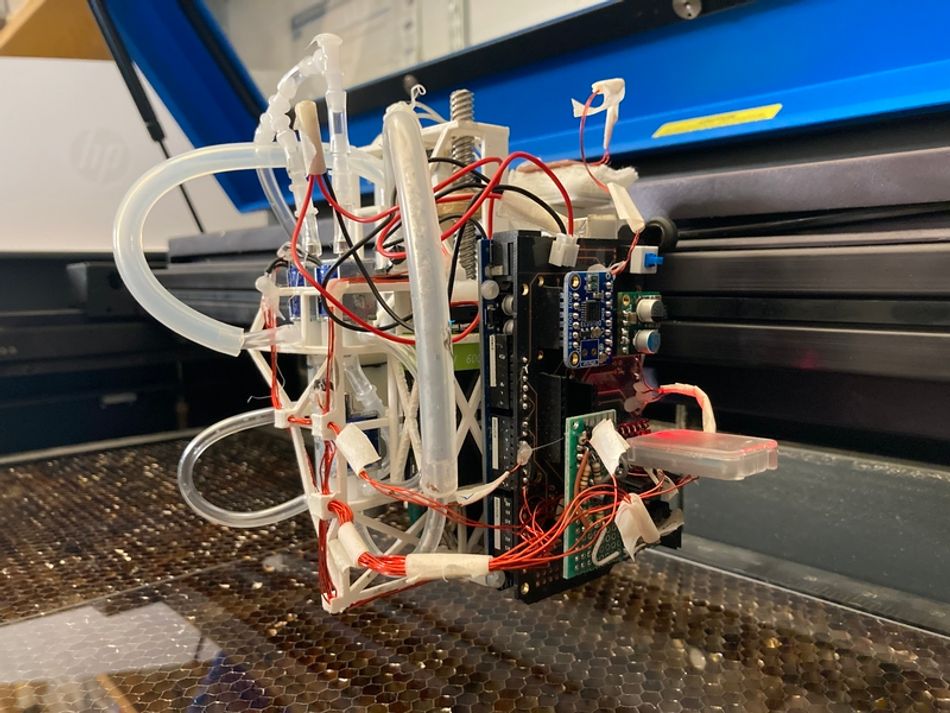 Let’s say a user has aspirations to create their own drone. They’d first design their device by placing components on it from a parts library, and then draw on circuit traces, which are the copper or aluminum lines on a printed circuit board that allow electricity to flow between electronic components. They’d then finalize the drone’s geometry in the 2D editor. In this case, they’d use propellers and batteries on the canvas, wire them up to make electrical connections, and draw the perimeter to define the quadcopter’s shape.

The user can then preview their design before the software translates their custom blueprint into machine instructions. The commands are embedded into a single fabrication file for LaserFactory to make the device in one go, aided by the standard laser cutter software. On the hardware side, an add-on that prints circuit traces and assembles components is clipped onto the laser cutter.

Similar to a chef, LaserFactory automatically cuts the geometry, dispenses silver for circuit traces, picks and places components, and finally cures the silver to make the traces conductive, securing the components in place to complete fabrication.

The device is then fully functional, and in the case of the drone, it can immediately take off to begin a task — a feature that could in theory be used for diverse jobs such as delivery or search-and-rescue operations.

As a future avenue, the team hopes to increase the quality and resolution of the circuit traces, which would allow for denser and more complex electronics.

As well as fine-tuning the current system, the researchers hope to build on this technology by exploring how to create a fuller range of 3D geometries, potentially through integrating traditional 3D printing into the process.

“Beyond engineering, we’re also thinking about how this kind of one-stop shop for fabrication devices could be optimally integrated into today’s existing supply chains for manufacturing, and what challenges we may need to solve to allow for that to happen,” says Nisser. “In the future, people shouldn’t be expected to have an engineering degree to build robots, any more than they should have a computer science degree to install software.”

This research is based upon work supported by the National Science Foundation. The work was also supported by a Microsoft Research Faculty Fellowship and The Royal Swedish Academy of Sciences.