The development of climate-friendly technologies suitable for everyday use in the air transport system of the future is at the top of the list of priorities for the German Aerospace Center (Deutsches Zentrum für Luft- und Raumfahrt; DLR). Among other things, research efforts are focused on new aircraft configurations that can be successfully operated commercially with significantly lower emissions and reduced noise pollution. Electric or hybrid-electric propulsion systems have potential for aircraft configurations that meet these requirements.

As part of the SynergIE joint project funded by the German Federal Ministry for Economic Affairs and Energy (Bundesministerium für Wirtschaft und Energie; BMWi), DLR researchers in Hamburg, Braunschweig and Göttingen, together with partners Airbus, Rolls-Royce and Bauhaus Luftfahrt e.V., have studied the entire system of a hybrid electric short-haul aircraft that can carry up to 100 passengers with distributed propulsion units on the wings. With this technology, the propulsion system is distributed across the entire span of the wings, which leads to more efficient airflow around the aircraft. 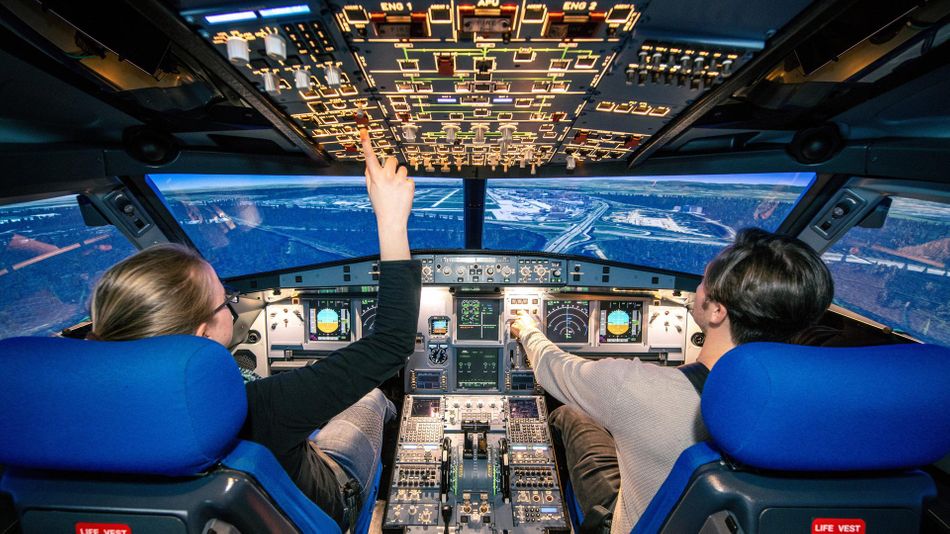 "In conventional regional aircraft, the wings are often oversized in order to achieve good performance during take-off and landing," explains Martin Hepperle from the DLR Institute of Aerodynamics and Flow Technology. "These aircraft then have excessively high energy consumption during cruising flight." Highly accurate flow simulations show that electric propulsion systems allow the thrust to be distributed over multiple smaller propellers. When the airflow from these passes over the wing, it provides increased lift and more efficient aerodynamics. This effect enabled the project partners to reduce the wing area and the wing mass and to reduce the drag caused by the interactions between the propeller airflows and the wing tip vortices.

As a final design for an aircraft with distributed hybrid-electric propulsion, the researchers selected and evaluated a concept with turbogenerators in the fuselage and 10 electric motors along the leading edge of the wing as the best solution out of the various possible arrangements. The optimal design and installation of the propellers makes it possible to reduce the chord of the wing and size of the rudder, and thus reduce energy consumption by approximately 10 percent. "The special arrangement of the propellers allows us to compensate for the weight disadvantages of the hybrid-electric propulsion system," says Hepperle. "We were also able to design the vertical stabiliser to be smaller and thus lighter and with less drag in our multi-engine concept," he continues. "This concept can even compensate for the failure of two electric motors; it therefore offers greater operational reliability as well."

During the virtual first flight in the DLR Air Vehicle Simulator (AVES), DLR test pilots evaluated the flight characteristics of the hybrid electric short-haul aircraft. Particularly during the landing approach, it became apparent that the aerodynamic interaction between the propeller wakes and the wings strongly influences the flight characteristics of the aircraft. To compensate for the reduced effectiveness of the smaller rudder and vertical stabiliser, a research team from the Institute of Flight Systems developed a flight controller that enables yaw control – rotation about the vertical axis – using the rudder combined with differential thrust.

In the SynergIE project, the participants developed and established a universal 'software simulation toolchain' for future aircraft designs with distributed hybrid electric propulsion systems at DLR, in order to expand the overall evaluation capability of German research and industry. The interdisciplinary work includes the integrated aerodynamics of the wing and propellers in close interaction with flight mechanics issues for control as well as boundary conditions of the structure and aeroelasticity. In future, remaining questions on the aeroacoustics of the distributed propellers and on optimal flap systems for landing approaches are to be resolved.

In this update, we dive into the life of the Alauda Aeronautics engineering and design team during the month of October. The mission: get two Alauda Mk3 Speeders flying simultaneously.