As you might have guessed, the name SEADOVE is taken from the word Sea and Dove. It is an AUV (Autonomous Underwater Vehicle) inspired by the navigational abilities of some species of Doves. The underwater robot is used for emergency cases of airplane sea-crashes. What makes it unique is instead of being used for searching the airplane crash location, it is ejected from the airplane to "ask for help".

How it all started

It was Sunday morning when I got up and walked downstairs to watch the news. The Air Asia flight QZ8501 was expected to arrive at Singapore at 07:30, but it had been 2 hours pass that time. I still remember that day so vividly. It was during the end of year in 2014 where a lot of my friends were traveling for holidays. I was anxious and had loads of questions in mind like; "What happened to the airplane", "Could anyone I know be on that flight?", "If the plane crashes, would all the passengers survive?"

Hour after hour, with the TV news always on, and social media groups pouring with discussions, everyone in Surabaya, Indonesia seemed to keep themselves updated with the latest news. Later that day I discovered that there were people I know on that flight, one of them included my classmate's family member.

An overview of airplane sea-crashes

An airplane is claimed to be the safest mode of transportation, and accidents are less likely to happen in the ocean. However, given big enough scale, such accidents will keep happening from time to time. This makes the problem crucial as the number of people that use airplanes has grown increasingly. Furthermore in almost all sea-crashes no passengers survived. This is mainly due to extreme conditions in the ocean and very limited resources while it usually takes weeks to locate the crash location.

Airplane crashes in the ocean are generally harder to locate. The tracking system and emergency devices that work well on land face different challenges when used for water scenarios. Most tracking systems do not cover areas above the water, so positions of airplanes are usually predicted using Time Difference of Arrival (TDoA). This assumption cannot be relied on as the airplane could change direction, speed, and altitude in unpredictable ways prior to crashing. Emergency devices to send distress signals also don't work well on salt water due to its conductivity (electromagnetic waves cannot travel through electrical conductors).

Post-accident information directly after the crash are also harder to obtain. Locating the airplane crash itself takes a lot of time and the ocean current makes it harder to understand what happened just after the impact.

How does the current emergency system work?

Here are lists of instruments used in the current emergency system

ADS-B is a surveillance technology that uses satellite navigation to track airplanes. The ADS-B coverage does not extend over the oceans. This means that airplanes above the ocean cannot be tracked accurately. From the coverage map below it can be seen that areas above the water are not covered by the surveillance system. 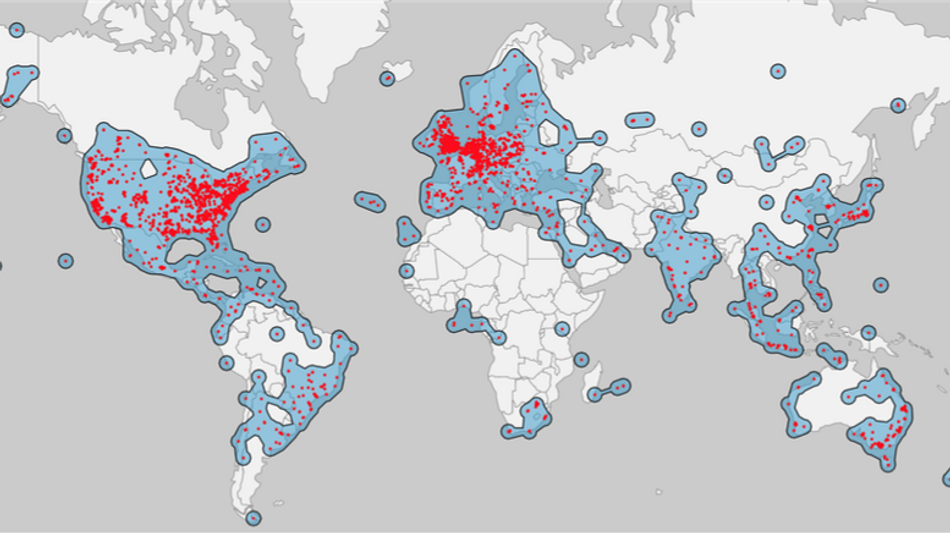 ELT is activated in case of an emergency to transmit SOS signal from the airplane. This distress signal can be detected by non-geostationary satellites and then located precisely. The problem with ELTs is that it is not waterproof or durable which makes it not usable for sea-crash events.

ULB is fitted to both black-boxes (CVR and FDR). The device is activated by immersion in water, it emits an ultrasonic pulse at 37.5 kHz every second for a duration of only 30 days. If the black-box cannot be found within 30 days, it is almost impossible to get it. The detection range of the signal is also very limited, approximately 2 km, which is just a tiny dot if we look at the world map.

Multiple AUVs had been used to search for the flight MH370 that went missing. Unfortunately, it turned out nothing was found after repeatedly deploying a robot to find signals from the ULB. The figure below shows how the Search and Rescue team operates using the help of AUVs.

My interest in underwater robotics encouraged me to build my own AUV that can help find airplane crash locations more effectively. “If we can’t find them, let them find us” is the basic idea for SEADOVE.

SEADOVE is a GPS based autonomous underwater vehicle (AUV) that is equipped in the airplane and is ejected upon impact (Instead of being deployed from the ground to find the airplane). After the impact, the robot will record the crash coordinates and transmit the data as an SOS radio signal. The distress signal can be received by the Floating Transceiver Station (FTS) and also passers-by (ships, helicopters, other planes) near the location. The buoys will be located in various strategic spots in the ocean and it can relay the information received from the AUV to the SAR team. While transmitting the SOS signal, SEADOVE will be heading closer to the nearest FTS in case that the signal transmission cannot reach it from it's initial position. When the crash coordinates have been received by the rescuers, they can go to the location faster. This increases the chance of survival and avoids loss of black-boxes.

The idea kept being refined while the SEADOVE AUV prototype was being made. The prototype is funded personally and made mostly using spare parts of my previous projects. The body is made of an acrylic tube and 3D printed ABS plastic. To learn more about the project check out this project post.

The SEADOVE underwater vehicle needs to be programmed to navigate autonomously using the "haversine formula". The Haversine formula determines the great-circle distance between two points on a sphere (yes, the Earth is round) given their longitudes and latitudes. In the case of SEADOVE, the formula is used for measuring the distance between the crash coordinates and each of the FTSs to find the nearest one. Once it has found the nearest FTS, the robot will go to that location.

I designed a very simple land robot prototype to test the program as it is easier to perform the experiment on land rather than underwater. After about a month of testing and redesigning the program, it finally worked. The test was done in an empty field using simulated crash location and FTS coordinates. The next challenge is to implement the same algorithm to the underwater robot. The first AUV prototype uses two brushed DC motors for horizontal movements and another two for depth control. After testing the new design, I found out that this configuration is not effective. The motors are under-powered and the model does not resemble what the final product would look like.

This leads to the next prototype which is the current one. The newer AUV uses a more powerful brushless motor with a rudder to maneuver. The newer model also looks better and can be regarded as a representation of what the final design would look like. 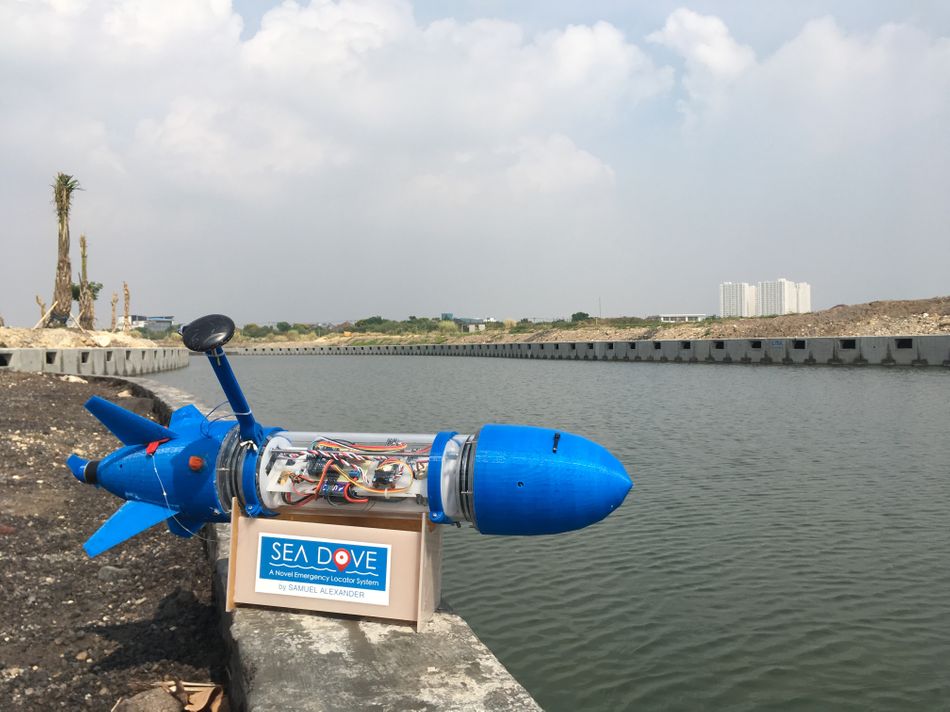 The challenge with the latest prototype is to modify the haversine formula algorithm to work with a different type of motor and configuration. Another challenge is to make sure that there are no leaks in the electronics tube and waterproof all the electronic components outside the tube. Most of the components are waterproofed using epoxy glue. The underwater robot is then once again tested using simulated crash location and FTSs in a river. After troubleshooting both software and hardware problems for a couple of months, the prototype finally works!

Questions about this project? Drop them in the comments!

Dolphin 1 is a revolutionary remote-controlled lifesaving buoy from Ocean Alpha. This company provides unmanned surface vehicles to government and commercial entities with 92 USV related pacts spanning 25 products ranging from 1 to 50 meters in length.