Solar panels convert light to electricity but have limited efficiency, although this can be improved with bright, colorful, light-trapping slabs of luminescent materials called luminescent solar concentrators (LSCs). Unlike solar panels, LSCs can be favorably integrated into urban settings to create a sustainable, visually appealing environment. Despite being around since the late 1970s, LSCs have struggled to have the same commercial impact as solar panels, partially due to a lack of measurement standards. TU/e researcher Michael Debije is on the case though, and with collaborators from the UK and Italy, has devised a set of LSC measurements whose adoption could ease commercialization of LSCs.

We artificially light our homes, we transmit data using light in photonic devices, and we harvest energy from light using solar photovoltaic (PV) panels. Our dependency on light is there for all to see.

Although solar PV panels are almost omnipresent in society and contribute to the energy transition, there are drawbacks. “The dark color of solar panels is not pleasing to the eye,” says Michael Debije, Assistant Professor in the Department of Chemical Engineering and Chemistry at TU/e. “They also exhibit reduced performance in shaded areas and under cloudy conditions, are only available in limited shapes and sizes, and can only collect light from one side. And solar PV panels only respond to certain wavelengths of light.”

Another light-based technology can address some of the aesthetic and operational limitations by complementing solar PV panels, thus allowing solar PV panels to be used in almost any location. Enter luminescent solar concentrators.

Luminescent solar concentrators (LSCs) consist of luminescent materials – luminophores – coated on the surface of a polymer or glass plate. Light is captured by the luminophores at one wavelength, and then re-emitted at a longer wavelength.

Unlike PV panels, LSCs are sensitive to diffuse light, visually pleasing, and are not limited to use on rooftops. Critically, LSCs can increase the sensitivity of PV panels to more wavelengths of light.

Lscs To The Rescue

That’s where LSCs come to the rescue. High-energy photons are captured by luminophores, transported through the material via total internal reflection, and then re-emitted at longer wavelengths. PV cells beside the edges of the LSC then absorb the longer wavelength light.

“LSCs can’t compete straight up with solar panels on electricity output. But they can provide solar panels with more useable light,” says Debije. 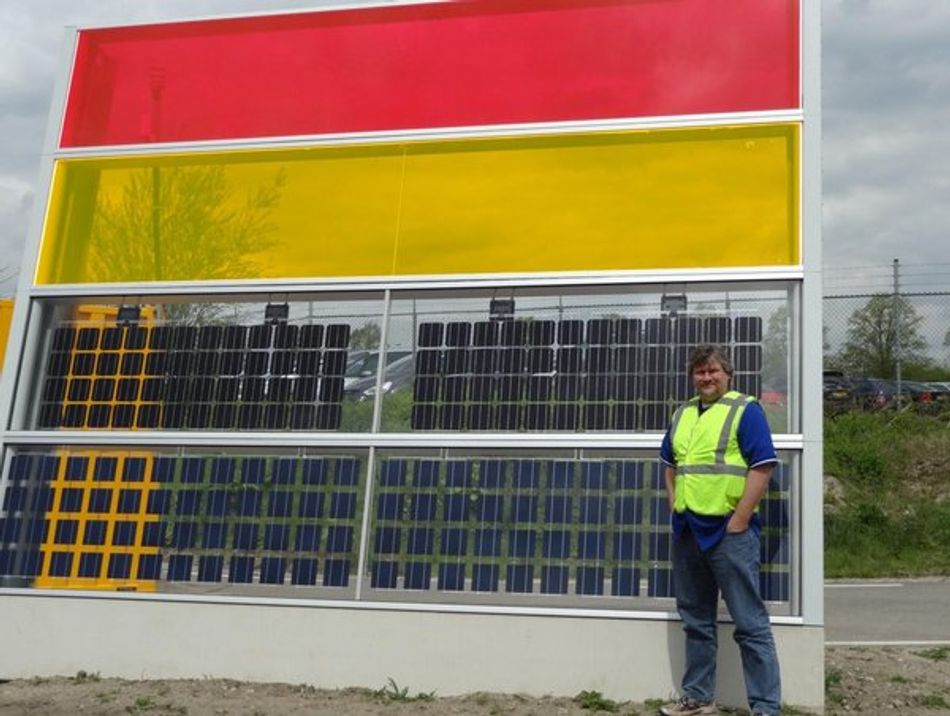 Michael Debije standing next to part of the Solar Noise Barrier project, which stood in Den Bosch 2015-6.

Currently, LSCs lack proper identity, and that’s not good for the technology. “The field of LSCs has been around for 40 years, but has failed to gain industrial momentum,“ says Debije.

While their functionality is impressive, there is a critical issue with LSCs. Debije: “It’s great that LSCs improve the efficiency of PVs, but this has led to a problem with standards. Currently, it’s difficult to compare the performance of different LSC devices alone because many researchers evaluate LSCs in the context of PV technologies.”

An additional problem is that some researchers view LSCs as photonic devices. The lack of consensus has been damaging to their widescale use, an issue that deeply concerns Debije. “Progress has been slowed by the lack of standard reporting methods for LSCs, meaning it has been impossible to compare data collected for the past 40 years. This is problematic.”

Motivated by the lack of proper protocols to classify LSC technologies, Debije, along with Rachel Evans (University of Cambridge, UK) and Gianmarco Griffini (Politecnico di Milano, Italy), have devised a series of measurements that can be carried out by any laboratory. These measurement approaches are presented in a recent paper in the journal Energy & Environmental Science.

“Our aim is to make things easy for the LSC community to compare different LSC designs. Prior to this, standardized measurement approaches were unavailable,” notes Debije. In addition to presenting measurement approaches for LSC, Debije and his collaborators propose that moving forward LSCs must be treated as photonic devices.

Time Is Of The Essence

“If we’re going to legitimize LSCs, these measurements should be followed for all LSC devices,” says Debije. “This technology could have a huge impact in urban design, energy production, chemical processing, and hydrogen production. There are an increasing number of labs working on LSCs, but there is also an increasing number of detractors who highlight the absence of standardization.”

Luminescent solar concentrators can move beyond complementing solar PV panels, they must. The protocols devised by Debije, Evans, and Griffini can tilt the balance in favor of rapid and standardized deployment.

Nevertheless, LSCs must step out of the shadow of solar PV panels.

It’s LSCs time to shine, but time is of the essence.