NIST firefighters douse flames bursting from a building as a flashover occurs during an experiment. Credit: NIST

Firefighting is a race against time. Exactly how much time? For firefighters, that part is often unclear. Building fires can turn from bad to deadly in an instant, and the warning signs are frequently difficult to discern amid the mayhem of an inferno.

Seeking to remove this major blind spot, researchers at the National Institute of Standards and Technology (NIST) have developed P-Flash, or the Prediction Model for Flashover. The artificial-intelligence-powered tool was designed to predict and warn of a deadly phenomenon in burning buildings known as flashover, when flammable materials in a room ignite almost simultaneously, producing a blaze only limited in size by available oxygen. The tool’s predictions are based on temperature data from a building’s heat detectors, and, remarkably, it is designed to operate even after heat detectors begin to fail, making do with the remaining devices.

The team tested P-Flash’s ability to predict imminent flashovers in over a thousand simulated fires and more than a dozen real-world fires. Research, just published in the Proceedings of the AAAI Conference on Artificial Intelligence, suggests the model shows promise in anticipating simulated flashovers and shows how real-world data helped the researchers identify an unmodeled physical phenomenon that if addressed could improve the tool’s forecasting in actual fires. With further development, P-Flash could enhance the ability of firefighters to hone their real-time tactics, helping them save building occupants as well as themselves.

Flashovers are so dangerous in part because it’s challenging to see them coming. There are indicators to watch, such as increasingly intense heat or flames rolling across the ceiling. However, these signs can be easy to miss in many situations, such as when a firefighter is searching for trapped victims with heavy equipment in tow and smoke obscuring the view. And from the outside, as firefighters approach a scene, the conditions inside are even less clear.

“I don't think the fire service has many tools technology-wise that predict flashover at the scene,” said NIST researcher Christopher Brown, who also serves as a volunteer firefighter. “Our biggest tool is just observation, and that can be very deceiving. Things look one way on the outside, and when you get inside, it could be quite different.”

Computer models that predict flashover based on temperature are not entirely new, but until now, they have relied on constant streams of temperature data, which are obtainable in a lab but not guaranteed during a real fire.

Heat detectors, which are commonly installed in commercial buildings and can be used in homes alongside smoke alarms, are for the most part expected to operate only at temperatures up to 150 degrees Celsius (302 degrees Fahrenheit), far below the 600 degrees Celsius (1,100 degrees Fahrenheit) at which a flashover typically begins to occur. To bridge the gap created by lost data, NIST researchers applied a form of artificial intelligence known as machine learning.

“You lose the data, but you’ve got the trend up to where the heat detector fails, and you've got other detectors. With machine learning, you could use that data as a jumping-off point to extrapolate whether flashover is going to occur or already occurred,” said NIST chemical engineer Thomas Cleary, a co-author of the study.

Machine-learning algorithms uncover patterns in large datasets and build models based on their findings. These models can be useful for predicting certain outcomes, such as how much time will pass before a room is engulfed in flames. 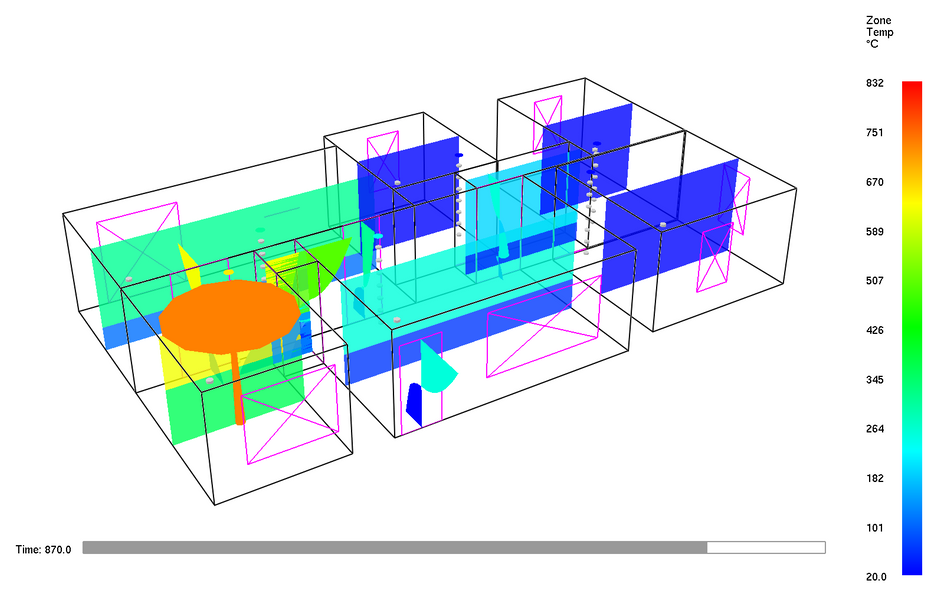 Researchers simulated more than 5,000 fires in a digital three-bedroom house, with crucial details such as the fire origin varying between each. The team's machine learning-based tool, P-Flash, correctly predicted whether a flashover (a potentially deadly phenomena) occurred 86% of the time based on simulated temperature data.  Credit: NIST To build P-Flash, the authors fed their algorithm temperature data from heat detectors in a burning three-bedroom, one-story ranch-style home  — the most common type of home in a majority of states. This building was of a digital rather than brick-and-mortar variety, however.

The authors ran 5,041 simulations, with slight but critical variations between each. Different pieces of furniture throughout the house ignited with every run. Windows and bedroom doors were randomly configured to be open or closed. And the front door, which always started closed, opened up at some point to represent evacuating occupants. Heat detectors placed in the rooms produced temperature data until they were inevitably disabled by the intense heat.

To learn about P-Flash’s ability to predict flashovers after heat detectors fail, the researchers split up the simulated temperature recordings, allowing the algorithm to learn from a set of 4,033 while keeping the others out of sight. Once P-Flash had wrapped up a study session, the team quizzed it on a set of 504 simulations, fine-tuned the model based on its grade and repeated the process. After attaining a desired performance, the researchers put P-Flash up against a final set of 504.

The researchers found that the model correctly predicted flashovers one minute beforehand for about 86% of the simulated fires. Another important aspect of P-Flash’s performance was that even when it missed the mark, it mostly did so by producing false positives — predictions that an event would happen earlier than it actually did — which is better than the alternative of giving firefighters a false sense of security.

“You always want to be on the safe side. Even though we can accept a small number of false positives, our model development places a premium on minimizing or, better yet, eliminating false negatives,” said NIST mechanical engineer and corresponding author Wai Cheong Tam.

The  initial tests were promising, but the team had not grown complacent.

“One very important question remained, which was, can our model be trusted if we only train our model using synthetic data?” Tam said.

Luckily, the researchers came across an opportunity to find answers in real-world data produced by Underwriters Laboratories (UL) in a recent study funded by the National Institute of Justice. UL had carried out 13 experiments in a ranch-style home matching the one P-Flash was trained on, and as with the simulations, ignition sources and ventilation varied between each fire.

NIST tested P-Flash further by comparing its predicted temperature data to temperatures measured in 13 real house fires, purposefully lit during Underwriters Laboratories (UL) experiments. The aftermath of a UL experiment can be seen in before-and-after photos of the house's living room, along with a temperature sensor strung from the ceiling. Credit: UL Firefighter Safety Research Institute

The NIST team trained P-Flash on thousands of simulations as before, but this time they swapped in temperature data from the UL experiments as the final test. And this time, the predictions played out a bit differently.

The team identified a phenomenon called the enclosure effect as a possible explanation for the sharp drop-off in accuracy. When fires burn in small, closed-off spaces, heat has little ability to dissipate, so temperature rises quickly. However, many of the experiments that form the basis of P-Flash’s training material were carried out in open lab spaces, Tam said. As such, temperatures from the UL experiments shot up nearly twice as fast as the synthetic data.

Despite revealing a weak spot in the tool, the team finds the results to be encouraging and a step in the right direction. The researchers’ next task is to zero in on the enclosure effect and represent it in simulations. To do that they plan on performing more full-scale experiments themselves.

When its weak spots are patched and its predictions sharpened, the researchers envision that their system could be embedded in hand-held devices able to communicate with detectors in a building through the cloud, Tam said.

Firefighters would not only be able to tell their colleagues when it’s time to escape, but they would be able to know danger spots in the building before they arrive and adjust their tactics to maximize their chances of saving lives.