A hand exoskeleton designed for everyday wear has to be light and straightforward to use. (Bild: Yves Bachmann / ETH Zurich)

Hands are our most important tools. Many stroke survivors struggle with a serious loss of motor function in their affected hand. Despite undergoing intensive physiotherapy and occupational therapy in the first few weeks, two out of three patients subsequently find that this hand remains impaired. This constraint takes a heavy toll on their independence in day-to-day life. Roger Gassert, Professor of Rehabilitation Engineering at ETH Zurich, aims to change that.

“The use of robotic devices for therapy is fairly widespread in hospitals and rehabilitation centres,” says Gassert. However, he sees room for improvement, particularly when patients return home from a clinic environment. “The transition to everyday life is tricky,” notes Gassert, adding that the moment patients are on their own, they tend to favour their healthy hand, using it more often to relieve their impaired hand. The consequences are dire. The hand remains untrained, and the skills acquired so painstakingly in rehab are lost. The impairment worsens, as do the adverse effects of paresis.

Use it or loose it

A training regimen to exercise the hand’s functions could counteract this problem and provide additional benefits such as moving and strengthening the arm. “Gripping isn’t just about muscle strength. It also involves sensory perception and dynamic interaction with the environment, which are cognitively demanding,” says Gassert. But how do you motivate people to keep training and using their impaired hand at home?

Gassert and his team are pursuing two avenues. For one, they aim to continue developing a robot designed for hand therapy in hospitals so that patients can also use it independently at home. The other option – a hand exoskeleton to help patients grasp objects – is for cases where the first approach has little chance of succeeding. Both robots are already undergoing trials with partner clinics. But what works in the sheltered setting of a rehab facility may not be suitable for day-to-day use at home.

The ReHapticKnob is a robot-assisted therapy device with two finger modules. The patient interacts with these interfaces, shifting their relative positions with a pinching motion or rotating both. Various sensors track the hand’s motor and sensory functions with great accuracy. This device can render a wide range of virtual objects with different characteristics for the patient to feel. Using virtual reality, patients can monitor how their fingers are accomplishing the task of grasping an object. The robot allows patients to execute special exercises based on neurocognitive therapy, which were developed and implemented in collaboration with the Hildebrand Clinic in Brissago. It automatically adjusts the degree of difficulty according to an assessment of how the therapy is progressing.

The robot has been used successfully for therapy in a clinical setting, as one study has shown. It remains to be seen if this approach works at home. “You can’t just hand this kind of device over to
patients and say, ‘your turn,’” says Gassert, pointing out the many challenges they would face. This is why researchers are starting with a follow-up study to determine how patients fare once they are familiar with the devices and are free to use them independently at the clinic but outside of regular therapy hours.

Reduced to the max

Gassert is well aware that technologies for home use have to be convenient, easy to operate, robust and as low-maintenance as possible. Reduce to the max: that’s the mantra. Tenoexo, a hand exoskeleton, has already been extensively streamlined. This assistive device is designed to help people grasp real objects in their day-to-day activities. “Today’s devices are very complex and heavy. They may be able to do a lot, but they’re hard to carry and put on without help,” says Gassert. In marked contrast, the exoskeleton from Gassert’s laboratory is streamlined for utmost simplicity. 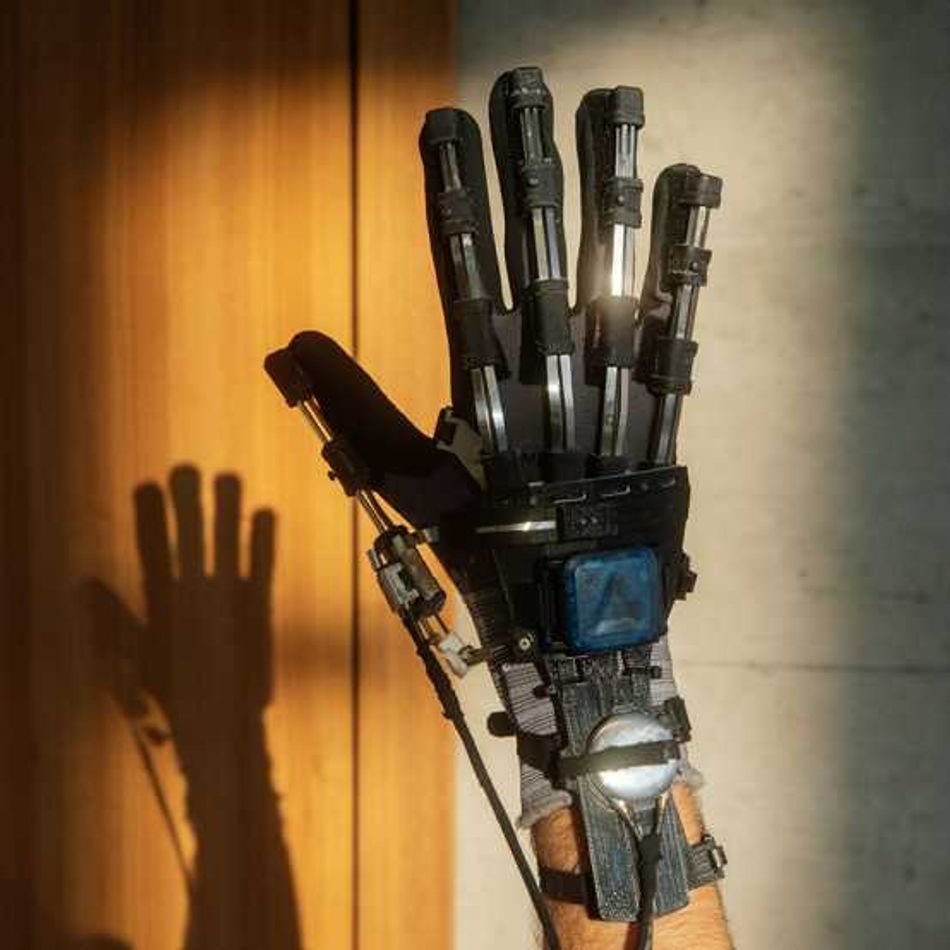 The researchers found that four grasp types suffice to hold 80 percent of all objects, which is why at the moment the exoskeleton can only close all its fingers at the same time. Equipped with elastic elements, they adapt to whatever object they grasp. The motor is housed in a small backpack. All in all, the exoskeleton weighs less than 150 grams. The wearer gives the command to move by simply pressing a button. Gassert’s team decided to do without sensors and control channels that connect the nerves or brain to a brain-computer interface (BCI). “That’s obviously exciting, but it’s still too unreliable for use in daily life,” says Gassert, dismissing the BCI option with a wave of his hand.

He is vigorously pursuing his vision of introducing robot-supported rehabilitation and assistance into people’s everyday lives. Far from limiting his collaboration to clinics and partners from Switzerland and neighbouring countries, Gassert will also be able to develop his vision further in the new Future Health Technologies research module at the Singapore-ETH Centre. The environment in Singapore looks ideal from his perspective, with skilled research partners, a tech-savvy society and a close-knit healthcare system that accompanies patients as they return to their lives at home. “We hope this will give us easier access to patients in their homes,” says Gassert.

In manufacturing, work-related lower-back injuries from lifting and handling heavy objects account for approximately $100 billion in medical bills annually in the United States, according to data from the Bureau of Labor Statistics.

An artificial retina that could help restore sight to the blind