“Lithium is becoming a critical material as it is used extensively in cell-phones and car batteries, while, in principle, sodium could be a much cheaper, more abundant alternative,” says Ferenc Simon, a visiting scientist in the group of László Forró at EPFL. “This motivated our quest for a new battery architecture: sodium doped graphene.”

Graphite doped with lithium atoms, is one of the most common anode material in batteries, and won the 2019 Nobel prize in Chemistry. But the increasing use of lithium can lead to a shortage.

On the other hand, sodium is the 6th most abundant element on Earth, while lithium is just 25th. Plus, sodium is available from various sources including rock salt or sea water. However, a major obstacle for using sodium batteries is the fact that graphite can only swell about one tenth of that with lithium, which gives a reduced charge storage capacity and a shorter battery life time.

The EPFL guest scientists, Ferenc Simon and Bence G. Márkus (from the Budapest University of Technology and Economics), with the team of Professor Forró at the Laboratory of Physics of Complex Matter, have found a novel synthesis route to dope a few layers of graphene with sodium, which produced a highly efficient storage capacity.

The method uses liquid ammonia as a catalyst due to its well-known ability to dissolve alkali metals, thus helping the reaction, and conveniently leaving the final material as a gas. The result is a material with a high sodium content.

An additional attractive feature of the few-layer graphene matrix is that the magnetic moment (“spin”) of the transferred electron from sodium maintains its orientation for a long time. This property is a prerequisite in a branch of information technologies called spintronics. “Our material can be synthesized on industrial scales and still retaining its excellent properties,” says Ferenc Simon, the paper’s senior author.

The exciting results notwithstanding, the researchers acknowledge that the road to commercial products will be long. But with the almost exponential growth in demand for batteries, the study opens up very promising possibilities for innovation.

The results are published in ACS Nano. 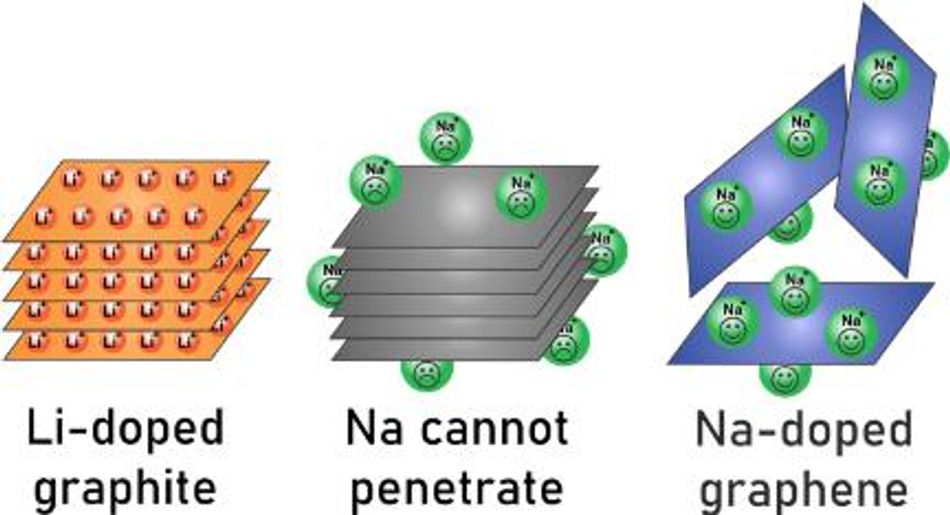 (From left to right) A common anode in lithium-ion batteries is lithium-doped graphite, however Na cannot penetrate into graphite. The solution (rightmost figure)separates the graphene layers as Na can effectively dope these. Credit: Bence G. Márkus (BME/EPFL)

A window into battery life for next-gen lithium cells

Watching electrodes degrade could help battery researchers take lithium to the next level.

Innovative Processes: KIT is Technology Leader in the Production of Battery Electrodes

A battery that harnesses energy from mixing of freshwater and seawater

Made from affordable and durable materials, this technology could make coastal wastewater treatment plants energy-independent and carbon neutral.