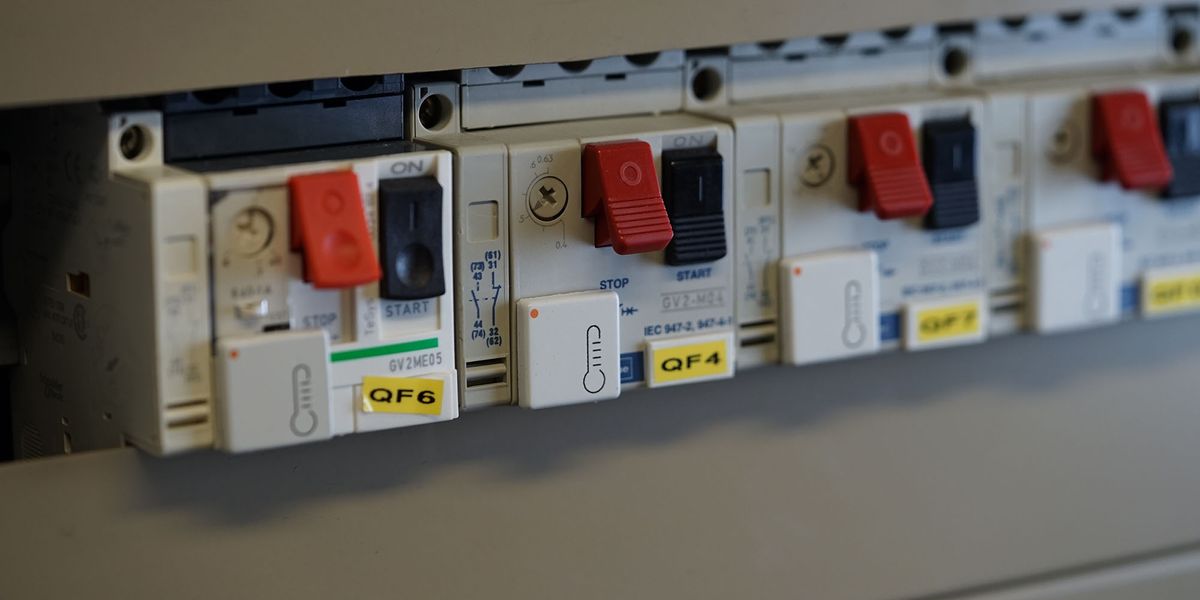 During the past decade, we have witnessed a proliferation of internet-connected devices and Internet of Things (IoT) applications in areas like manufacturing, healthcare, smart buildings, trade, and industry. IoT has a transformative effect on these sectors: It facilitates the pervasive collection of information about the physical world, remote monitoring of business processes, and the extraction of unique insights about how to optimize business operations.

In many cases, IoT systems and technologies are sources of open and disruptive innovation. For instance, leveraging IoT devices like cameras and microphones makes it possible to implement voice and gesture-enabled remote control applications in settings like industrial plants and residential buildings. As another example, the analysis of data from multiple sensing sources (e.g., vibration sensors, temperature sensors, thermal cameras) has enabled the development of novel asset management and predictive maintenance applications.

When it comes to IoT-driven innovation, the sky is the limit. Every year, thousands of IoT developers and solution integrators introduce and implement novel ideas that improve the accuracy, the versatility, the power efficiency, and the security of IoT applications, while reducing their cost. Innovating with IoT technologies can be challenging, as applications involve not only software development but IoT hardware that is often limited and cumbersome. Hence, IoT innovators must combine hardware and software skills. In this context they must also be offered access to hardware devices and software development resources that could support the prototyping and testing of their ideas.

IoT Development Boards: The Basics You Need to Know

Many innovative applications are prototyped and tested on IoT development boards. The latter are hardware devices that are used to prototype IoT projects and applications. IoT boards facilitate IoT integrators to experiment with different hardware components and their configurations, which obviates the need for developing custom hardware. Hence, IoT development boards alleviate the design complexity and the high cost of IoT hardware developments. This is the reason why there are already many IoT development boards in the market. These boards come with a wide range of specifications and support a variety of IoT applications. The growth of the IoT boards market keeps up with the evolution of the thriving IoT market, i.e., IoT’s market growth increases the demand for IoT boards.

In practical terms, a development board is a printed circuit board that comprises hardware that supports R&D and experimentation activities over a specific microcontroller. A board unlocks the functionalities of microcontrollers and the possibility to use them in innovative ways without the need to set up power circuits on a breadboard. Therefore, it offers versatility and speed in prototyping novel IoT ideas around microcontrollers.

The most common components of an IoT development board are: (i) A power circuit, which can be run based on some power source (e.g., a 9V battery); (ii) An interface to a computing system (e.g., a Personal Computer (PC) or laptop), which provides the means for programming the microcontroller through a computer. For instance, embedded programs can be written in the computer and then transferred in the microcontroller; (iii) A set of input devices (e.g., buttons) which enable users’ interaction; (iv) A set of output devices such as Light Emitting Diode (LEDs); (v) A range of I/O pins, which enable the integration of additional sensors, actuators and IoT devices (e.g., motors, temperature sensors, output screens). Furthermore, IoT development boards provide: 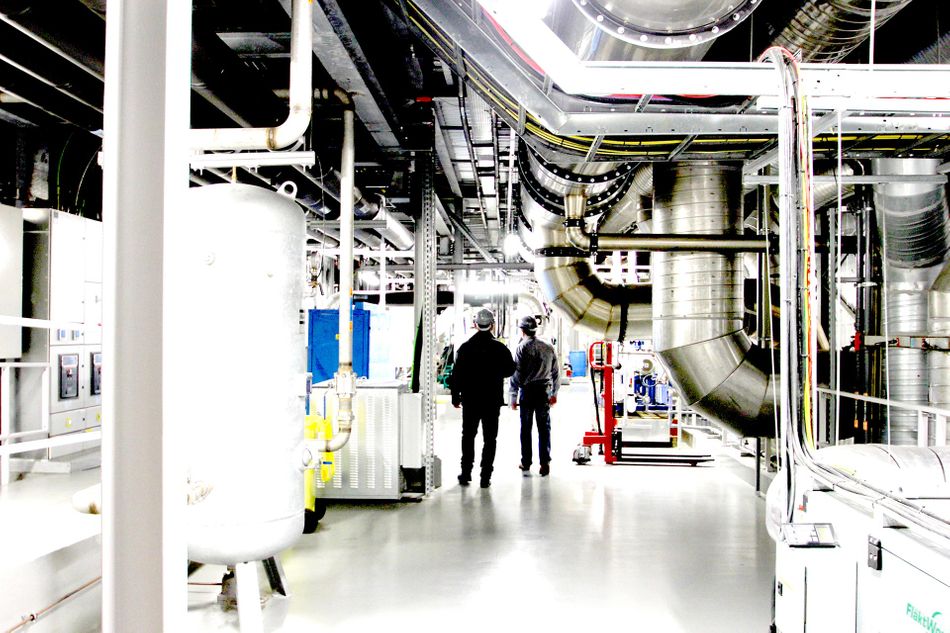 There are a variety of IoT development boards that serve different IoT requirements. They feature different capabilities and come at different prices. Furthermore, they belong to different vendors and form entire developers’ ecosystems around them. Most IoT device vendors provide their own development kits and establish entire ecosystems of developers around them. As a prominent example, there are many IoT boards that belong to the popular Raspberry ecosystem. For instance, the Raspberry Pi 3 Model B+ and the Raspberry Pi 4 Model B boards are excellent devices for prototyping and educational purposes. Raspberry Pi 4 Model B has a performance that is comparable to low-end Personal Computers with x86 processors, yet it also provides improvements in memory capacity and increases in processor speed, when compared to Raspberry Pi 3 Model B+. Both boards offer compelling power consumption characteristics.

The Arduino ecosystem is also very popular among hundreds of thousands of IoT developers. There are over 15 commercially available Arduino boards that support IoT development.  One of the most popular boards is the recently released Arduino Nano 33 IoT, which is specially designed to support IoT use cases that consider the form factor. It supports popular communication protocols such as WiFi and Bluetooth LE, as well as the hosting of machine learning models as part of the TinyML paradigm. As another example, IoT developers use IoT boards of the Arduino MKR Series, which provide support for various IoT communication protocols like LoRA, WiFI, SigFox, and NB-IoT.  These boards enable the development and prototyping of low-power, low-cost solutions over a variety of networking technologies. Most Arduino boards are integrated with the Arduino cloud, which enables developers to leverage the power of cloud computing in their IoT applications.

Similar to Arduino, Pycom provides various IoT Boards that are configurable in terms of the communication and networking technologies that they support. Yet Pycom started with support for WiFi and Bluetooth only, it is currently supporting five different communication options including Sigfox and LoRa. The unique selling proposition of PyCom boards stems from their emphasis on providing different communication protocols and on easing the task of configuring them.

Many hardware vendors are also offering IoT development boards and accompanying kits to support IoT application development over their microcontrollers. For instance, Intel provides the Intel Edison board, a small-sized compute module that runs a Linux distribution. It supports IoT applications that integrate tiny, power-efficient devices. Edison comes with 1GB of RAM and 4GB of flash storage, which makes it appropriate for a wide range of wearable and IoT applications. Furthermore, Edison comes with many different interfaces, which make it appropriate for a wide range of different applications.

One of the most versatile IoT development kits was recently launched by Disruptive Technologies (DT). Disruptive Technologies created the Sensor Starter Kit to help developers disrupt and fuel sensor solutions that will contribute to a more efficient, sustainable, and safe world. The sensor hardware and IoT infrastructure are built into the kit, which enables developers to test and build great things. DT designs and manufactures the world’s smallest commercially available, industrial-grade wireless sensors and enables IoT-enabled solutions in sectors like smart buildings and facilities management. Its sensor kit includes:

The kit provides an extremely versatile all-in-one solution, which does not require tedious set-up and pairing processing. Using the kit, it is possible to get up and running in a few minutes. Application development is a matter of adding DT sensors in the target applications and using cloud connectors to collect and communicate the data. The development process is greatly facilitated by Studio, while integration is based on popular methods such as webhooks and the use of REST APIs.

The kit has been designed and developed by developers for developers. It provides IoT developers with access to the hardware, IoT infrastructure, and documentation needed to start developing applications for prototyping, education, or business innovation purposes. Studio itself is built entirely on the Disruptive Technologies REST API, so developers can create similar web-apps to test out their own applications. 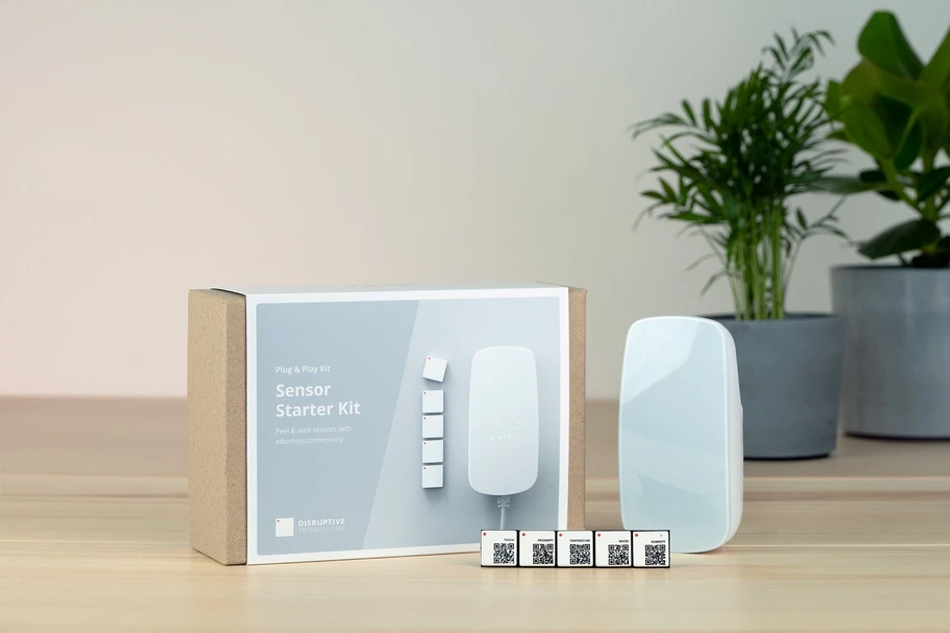 DT has also simplified the purchasing process, as buying a kit can be done by any developer or innovator without any business affiliation and interaction with sales. Moreover, the pricing of the kit is transparent, affordable, and without any hidden costs (e.g., there are extra costs for shipping or local taxes).

DT’s Sensor Starter Kit unlocks the innovation potential of DT’s tiniest sensors and is an excellent choice for developing IoT applications in areas like smart buildings, including the occupancy of rooms or desks, or smart cities and facilities management including water leakage monitoring. DT's sensors are among the smallest on the market, just 19 x 19 x 2.5 mm. They have a 15-year battery life in standard configuration, end to end encryption, and are effortless to install, just peel and stick. Additionally, they have an IP68 rating meaning they are highly protected against intrusion, dust, accidental contact, and water.  Read more about the way DT’s sensors have been applied here.

Leveraging the innovation capacity and longevity of DT sensors, the kit provides capabilities that can be hardly found in other IoT development kits. As such it is an important contribution of Disruptive Technologies to the IoT development community and the global IoT innovation ecosystem.

The Internet-of-Things promised a better world by connecting people, processes, and technology, but the technology was expensive, cumbersome, and limited. It also came with new privacy and security concerns, hindering adoption. In 2013, we saw this as an opportunity for a major constructive disrupt...

How To Improve Food Safety Programs With Sensor Technology

What is a Motion Sensor and How Does it Work