Robotic Spine Exoskeleton consists of two six-degrees-of-freedom parallel-actuated modules connected in series, each with six actuated limbs. Each module controls the translations/rotations or forces/moments of one ring in three dimensions with respect to the adjacent ring. Video & Images: Sunil Agrawal/Columbia Engineering

Designed by Columbia Engineers, RoSE is first device to measure 3D stiffness of human torso, could lead to new treatments for children with spine deformities such as idiopathic scoliosis and kyphosis

Spine deformities, such as idiopathic scoliosis and kyphosis (also known as “hunchback”), are characterized by an abnormal curvature in the spine. The children with these spinal deformities are typically advised to wear a brace that fits around the torso and hips to correct the abnormal curve. Bracing has been shown to prevent progression of the abnormal curve and avoid surgery. The underlying technology for bracing has not fundamentally changed in the last 50 years. 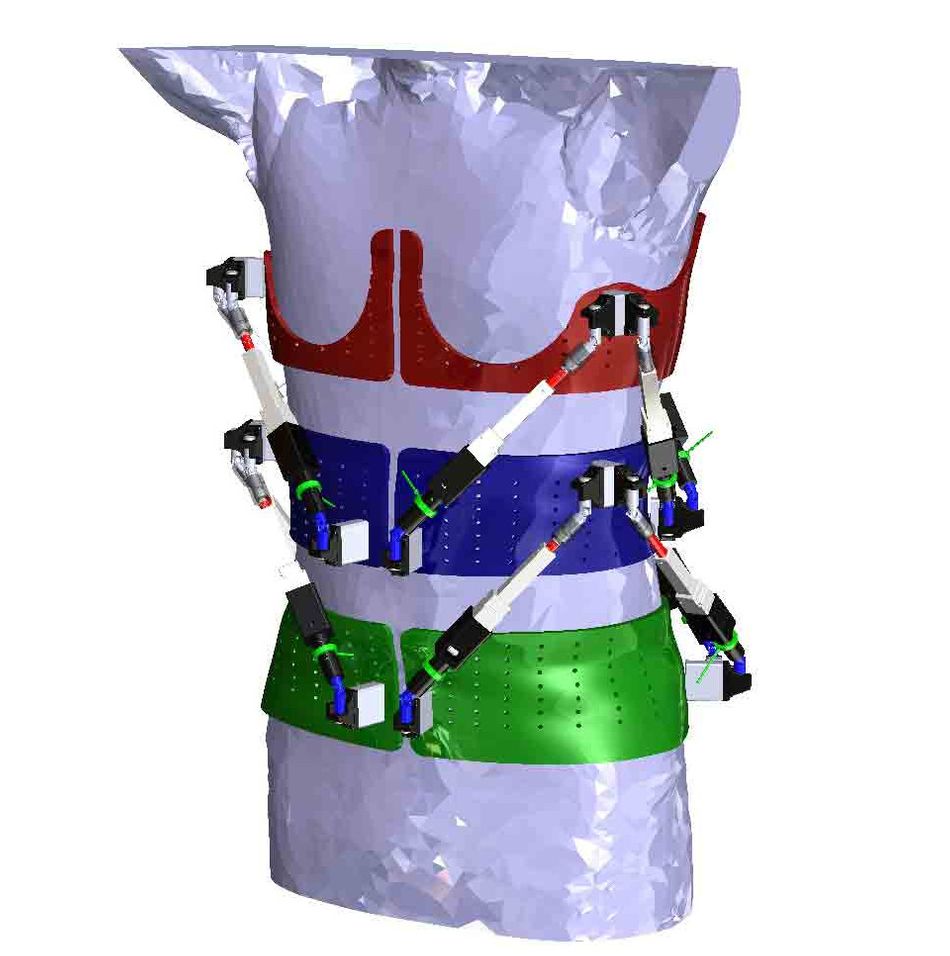 Robotic Spine Exoskeleton consists of two six-degrees-of-freedom parallel-actuated modules connected in series, each with six actuated limbs. Each module controls the translations/rotations or forces/moments of one ring in three dimensions with respect to the adjacent ring. Video & Images: Sunil Agrawal/Columbia Engineering

While bracing can retard the progression of abnormal spine curves in adolescents, current braces impose a number of limitations due to their rigid, static, and sensor-less designs. In addition, users find them uncomfortable to wear and can suffer from skin breakdown caused by prolonged, excessive force. Moreover, the inability to control the correction provided by the brace makes it difficult for users to adapt to changes in the torso over the course of treatment, resulting in diminished effectiveness.

To address these deficiencies, Columbia Engineering researchers have invented a new Robotic Spine Exoskeleton (RoSE) that may solve most of these limitations and lead to new treatments for spine deformities. The RoSE is a dynamic spine brace that enabled the team to conduct the first study that looks at in vivo measurements of torso stiffness and characterizes the three-dimensional stiffness of the human torso. The study was published online March 30 in IEEE Transactions of Neural Systems and Rehabilitation Engineering.

“To our knowledge, there are no other studies on dynamic braces like ours. Earlier studies used cadavers, which by definition don’t provide a dynamic picture," says the study’s principal investigator Sunil Agrawal, professor of mechanical engineering at Columbia Engineering and professor of rehabilitation and regenerative medicine at Columbia University Vagelos College of Physicians and Surgeons. “The RoSE is the first device to measure and modulate the position or forces in all six degrees-of-freedom in specific regions of the torso. This study is foundational and we believe will lead to exciting advances both in characterizing and treating spine deformities.”

Developed in Agrawal’s Robotics and Rehabilitation (ROAR) Laboratory, the RoSE consists of three rings placed on the pelvis, mid-thoracic, and upper-thoracic regions of the spine. The motion of two adjacent rings is controlled by a six-degrees-of-freedom parallel-actuated robot. Overall, the system has 12 degrees-of-freedom controlled by 12 motors. The RoSE can control the motion of the upper rings with respect to the pelvis ring or apply controlled forces on these rings during the motion. The system can also apply corrective forces in specific directions while still allowing free motion in other directions.

Video—part of supplementary material that will be published with the paper—describes the design and fabrication process used in developing the Robotic Spine Exoskeleton. Video & Images: Sunil Agrawal/Columbia Engineering

Eight healthy male subjects and two male subjects with spine deformities participated in the pilot study, which was designed to characterize the three-dimensional stiffness of their torsos. The researchers used the RoSE, to control the position/orientation of specific cross sections of the subjects’ torsos while simultaneously measuring the exerted forces/moments.

“We built upon the principles used in conventional spine braces, i.e., to provide three-point loading at the curve apex using the three rings to snugly fit on the human torso,” says the lead author Joon-Hyuk Park, who worked on this research as a PhD student and a team member at Agrawal’s ROAR laboratory. “In order to characterize the three-dimensional stiffness of the human torso, the RoSE applies six unidirectional displacements in each DOF of the human torso, at two different levels, while simultaneously measuring the forces and moments.”

While this first study used a male brace designed for adults, Agrawal and his team have already designed a brace for girls as idiopathic scoliosis is 10 times more common in teenage girls than boys. The team is actively recruiting girls with scoliosis in order to characterize how torso stiffness varies due to such a medical condition.

“Directional difference in the stiffness of the spine may help predict which children can potentially benefit from bracing and avoid surgery,” says Agrawal.