Many of our daily activities involve our hands’ prehensile abilities. While able-bodied people don’t think twice when using a spoon or lifting a glass, these actions are nearly impossible for someone unable to grasp things with their fingers. Nearly 12 million people worldwide survive a stroke every year, and half of them are left with at least some limits on the use of their hands. Various portable, robotic systems as well as human-machine interfaces have been developed over the last few years to address this problem, yet they are typically too complex or expensive for daily use.

Emovo Care has now come up with a device that is specifically designed to overcome these obstacles. The startup’s engineers developed Emovo Grasp with the help of disabled users over the course of several years, and then improved it further through several rounds of testing in hospitals and rehabilitation centers. The company recently gained an ISO European certification needed to market their product as a medical device.

The term “exoskeleton” often has daunting, futuristic connotations. In recent years, however, these devices have gotten smaller and smaller and will soon be available for regular use by those who most need them. Emovo Grasp consists of two patented, artificial tendons resembling thin cables inserted into a sheath. They attach along the back of the hand using silicon rings placed on each finger. The motor and the remote control, which lets the user adjust the force being applied, are in small, separate cases. This design frees up the palm of the hand and the tips of the fingers in order to maximize sensory input.

When activated by the user, the device applies light pressure on the index then the middle finger so that they each pivot and come into contact with an object. The hand automatically adjusts its grasp on even irregularly shaped objects to ensure the most natural movement possible. Another button on the remote control gives the opposite command, so that the cables generate a pulling force that causes the fingers to straighten and release the object. The artificial, bio-inspired tendons are similar to the hand’s natural system of muscles and tendons. “Our design produces both gentle movements and a strong grasp,” says CEO Luca Randazzo, who developed this technology during his thesis and postdoc at the EPFL Brain-Machine Interface and Biorobotics Laboratories. The device itself never acts on its own – the user is always in control so they can avoid dropping things or gripping at the wrong time.

Patients could train for an extra 15 minutes each day following their standard treatment, or take the device home to continue their rehabilitation. This device is very promising because repetition is key to progress.

“Repetition is key to progress” 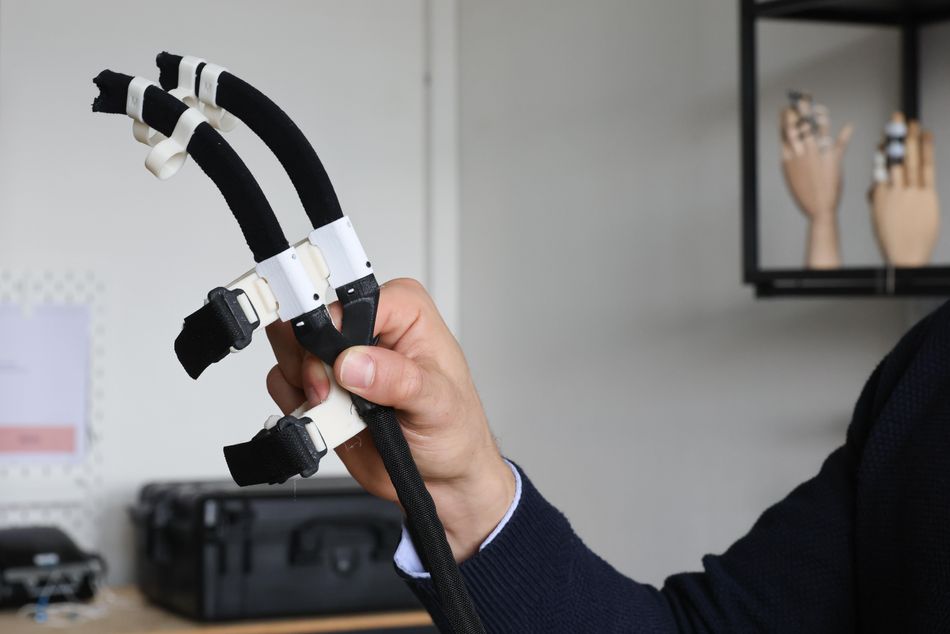 More than a hundred people – patients, therapists and neurologists – provided input on Emovo Grasp through longitudinal studies and guided discussions during the device’s development process. Recently, its benefits have been noted by neurologists and therapists at the Centre Rencontres de Courfaivre in the Jura region, and in Italy and Austria, where around 30 brain injury patients are currently participating in a clinical study. Anne-Lise Joray-Tendon, a physiotherapist at the Centre Rencontres, sees great therapeutic value in the device: “Patients could train for an extra 15 minutes each day following their standard treatment, or take the device home to continue their rehabilitation. This device is very promising because repetition is key to progress.”

The startup is only a small part of Randazzo’s mission. “My sister is disabled, and I’ve always been keen to develop simple devices that can help people in their everyday lives,” he says. Emovo Grasp is not designed to restore full functionality to the user, but enabling a disabled person to make even a few essential movements is often a small revolution in itself.

“I remember the first time I tried this device out,” says Balz Heusler, one of the first users. “The next day, after seven years of complete immobility, I could move my index finger two millimeters without help – that was amazing.” Emovo Care co-founder and COO Iselin Frøybu adds: “We are still collecting data to develop reliable statistics, but patients report that after the first few uses they feel that their hand is part of their body again, whereas they used to just neglect it.” 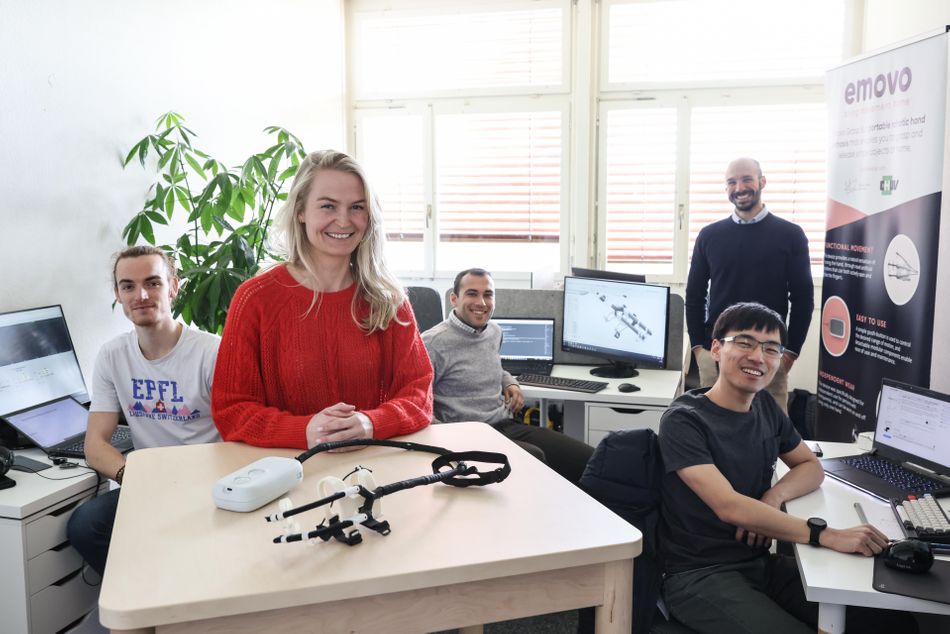 “We’re now a recognized medical device company and not just a team of engineers making cool things in their lab,” Randazzo says with a smile. The company has sought to keep the cost of Emovo Grasp down to make it accessible to more people, and they made it easy to use so that patients can operate it on their own.

Emovo Care will provide its device to clinics and research institutions interested in collaborating. And the company is currently raising funds with an eye towards a market launch next year. After that, they plan to further develop their invention. “For example, we plan to integrate an application that compiles data to show patients where they are in the rehabilitation process,” says Randazzo, “and we want to add more intuitive control features, such as interpreting the patient’s intention through brain or muscle signals.”